Fishing Tails > All Articles > Reports > Chesil Beach > The Star bait for Cod!
Size Matters A quite weekend, thank goodness for the Flounder 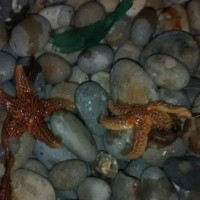 The Star bait for Cod!

I like to keep my fishing as simple as possible, but I am always open to suggestions when it comes to trying new baits, especially when those baits are seasonal. I had a pictured added by Sam Master to a recent Facebook post that I had put up. It is of two Starfish that he caught on Ragworm.

Another experienced local angler commented that this large influx of Starfish occurs every 7-10 years and that the Cod were feeding on them. Having seen Starfish in the stomach content of Bass and Cod before, I can well believe this. So has anyone tried using Starfish as a bait? The next time you catch one , it may well be worth hooking one on to a size 4/0 hook and casting it out. I know I will if I get one in the next few weeks.

I am impressed with the reaction from yesterdays post on Bass stocks. It is good to hear other peoples thoughts on this subject. If you didn’t see the article or want to see the comments then take a look at the link Size Matters

It looks like we could well be in with a better weekend for Codling this weekend, as the tides are far better than last weeks. What is exciting is that quite a few summer are still around. I was guiding on Chesil on Monday, targeting Cod. Whilst waiting for the bites I decided to set up for some Garfish, which I have had good success with during December in previous years. Not only did we get plenty of Garfish, but we managed Mackerel as well. In the end we managed Codling and a 4lb+ Wrasse that took the rod tip right over. We were a little disappointed that it wasn’t a big Cod, but it was welcome all the same.

Chesil Beach forecast: Unlike last weekend there is a good chance of picking up a Cod. December normally produces the larger ones, but as usual they will be pretty scarce. Whiting will be around in numbers especially towards Abbotsbury.

Expect Garfish from all along the beach, but the Plaice seem to have moved off.

Portland Harbour: This is probably the last set of tides that I would expect to see decent numbers of Bass in the harbour. These will be replaced with quite a few Flounder for the next few months.

Weymouth Bay: Still plenty of fish coming from both piers, especially Whiting. Unfortunately they are mostly small fish. I would still expect to see Pollock and Wrasse from the Stone Pier. Have a go at float fishing with some Mackerel strip for Garfish and Pollock

Leo reports that we are now getting into the peak of the Flounder fishing, with catches expected at all the popular marks.

SUBSCRIBE
Size Matters A quite weekend, thank goodness for the Flounder

One Response to "The Star bait for Cod!"