Fishing Tails > All Articles > Reports > Freshwater Fishing > The Perils of Dating Film Stars in Public
A great year for Smoothound Gurnard, the fish of the summer 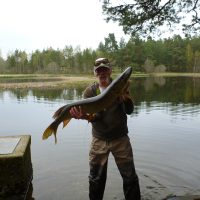 The Perils of Dating Film Stars in Public

Allegedly the best way of keeping something secret is to have it in the open for everyone to see. This has definitely been the case with my alien hot-spot, the duck pond. Every man & his dog walks past, not to mention the mums with pushchairs, kids on bikes, foreign tourists on a post dinner stroll… you get the idea. “No fish in there mate!” they cheerfully exclaim. Followed, more often than not, by “Feckin’ eejit” muttered under their breath. Little do they know; I conduct my illicit affair with Ellen Ripley under the public gaze, and none of them suspects a thing…

Except maybe the coach load of Germans who wandered past just as I hooked into a 38” monster which erupted from the surface of the pond in a blur of slashing teeth, gleaming green & gold flanks and flaring gills. Aye, that was something for them to point their cameras at sure enough.

Or maybe the poor young lady (also foreign, incidentally) I accosted, late on another evening, dripping with water and weed, to help me photograph the fish of a lifetime; a 46” leviathan that must surely have accounted for entire broods of ducklings over the years. She took a pretty good photo, too! 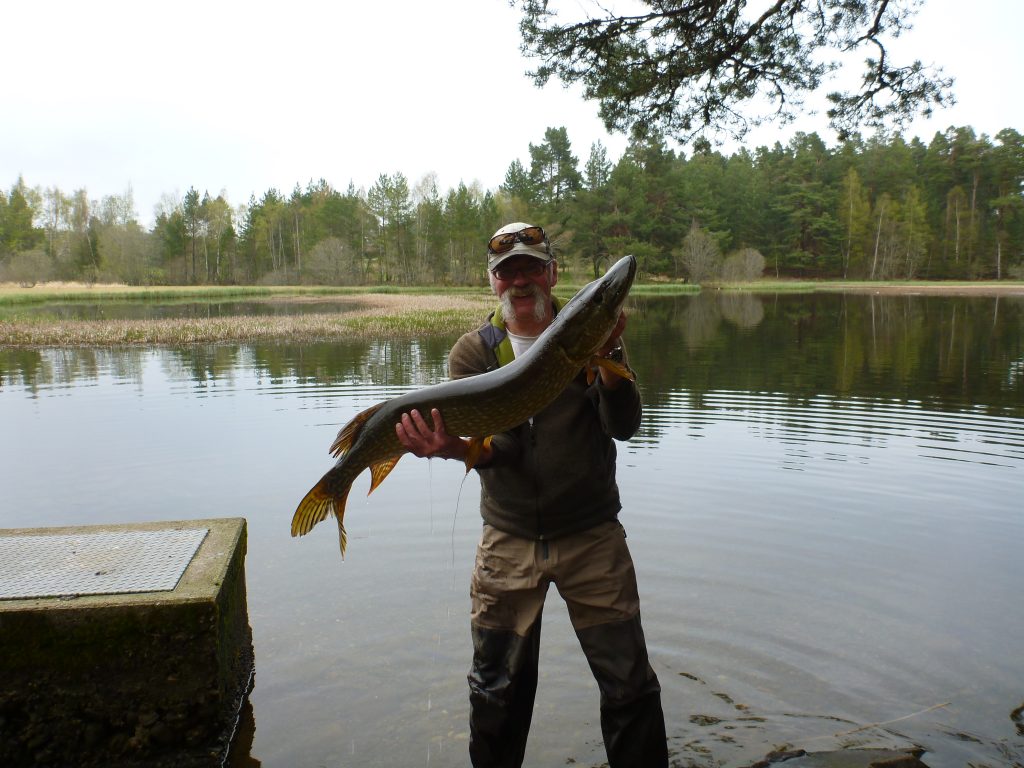 But all good things come to an end as they say and the writing is definitely on the wall for this particular avenue of pleasure. I suppose it’s only to be expected that if you stand in the middle of your local duck pond waving a stick (to paraphrase a well-known fishing writer) often enough, sooner or later another angler’s going to catch you in the act; metaphorically in flagrante with your unseen muse. And so it proved to be.

“Was that you I saw in the middle of the duck pond with the fly-rod the other night, Dave?”

“Tuesday night, I think it was?”

“Possibly Monday….” (attempting to muddy the waters a bit)

“Anything in there? I thought it might be a good spot for pike”

“Couple of little jacks, more just a bit of fun of an evening, that’s all” (somewhat unconvincingly)

“Apparently there were some golden orfe in there a few years ago, so I thought I’d have a look” (a frantic attempt at distraction)

“I would have thought it was perfect for a good pike or two. Nice reed beds, not too much disturbance, all those ducklings to feed on……” 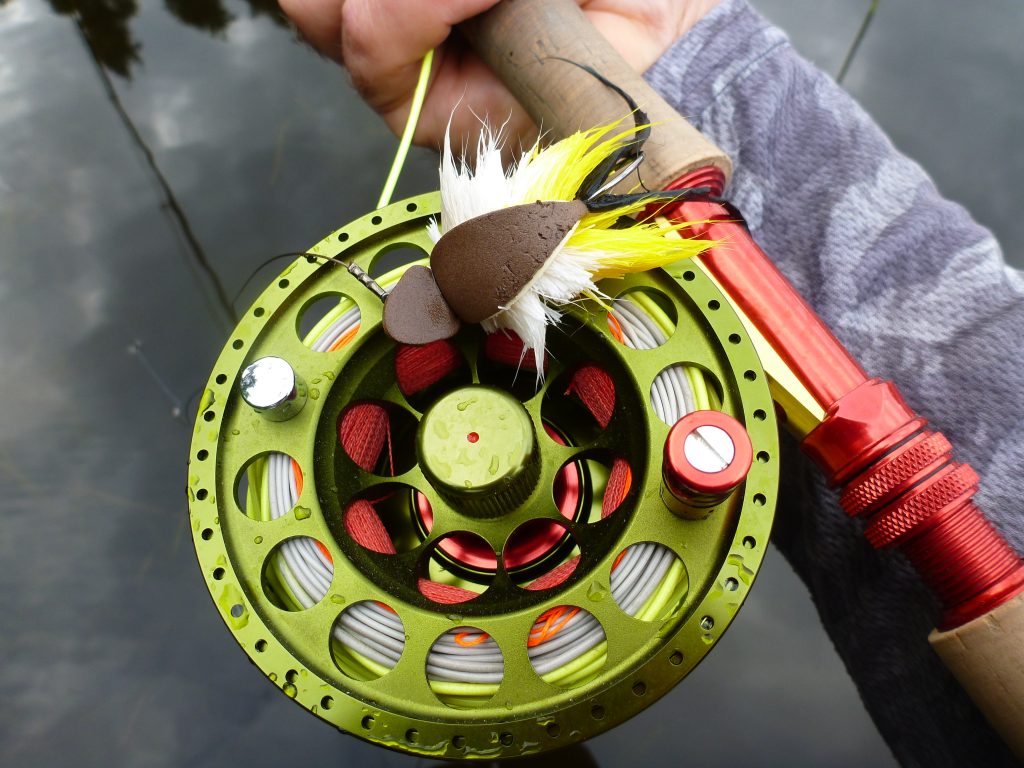 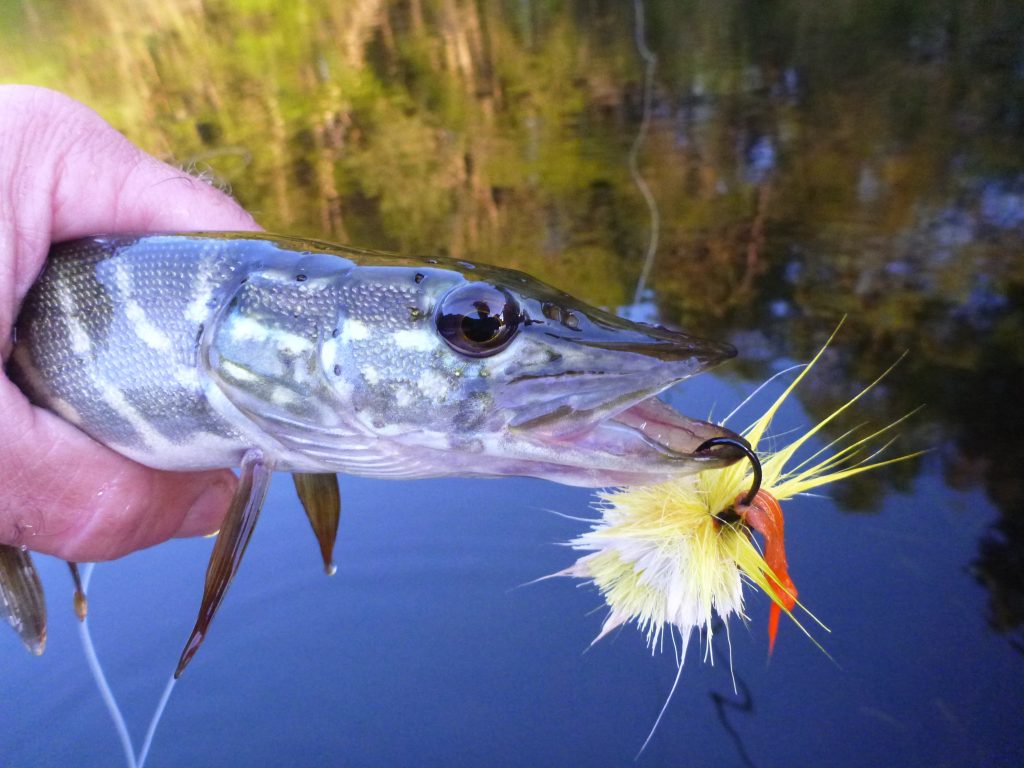 (Note: Pike are referred to colloquially as “aliens” by some fishermen, especially in Scotland; hence the Ellen Ripley connection)

SUBSCRIBE
A great year for Smoothound Gurnard, the fish of the summer