Fishing Tails > All Articles > Reports > Chesil Beach > The first of the Plaice have arrived on Chesil Beach
Whats the water clarity like on Chesil? Who let the Dogs out

The first of the Plaice have arrived on Chesil Beach

Are the Plaice in on Chesil yet? Almost right on schedule the first Plaice have started to show on the western marks of Chesil. I took a drive down to Lyme Regis yesterday, and stopped off at Abbotsbury, West Bexington and Cogden, to see what if anything was being caught down there. West Bexington was the busiest mark, with over 30 anglers lined out either side of the car park. You can bet that it will be very busy for the next few weekends. Only a couple of the anglers I spoke to had managed to connect with the Plaice, and all of those were caught on Ragworm

As is usual the Plaice will trickle in for the next few days, but the next set of spring tides towards the end of next week, will probably see a lot more arrive. Top local angler Dave Lane had a good session at Abbotsbury with half a dozen Dogfish, some Rockling and four Plaice up to 42cm. Chances are Dave picked the fish up at range.  The Plaice I have seen so for this year have not been as skinny as they normally are after spawning. 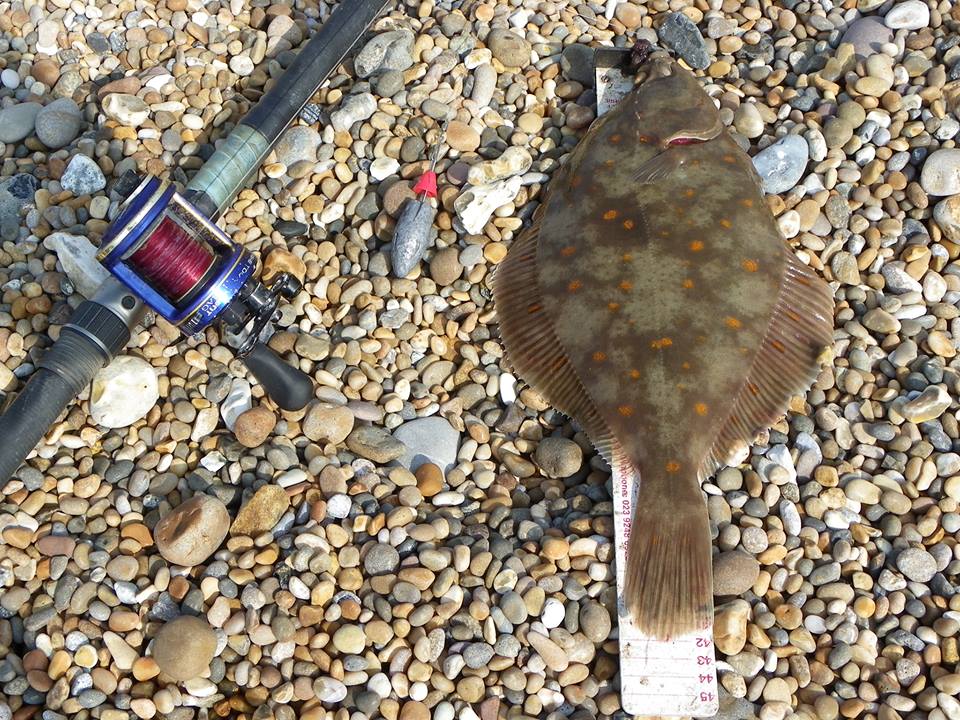 Whist I was down on the beach, I spent some time casting with just a lead and braided line to search the bottom, in an attempt to find out how much it has changed. Surprisingly the western end of the beach has not changed as much as the Chesil Cove end. Obviously I was only able to check part of the beach, but I could find quite a few clay beds, which is where you want to be hitting in search of the Plaice.

If you want to have an idea of some of the changes at Chesil cove have a look at this video from Izzy Imset of Under Water Explorers.

Chesil Beach:  Calm  the water has a milky tine to it.

Chesil Beach forecast: Is it worth rushing down to Chesil in search of an early plaice? I personally would wait until next weekend, when you have a better chance of picking a few up. If you are going after the Plaice, then try a few casts with a grip lead to try and find the clay beds. Cast as far as you can then slowly wind in your lead, trying to feel where it might stick into the clay. It is easier if you have a reel with braid, as you can feel the changes in the bottom a lot easier. Once you have work out where the clay is, then try to cast into that area.

Best baits will be Ragworm, Peeler Crab and Mussels. Have a look at the link at the bottom of the post for tips on using mussels. I normally use a single hook clipped rig, to try and get the maximum distance. The longer casters almost always catch the most Plaice.

Whilst I was down on the beach yesterday, I noticed a lot of bird activity. At times there were over a 100 birds diving into the water about 200m out. This may have been a large shoal of mackerel chasing bait fish. Maybe I am being overly optimistic, but the Mackerel did show in mid March two years ago.

Portland: I have yet to get out after the Pollock on Portland, but I  am looking forward to trying for them on lures. Tide times are good around dusk for the next few days, which will increase your chances of catching them. I like to use White sidewinder or MegaBass Metal X Bubblehead lures for the Pollock.

It is still a bit early for Wrasse fishing, but if you are down there during the day, it is always worth a try using Ragworm.

Weymouth Bay: The Mullet in the harbour are slowly increasing in numbers. I think that there will be quite a few arrive in the next couple of weeks. They often shoal up along Weymouth Beach, before heading into the harbour. Flounder are still being caught from Preston and Greenhill. Along with small Whiting and Pout after dark.