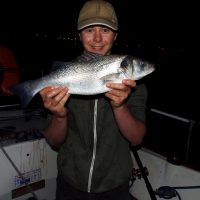 This story takes me back to the beginning of the summer when the rivers were closed and I was left without a venue to fish. After a successful winter’s piking, my friend and I wanted a new challenge and through a series of coincidences, I was given a great opportunity. Following a chance meeting at a Pike Angler’s Club coaching day in the autumn Ian and I struck up a friendship which has since carried us up and down the country in pursuit of fish. It was around this time that I was really getting into my sailing and by coincidence it transpired that Ian had a 26ft yacht. After an invitation and a short cruise, we hatched a plan to target fish along the Essex coast using the boat. 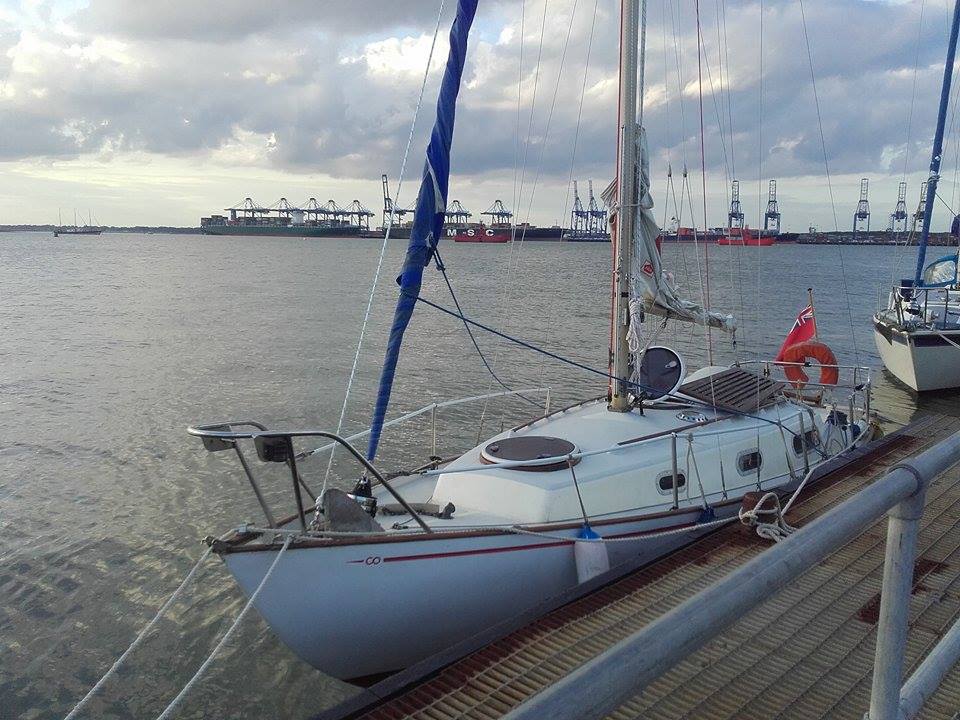 Time was spent studying charts, before deciding on a mark in the Crouch estuary. There was a deep hole of around 5 metres surrounded by water of 2 metres and this seemed an obvious choice for our first session.

We set off early to catch the ebb off the mooring in Burnham on Crouch and arrived at the mark shortly before low water. We only had a few hours here, as we needed to catch the last of the flood back up the river to avoid getting caught fighting the tide, so we were quick to get the rods out once I had dropped the anchor. Whilst we had been sailing downriver, I had tackled up 2 rods with running rigs, consisting of a 3/0 Sakuma Manta hook, 5ft of 40lb mono, a swivel and beads and a lead running on a snap link so it could be quickly changed to compensate for the increasing tide.

Two squid baits were sent over the stern and all that was left to do was wait. I soon discovered the perks of fishing from a yacht and it was great to be able to make tea, cook meals and tie rigs with ease inside the cabin, unlike the many freezing hours I usually spend on a beach trying to catch the same species.

After a couple of hours, it was apparent this wasn’t going to be an action-packed session, but I soon had a bit of entertainment when Ian went to recast his rod… He won’t thank me for including this, but I’ve done my fair share of embarrassing things whilst fishing and write this light-heartedly.

When he picked the rod up it took on a substantial bend and he began pumping the unseen “fish” off the bottom. When it was a short way up, the clutch on his real released a load of line and whatever it was returned to the bottom once more and this continued for a good ten minutes while he tried in vain to bring the mysterious object to the surface. Following reports of big stingrays being caught throughout Essex, Ian was convinced this was what he was attached to, but I wasn’t so sure, and eventually he accepted he’d been fighting the anchor chain!

Once a new rig was tied and cast, he quickly redeemed himself when a series of knocks left him attached to a hard fighting thornback. Not the biggest fish, but great sport on the light gear.

By this time, the wind was increasing to concerning strength and as it was against the tide a large swell was building. Ian wanted to call it a day, but I persuaded him to stay a short while longer and it was a good job I did as shortly afterwards I had a sharp knock on the rod tip. This was followed a few seconds later by the tip pulling down and I wasted no time in setting the hook. I was using a light jerkbait rod as it was manoeuvrable in the confines of the boat’s cockpit, and even this modestly sized thornback gave a good account of itself. Before long Ian had netted it, and after a few pictures, it was released. 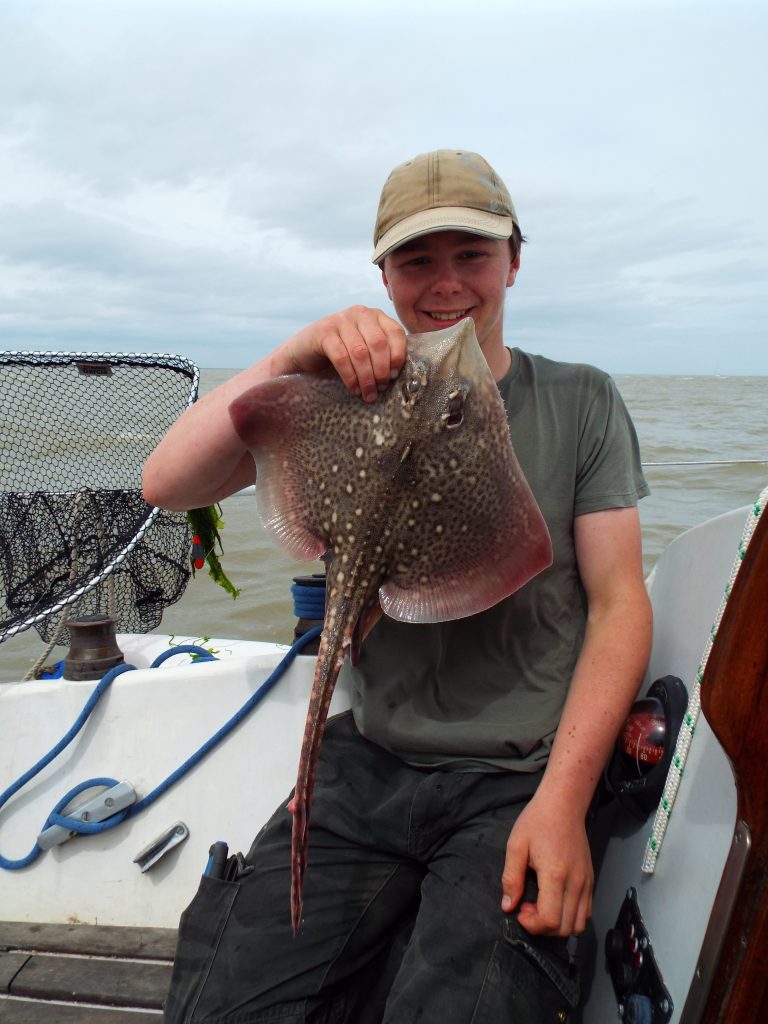 At this point, we really did need to head in, as the wind was a force 6 and the river was getting increasingly choppy. I donned my life jacket, clipped onto the wire and went to the bow to lift the anchor, and before long we were underway. As we were sailing back into the river, the UV strip on the side of the Genoa (headsail) ripped, so we quickly furled it and did the rest of the trip under engine.

Once on the mooring, we needed to get the ripped sail down so it could be repaired, and as my rod was still baited I thought I’d chuck it out while we did this. We’d just finished packing the sail into its bag when to my surprise, the rod started knocking violently. Obviously a bass bite, I quickly lifted into it, but unfortunately the hook pulled as it reached the surface. I dropped the bait back, hopeful of another fish after my immediate success, but little did I know the next bite was a long way off. This fish had taken the bait over slack water at the top of the tide and those of you who have fished the Crouch will know how strong the tide is during the ebb. The next 6 hours were a complete waste of time and in the end, we wound in and rowed ashore to get some food.

Back on the boat, we waited until the tide run decreased, then both cast large squid baits amongst the moorings. That evening we witnessed one of the most incredible sunsets and as darkness fell I had a good feeling about the night ahead. 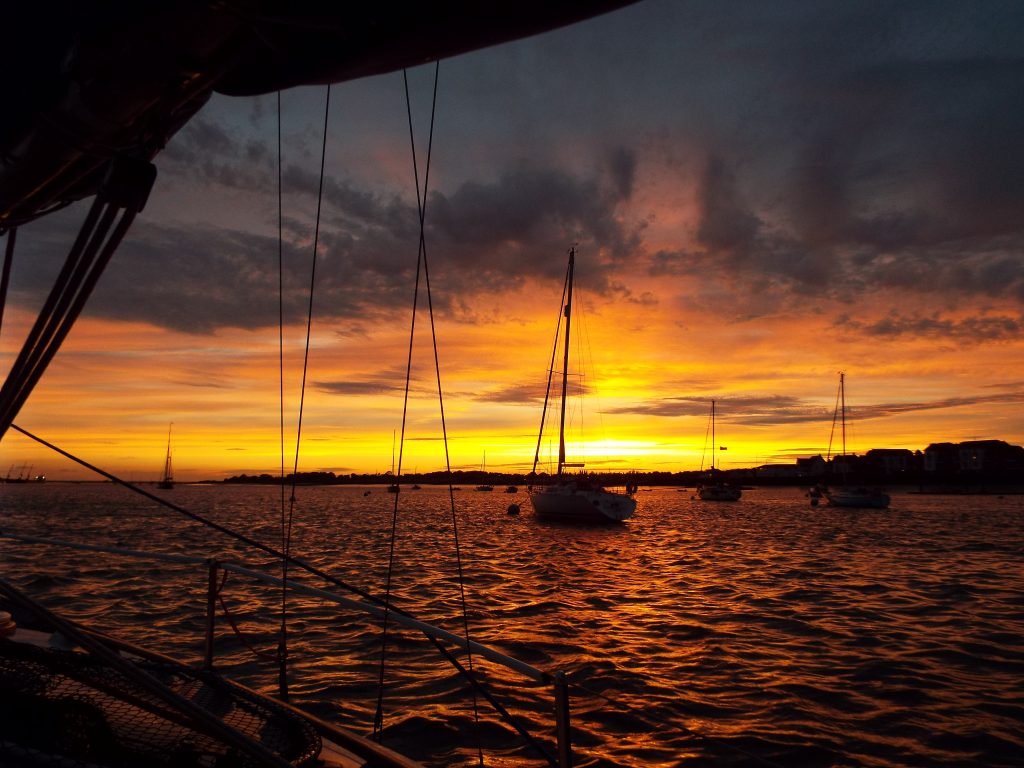 Once it was dark we were sitting watching the tips silhouetted against the skyline, when my rod had a series of knocks. I picked it up, but there didn’t appear to be a fish on the end, so I recast with a fresh bait and sat down to wait once more. Just before midnight, my rod exploded into life. The tip hooped over and the ratchet screeched as an angry bass took off downtide, I was on the rod immediately and soon had the better of the fish. As it approached the net it seemed to grow and grow and once it was onboard we were both surprised by the size. It was a fish of well over 4lbs, incredible for my first bass from the river, leaving us with high expectations for the night ahead. 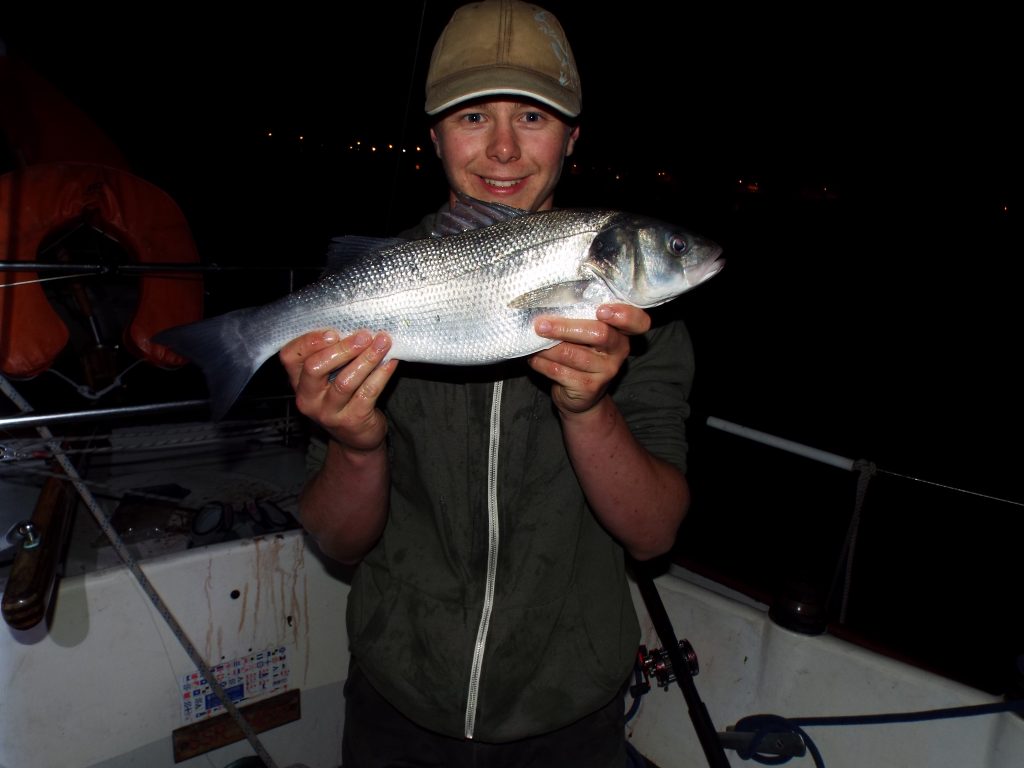 Once the fish was photographed and released I vowed I would fish all night to try and catch another and after telling me I was mad, Ian retired to his bunk to get some sleep. I should have known better following the unproductive 6 hours that evening, but nevertheless, I persevered with my squid baits in the hope of another big bass. High water came just as it was getting light at around 5am and as the tide slackened off I began fishing hard again. As I was rebaiting a rig, the remaining rod screeched into life as the fish took line from the reel. The take was violent enough to wake Ian just from the noise of the ratchet and he was soon at my side with the net as I pumped the fish up towards the boat. I was expecting a slightly better fish following my earlier success, but I was still pleased when a fish of a couple of pounds was boated. This fish was also released after pictures and despite another few hours fishing through the morning, no more action came to the rods. 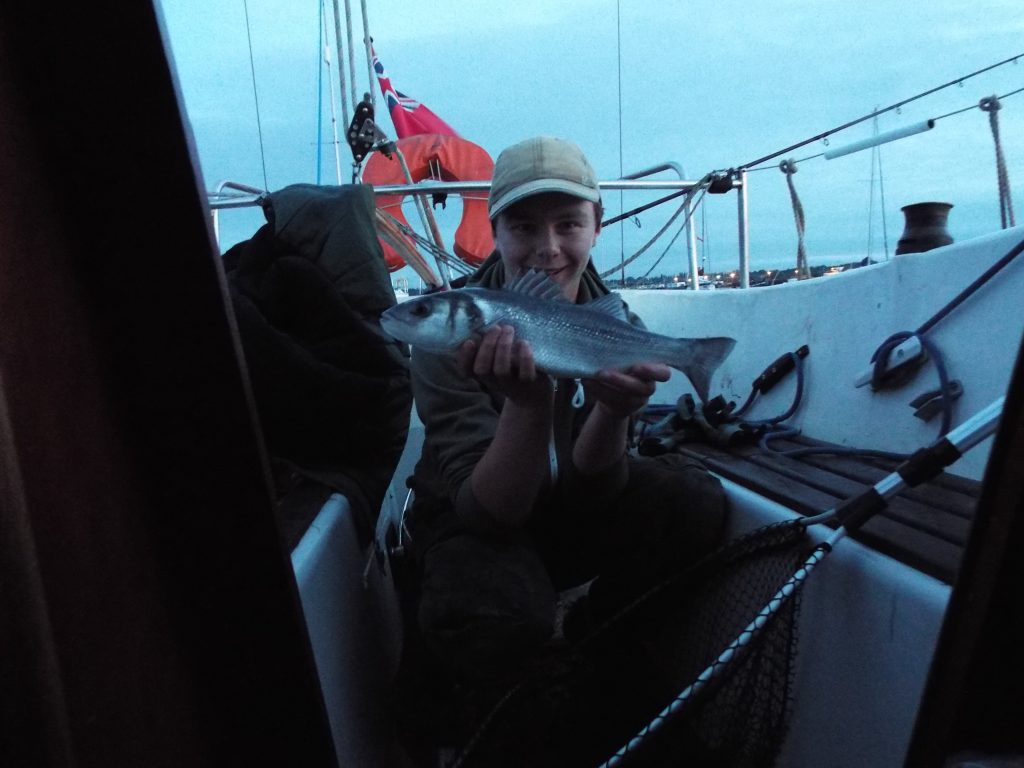 In total, I had fished for almost 18 hours, but all the bass bites, as well as one of the skate, had come just as the tide turned at either high or low water, an observation I hoped to make use of during our next session a few weeks later.

In the meantime, Ian tried bassing on the river again, but despite losing a small one due to a hook pull he failed to boat any fish. On our next trip we tried another deep hole in the mouth of the river, but shortly after getting the rods out we were approached by the Foulness Sand MOD Range Safety Boat and asked to move as they would be blowing up ordnance. We relocated to the other side of the river and cast the rods into the deep water channel in the hope of picking up more thornback rays. This didn’t quite go to plan but after a few hours, I had a series of knocks followed by a slackliner. Once it was on the surface I could see it was a shark, and following a successful session smoothound fishing the week before I assumed it was a hound pup. It was a good job I checked before unhooking it, as it turned out not to be a smoothound but in fact a tiny tope, which for the size had a wicked set of teeth! 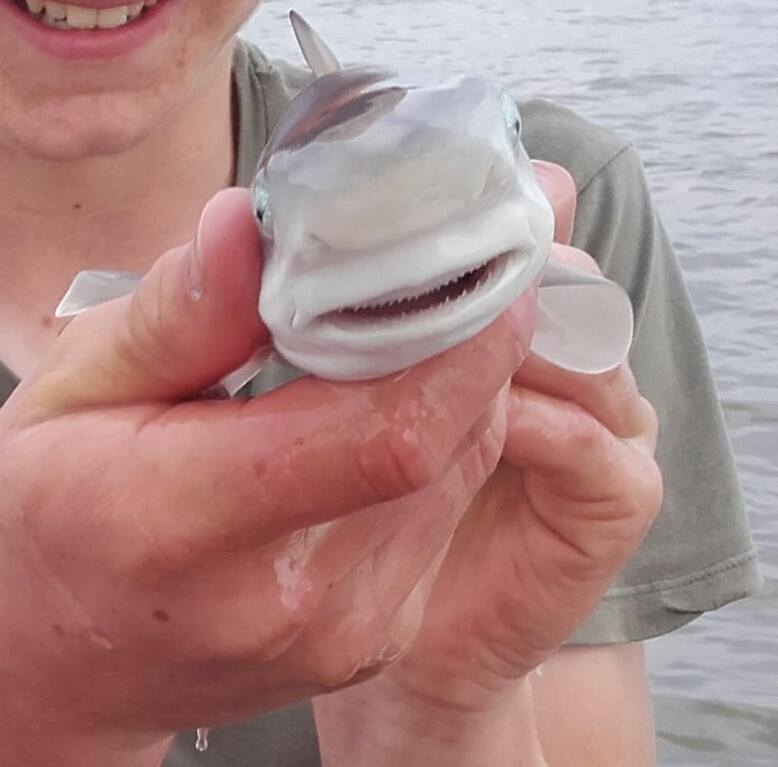 After this, the action dried up and except for one small eel, no more fish  fell to the rods. At this point the weed was getting ridiculous, so we decided to wind in and wait for the turn of the tide with the previous trip’s success in mind.  We moved to the same mark we had fished the previous session for the evening but unfortunately, there were no more bites for either of us and once it was dark we accepted defeat and returned to the mooring. I had a short-lived but enjoyable campaign aboard the yacht that Summer and although we did a few more trips we didn’t catch anything of note. At that point the rivers were open and there were carp to be caught, but I hope we can get out again earlier next year to catch the run of big female thornbacks in Spring. 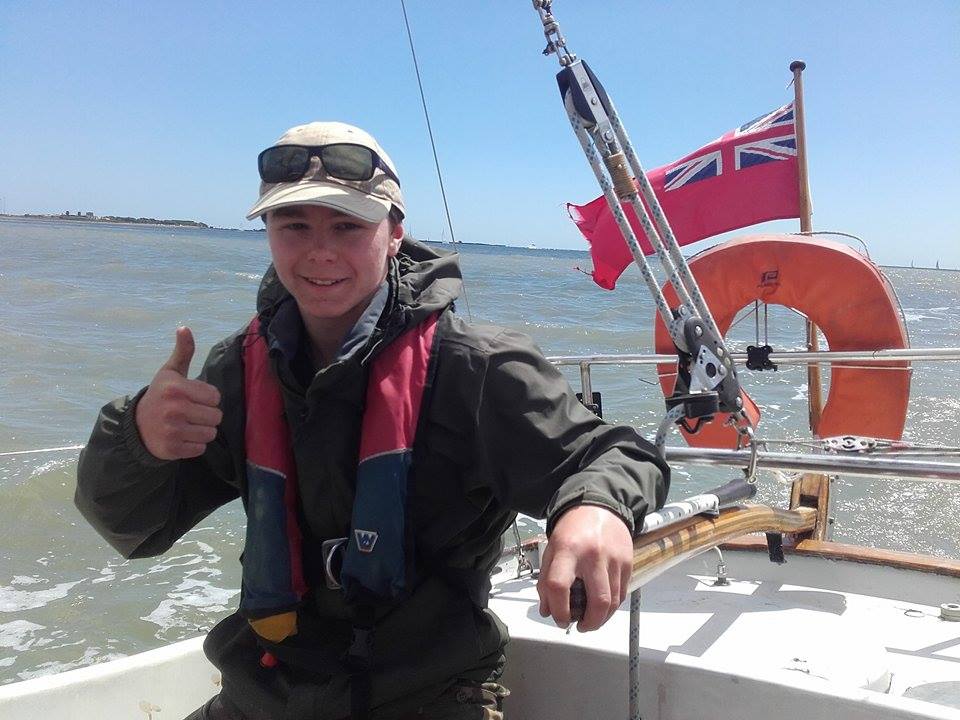