Fishing Tails > All Articles > Reports > Boat Fishing > Shark fishing in the UK
Where are the Mackerel? Fishing forecast and Catch reports for Chesil Beach, July 2020 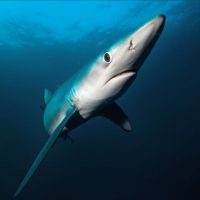 Shark fishing in the UK

Over the past few years Shark fishing has had a resurgence of popularity. Back in the70’s and early 80’s I used to read in awe about the shark fishing from ports out of Cornwall. Unfortunately in those days you would often see the sharks strung up as trophies, rather than released as is the usual practice these days.

It is my plan to get out on a number of trips this year in search of sharks. Luckily there are a number of charter boats that offer specials trips such as Force 10 Fishing, based out of Plymouth and run by  Simon Thomas. Over the next few months I will be writing a number of articles and creating several videos on big game fishing in the UK. In the first of these articles I have persuaded Simon to set the scene and share his love of one of the most impressive predators that visit our waters.

The Blue Shark: The wanderer of the deep blue.

“They’re beautiful – God, how beautiful they are!

They’re as graceful as any bird and as mysterious as any animal on earth.

Blue Sharks those almost impossibly azure-blue summer visitors that cross oceans to get here have transfixed me since I saw my first live shark over twenty years ago. Not the drab, sorry looking creature with dead eyes and faded hue, which used to be paraded up on a hook for tourists to gawp at, but the sinuous graceful ghost, a shy cautious wisp when alone, a careless cavalier when not. Not the pugnacious bulk of the Porbeagle, a more typical looking shark to the public, but a long almost serpentine beauty, suited to its endless travels around the oceans and how they travel. They are restless wanderers, rovers who may cover 3000 miles in a year and many times that during their 20-year lifespan. An oceanic glider, whose long pectoral fins and flattened belly are perfectly evolved to provide lift, an essential quality needed for an animal which lacks a swimbladder, enabling them to ride the ocean currents with minimum effort. Tagging studies have revealed the extent of the Blue Sharks wanderlust and individuals have traversed entire ocean basins during their life span.

The open ocean still varies between desert and fertile and the Blue Shark is an expert in traversing the former to reach the latter. Much like the ancient mariners they crudely use the earth’s magnetic field to navigate, although the identity of this biological lodestone is still a mystery. Whilst Blue Sharks use the North Atlantic currents to move across oceans to find food, avoid or attract mates or to find conditions to their liking; the females use the barren areas of the deep tropical Atlantic to birth, an unusual strategy among sharks. Where possible they follow the edges of continental shelves during migrations, where the cold, nutrient-replete waters from the abyss surge toward the surface, providing a relief from the poverty of the open ocean. Whilst in the productive waters on the continental shelf, these sleek warriors still seek out features where the likelihood of prey is at its highest. Not necessarily the wrecks or reefs that pollack, cod or ling may favour, but the ocean fronts, where bodies of water collide or up-wellings where nutrient-rich water from below the summer thermocline thrust towards the surface. They are both areas of plenty, where sunlight and nutrients combine to fuel the food chain and provide the Blue Sharks with ample sustenance. 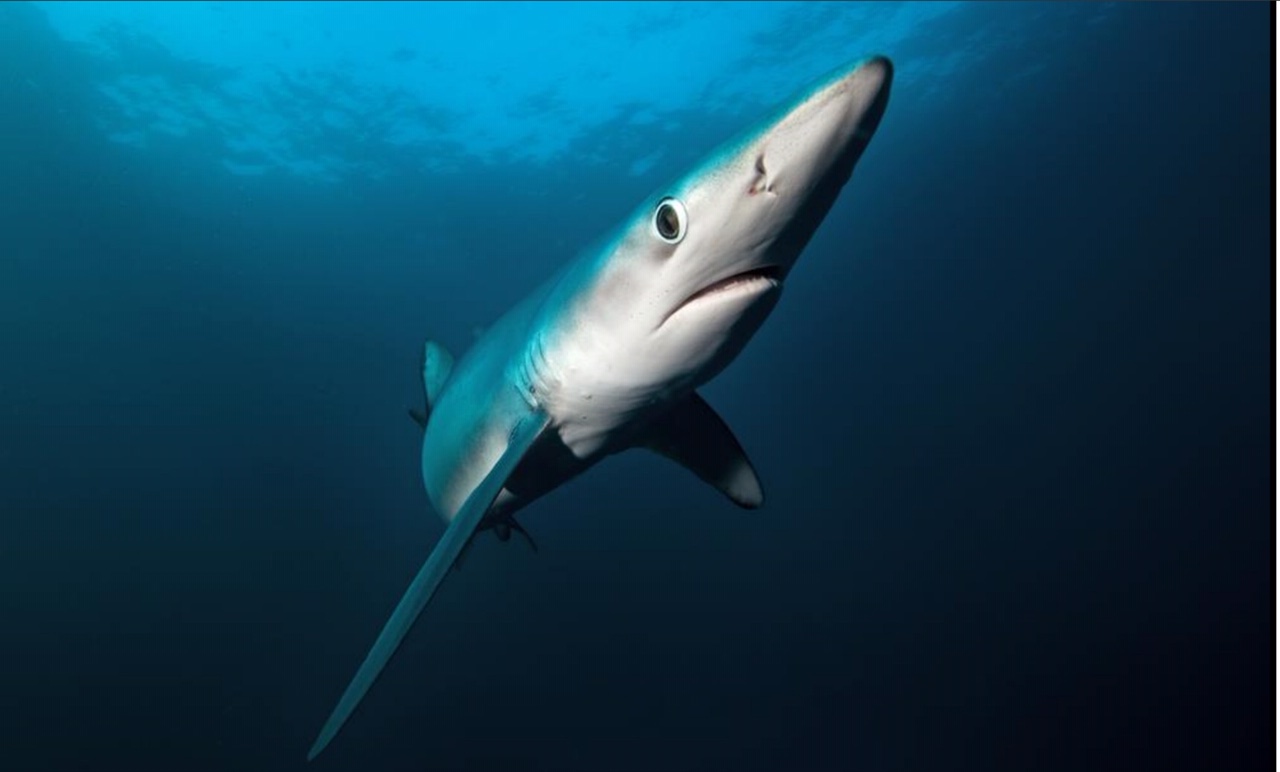 The reach of the Blue Sharks is almost global, only absent from oceans at the upper extremes of latitude. Towards the equator, they search out the cold of the depths (they prefer cooler temperatures of between 12-20 degrees Celsius), to feed on the bizarre denizens of the depths such as various squids, hatchetfish and lanternfish. However, in our waters they are creatures of the light, feeding in the waters above the thermocline, that invisible dividing line that separates the uniform warm waters above from the cool beneath. Five Blue Sharks tracked by satellite archival tags from Plymouth in 2006 rarely dived deeper than 50 feet during daytime, although they did sometimes venture deeper during darkness. Once departing our waters, they reverted to feeding at depth during daylight, only ascending the water column during darkness following the natural rhythms of their prey. However, much as with humans, there is individualism among Blue Sharks and assigning strict generalisms to these slippery beasts can be foolhardy.

Whilst visiting our waters, Blue Sharks seem to feed no better at night than during the day, although, much like my cats, they are highly active at dusk and dawn. Their diet changes too, rarely do they actively feed on squid, but rather opt for the relative ease of capture and high nutritional value provided by small pelagic fish such as herring, pilchard, and mackerel. They will not refuse carrion whether from the discards of trawlers or a whale carcass. Despite this preference for the upper layer of our seas benthic fish, such as whiting make a formidable bait for the species.

Blue Sharks can transform between lethargy and rapidity almost instantaneously although they prefer the former. They are capable of speeds up to 25 mph (some say 60) but cruise at less than a fifth of this value. On calm days they often lounge, almost immobile at the sea surface, setting aside the notion that all sharks need to swim to breathe, as the Blue Shark retained the ancestral ability to pump water over their gills independently of forward motion. 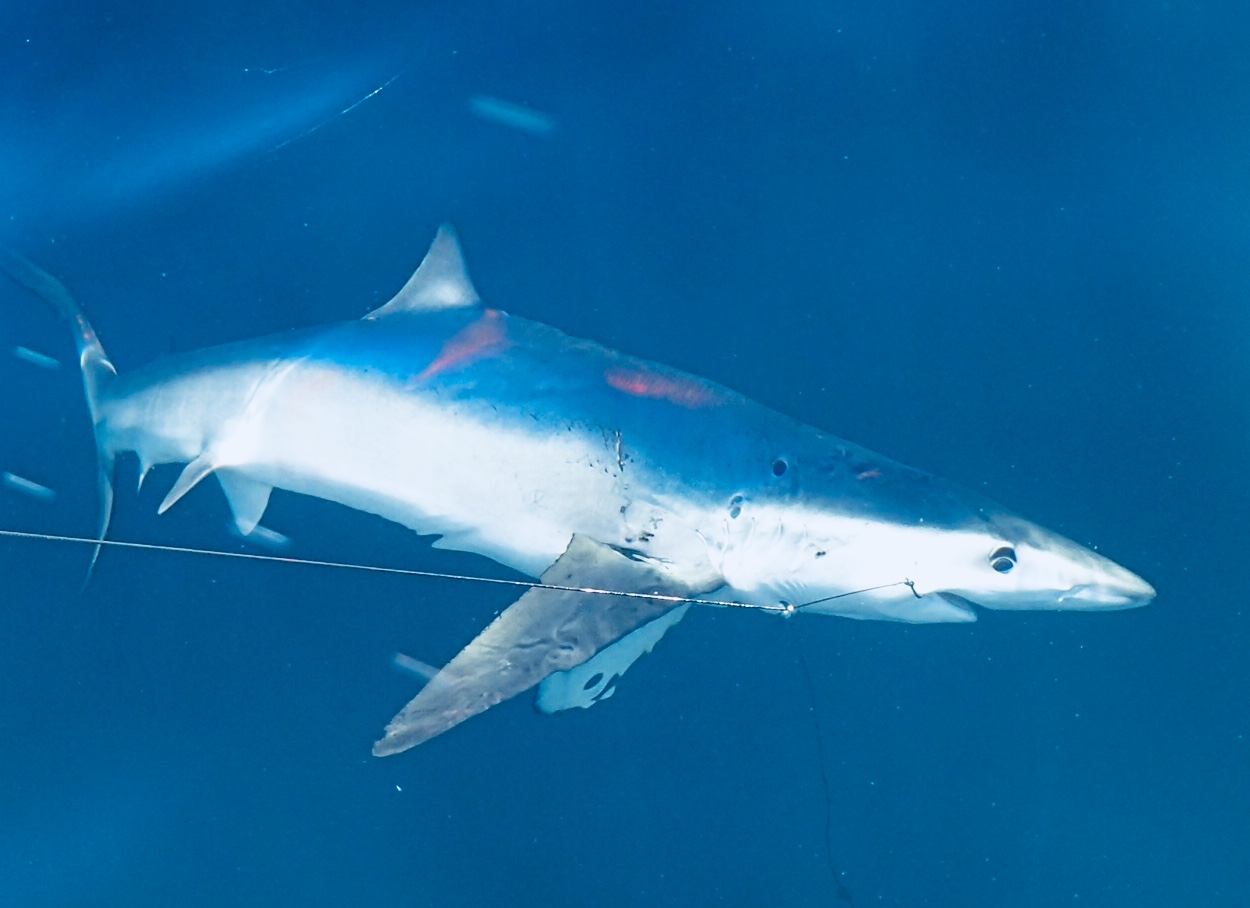 Whilst traversing the vast deserts of the open oceans, Blue Sharks segregate according to both age and gender, the latter being a prudent move given the viscous nature of their courtship. In an evolutionary response to the advances of amorous mates, females have developed thicker skin and a tolerance of lower water temperatures than their male counterparts, allowing both spatial and physical protection for much of the year. Mature fish briefly congregate to mate in the deep ocean far from land, Tagging has revealed that the area north of the Azores, where the divergence of continents fractured the seabed sees large concentrations of mature Blue Sharks during the winter months.

Mating is brief but brutal, and before long before the urge to travel and the females desire for safety segregates the sexes once more. Since the inception of Blue Shark fishing in the UK in the post-war years the dominant gender of sharks in our waters has been female, to the extent that the capture of a male shark was noteworthy. However, in the waters west of the Mid-Atlantic ridge where the Gulf Stream carries waters warmed by the tropical sun northwards, male sharks are ascendant and are common as far north as Nova Scotia during the late summer. In recent years males of all sizes have appeared with increasing regularity in our waters, perhaps influenced by a changing climate or natural cycles. Given the presence of fresh bite marks on female fish, mating of Blue Sharks in our waters is highly probable and the capture of several new born fish suggest that at least some females choose to birth here as well.

We are fortunate that that these sleek indigo travellers choose to make our waters their home during the summer months, despite the vagaries and obstacles of such extensive migrations. Despite continuing commercial exploitation and the worldwide reduction of many shark stocks, the Blue Shark is a conservation success story and the numbers reaching our coasts are likely at a historical high. 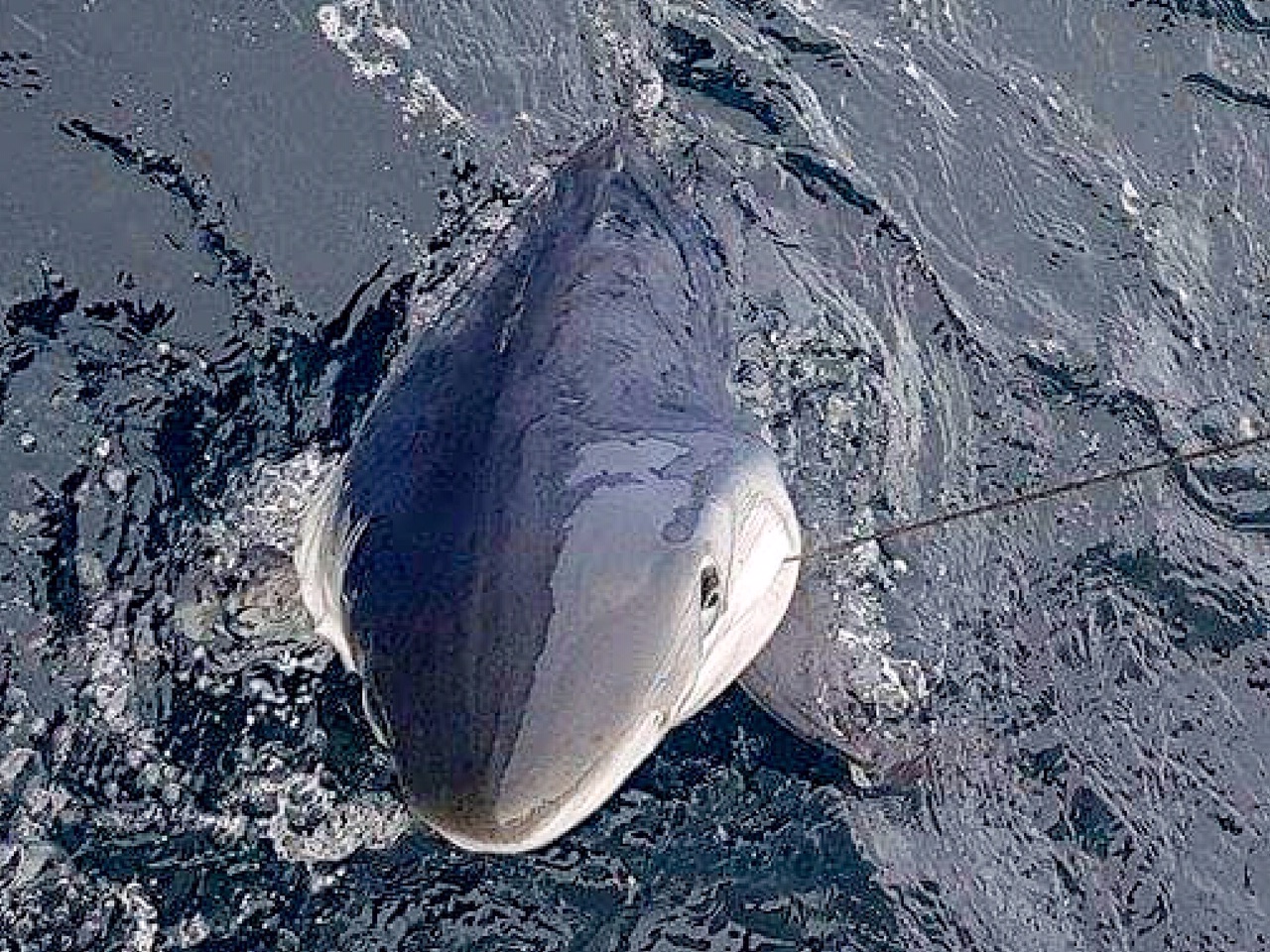 Every year I look forward to the first glimpse of their white belly as they roll near a float, the tip of a fin half sighted in the slick, or the anxious scream of a ratchet as the first Blue Shark of the season, a fish who has crossed oceans to get here, signals its arrival.

SUBSCRIBE
Where are the Mackerel? Fishing forecast and Catch reports for Chesil Beach, July 2020