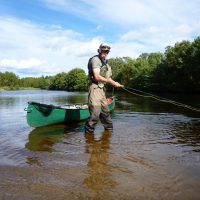 “…. how often do you have a chance to get skunked while casting a fourteen-foot spey rod in the shadow of a castle built two hundred years before the American Revolution?”

You’ll be thinking that I quite like John Gierach. Well, I think I do. I like his writing and his attitude in his writing; and I get the feeling that I’d kinda like to meet the guy and share a beer with him. Although I’m rather afraid we’d discover that we’re both grumpy old buzzards with not very much to say to each other. A bit like going down the pub with your best mate, but without the comforting warmth of familiarity to fill the silence.

But to return to his quote, for me the answer is well, every feckin’ day to be honest. 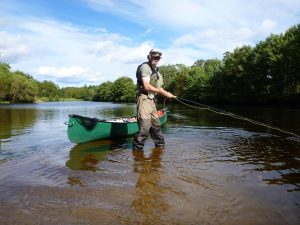 And frankly, after a while it becomes rather tedious getting skunked, eaten half to death by ravenous midges and invariably ending up “drookit”, to use the Scottish term. This last being a rather onomatopoeic description of one’s status after a classic spring or autumn day exposed to the vicissitudes of our local climate. Of course it’s not always as bad as this. The summers can be even worse.

Having said all this, it is actually possible to catch a salmon, once in a while. I know this because I’ve caught one. Just the one, mind. And therein lies the rub. You can wait an awfully long time for a salmon, even if you live on the banks of one of the most hallowed salmon rivers in the world. 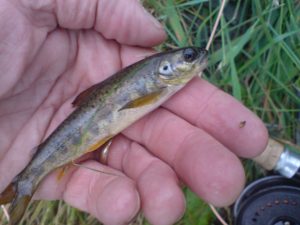 Our local newspaper, which labours under the somewhat grandiose title of the Strathspey & Badenoch Herald, carries a not-so-weekly fishing column which tells you pretty much everything you need to know on this score; provided you know how to read the signs. Firstly, there is very little comment or even any sense of passion from the columnist, and this is your first clue. It’s as if a lifetime of recording, and presumably experiencing, essentially quite mediocre catches has stripped the author of any enthusiasm he may have once held for his subject. That’s assuming that you even manage to spot it due to either its complete absence (a very bad sign), or its brevity; in which case you’d be forgiven for confusing it with the local camanachd or bridge club scores. If you don’t know what camanachd is, by the way, do look it up. It’s far more interesting than the fishing report although maybe not quite as enlightening.

It’s been reduced over the years to a (very short) list of the barest facts and figures:

This in itself is pretty telling, but it’s on the rare occasions that some sort of detail is recorded that you get a real feeling for just how truly depressing this whole salmon fishing business can be. A fairly typical report would read as follows:

Read that again, in case you missed it. Yep, one measly (okay, pretty decent) fish for a whole week of effort. For the entire party!

If you thought that was bad, reading further would be enough for even the most patient fisherman to question the sanity of the enterprise:

“This was X’s first salmon, having been returning to the area for 23 years”

And I can assure you that this is by no means an exaggeration.

However, each to their own, and as John Gierach cheerfully points out, it’s not every day you get to blank in such glorious surroundings, steeped in history. Unless you happen to be a local of course, in which case as I’ve stated earlier, it sucks.

The only decent salmon I’ve ever caught came about by, as I now know it, sheer good fortune and the ignorant bliss of the neophyte. I’d got this classic cane rod, paired up with a nice Youngs Beaudex and an equally classic double taper line. I’d been frequenting a little pool on the Dulnain, not far from home, casting various white concoctions in the hope of fooling a sea-trout. On the evening in question I’d bullied a few parr who should’ve known better (and certainly did afterwards) not much bigger than my fly, and had let my last cast drift on the dangle towards the near bank. Bang! A thumping great weight caused the rod to arch over and tore off upstream. It was a merry tussle, not the least because the fish then decided to return downstream, causing me to have to pass the rod around two intervening bushes. It was all very exciting and, to use a hackneyed phrase, the tackle was tested to its limits. I don’t think the rod ever recovered, to be honest. Anyways, eventually I had banked a beautiful, fresh run fish of around 7 or 8 pounds. Not bad going, especially on antique tackle with a 4lb tippet. As I said, I can’t claim any real expertise on my part; I was convinced I’d landed a sea trout and proudly displayed the photos to anyone and everyone I could accost. 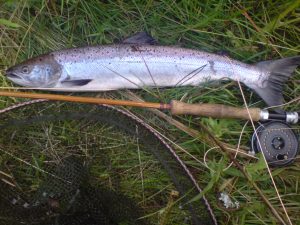 One of my mates finally broke the spell:

I’ve still to hook a sea-trout from the Dulnain, incidentally

At this point you’re probably thinking you’ve done a hell of a lot of reading for just one fish story. Hey! Welcome to the world of the salmon fisher, bozo! You could maybe console yourself with the thought that you’ve invested far less time in reading this than you might have to for a salmon of your own. You might even come to the conclusion that, for all the pomp & mystique that surrounds it, this salmon fishing malarkey isn’t all it’s cracked up to be. Well, that’s not for me to say.

“Never knock another man’s hobbies”, is one of my mottos and, as J.G. suggests, where else can you wet a line…..?

I would suggest Spain, for a start…… 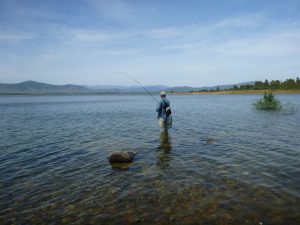 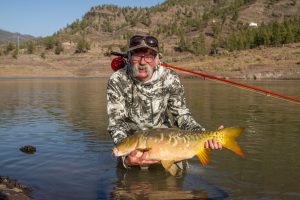 p.s. a friend has suggested that I may have made a typo with regards to the word “carp” in the title….

3 Responses to "Salmon & the Carp Angler"