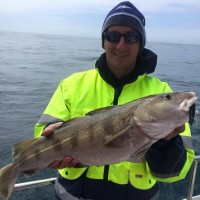 Don’t you just hate it when you have planned to go fishing and something comes up, and you cant go. You just know that your going to miss out on a good trip. That’s exactly what happened to me on Sunday. I was going to join Luke Pettis on his charter boat Snapper out of Weymouth. Unfortunately due to a prior commitment that I had forgot about, I was unable to go, but Luke and his customer ended up have a great day with plenty of Cod coming from the wrecks.

In the end I didn’t even go fishing at all on Sunday, but plenty others did. I know from seeing the reports coming in this morning that there was some decent fish including Rays, Plaice, Dabs and quite a few Smoothound. Due to the water being coloured a number of Bull Huss also came during the day. The Weymouth Angling Society Monthly shore had a good array of species as well, including the Bull Huss and even a Conger, which helped Danny Woodcock to a win. 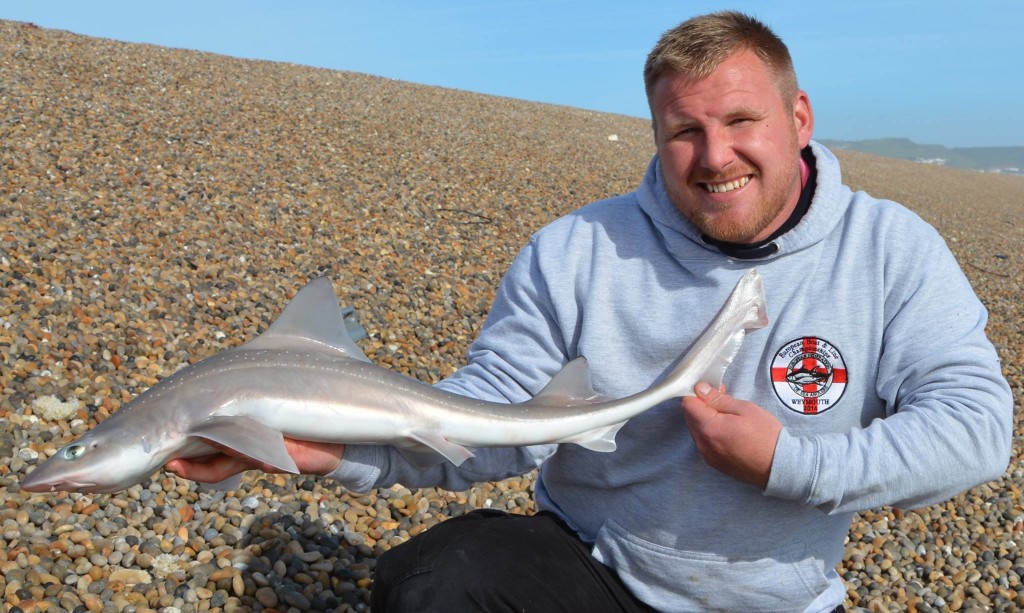 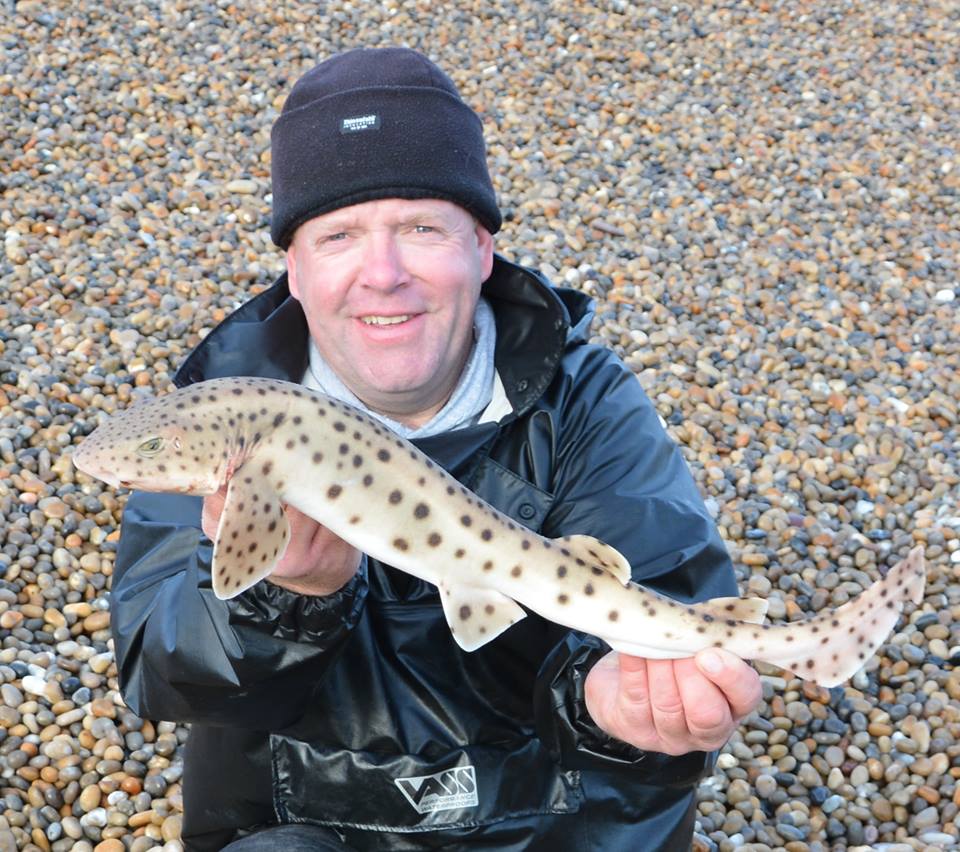 Leo who normally reports on the Poole area, decided to fish Chesil on Saturday, I will let him tell his own story.

Against all my better judgement to fish sandbanks. Me and mate martin decided to fish the portland end of chesil. I was looking to bag a ray and I thought the portland end was a good place to start.
When the weatherman says the 4cast will be blowing westerly 15mph gusting to 25mph why doesn’t he just say constant 25mph like it was. Even sean commented on our mental stability, wanting to fish in those conditions.
The wind was blowing directly in our face. So any ideas of long distance were blown out of the water literally!!

I opted to use a fixed spool rod set up. Normally the most trouble free in windy conditions and give the new reel a test in testing conditions. With the magnets set on 3/4 to slow the spool during casting it performed admirably. Both rods were fished as far as we could cast. Which was the other side of the gutter!
We opted for smaller baits to gain a bit of distance. So we didn’t expect great things given the conditions. Onshore wind and huge surf! On my tripod I had to hang a plastic bag full of pebbles to aid the stability of the rod rest and to stop it falling over.
Within minutes of casting all four rods baited with ragworm and party squid baits. They were nodding out of time with action of the waves. The culprits were small smoothhound not huge but welcome given the conditions. 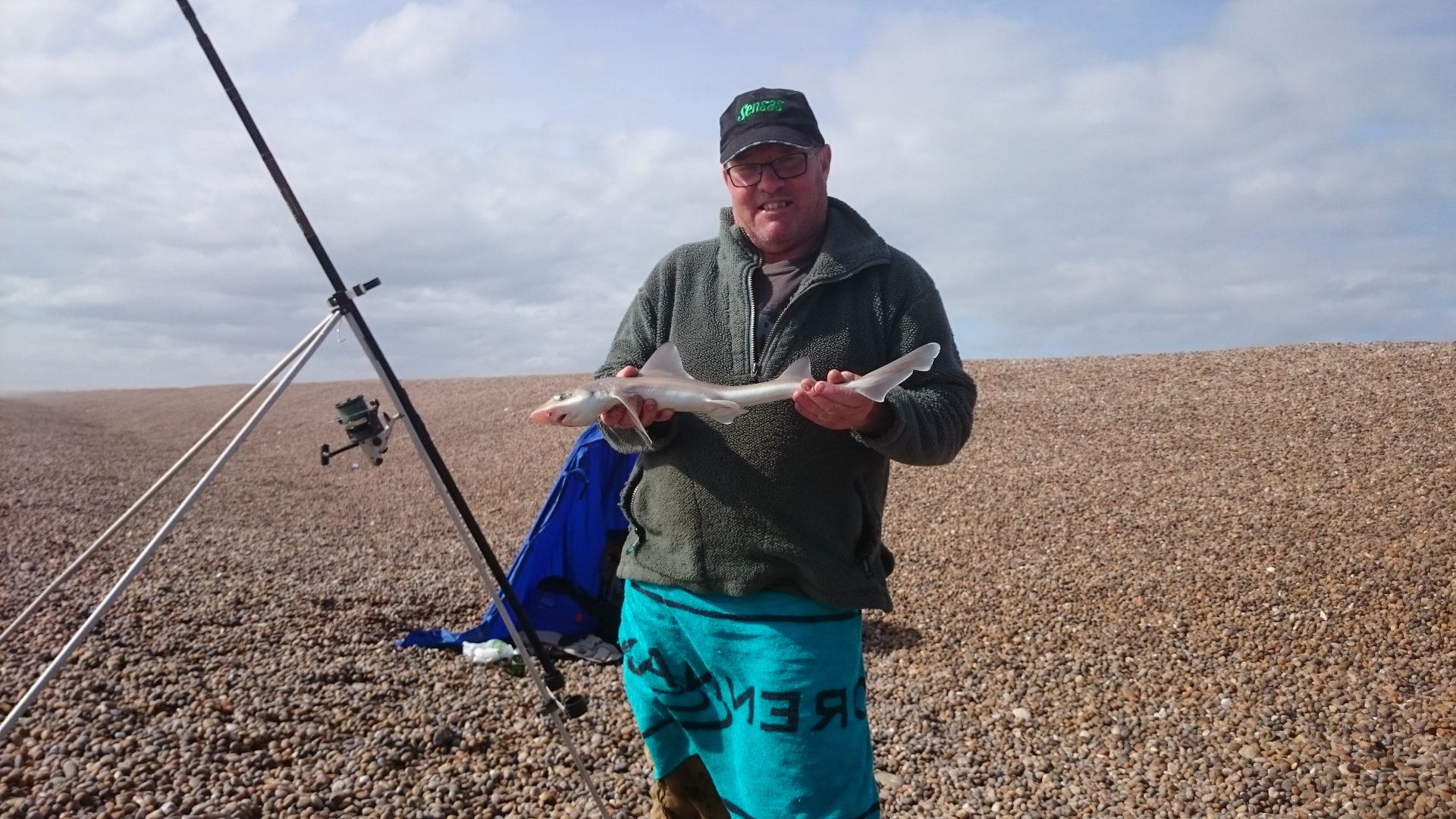 We had brought Mackerel for Ray baits but were reluctant to use it,for fear of unleashing a dogfest! I tried a small fillet and surprisingly the first fish to hit the beach was what looked like a small Bull Huss. Strangely it had all the markings of a Huss but none of the physical characteristics??
We caught several of these but none of any size though. The dogfish seemed to carpet the bottom.
As well as the usual pout on worm after dark. We had a steady stream of fish all afternoon and into darkness.
Granted we never got that Ray, but with a slight change in tactics we ended up with a fairly decent catch of Smoothhound dogs and pout. Even though the weather and venue change threatened to scupper our chances completely.
On a lighter note. Later in the evening. I had a cracking slack line bite on the worm bait!
I reeled like mad to pick up the slack line and lifted into the thump! thump! of a good fish. I loosened off the drag on the Akios and thump! thump! the fish took line with each lunge! It slowly led me down tide and slowly I gained line on it.
As I eased it into the surf my mate carefully walked down to the waters edge to assist landing the monster! I saw the leader knot above a breaking wave and held firm waiting to land it on the next wave!
The mainline suddenly parted like a gunshot and as I fell over I saw a large black bucket upend in the surf with my fluorescent green leader attached to it.
I landed on my backside “fiddlestix” I exclaimed!
After all that I had been playing a bucket for the last 15 minutes. That was when we decided to called it a day and went home!

Chesil Beach forecast: With the water clarity improving there will be plenty of chance to catch Mackerel and Plaice. Medium too small tides should mean that there will be a number of Rays around as there was at the weekend. As the tides increase in size towards the weekend, we should see Bass starting to arrive.

Expect lots of Dogfish and Pout on night tides

Portland: The water clarity is not great at the moment, and that will affect the Pollock fishing. I hope that improves over the next day or so. I am out to try and get some Wrasse on lures this week. If you want to target them on bait you should be able to catch a few quite easily. I have heard of Plaice being caught alongside Wrasse at Church Ope Cove. The main problem there is finding the sand patches.

Portland Harbour: It will start to pick up for Bass fishing in the harbour, especially towards the weekend. I have spotted a lot of Mullet around Castletown and near the Castle Cove sailing club.

Weymouth Bay: Tonight’s Weymouth Angling Society  junior night at the Stone Pier. Anything can turn up during these short competitions. Both piers continually produce lots of different species.