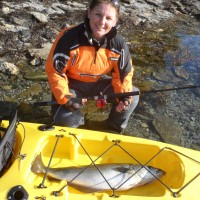 You might think that my first fishing report would be on or around Northumberland, but no I’ve decided on Norway, we’ve all seen some cracking monsters being hauled in on the boaand even the shore fishing is producing some belters. So here’s my Norwegian tale, hope you enjoy.

Ok here we go… After good flights from Newcastle to Amsterdam then on up to Norway, we were picked up by Phil Dale at the rail station, a quick stop at the shop for milk and bread, we arrived at the place that would be home for next 4 days… absolutely stunning, the apartment was spot on, with a balcony over looking the marina and fjord, with the bridge just a bit further along. So after a quick cuppa we jumped into dry suits and were on the water within an hour of arriving.

We Headed up to fish under bridge, and more or less straightaway I  had the first fish, a nice Pollock of about 4 Lb , good start I thought, but atlas that was the only one that evening, never mind we thought better luck tomorrow. Wednesday morning saw perfect weather for kayak fishing, warm, still, and quiet. We decided to try opposite direction today to the bridge, after drifting on the tide for a few hours and not as much as a sniff of a fish only Peter getting a  couple of small codling, we headed off over the other side, starting at the bridge leg and getting a nice slow drift. This was mid afternoon and as we were fishing for our tea, things were  not looking good and the thought of Knorrs Pasta n Sauce  was looming as the only alternative I was desperate. Just then after noticing sea weed on my line i started winding in fast to clear it, when i got a good take, in came a lovely 5 lb Pollock……whoop whoop were eating tonight….

….only to drop the bloody thing into my lap, it taking a good bounce and ploop strait back into the drink….. ???….I”ll leave it up to your imagination to how much stick i got after that one….People that know me will know this is a bit of a thing I have going dropping fish, this wasn’t my first and hell it wont be my last.

Before we left for Norway we had checked out the area on the Navionics charts and had found some areas that looked like good potential marks. So after I had recovered from the embarrassment of dropping our tea, we paddled back over to the south side bank. Using the small fishfinders that had been supplied by Phil for depth and ground definition we found what we had been looking for.

Peter and I had decided to have another hour as the tide was on the flood causing a fair race. Thinking about how I had been reeling in my gear fast when I had the last fish, I decided to try this approach again, so after dropping my gear and hitting bottom, I would then reel up fast for about 20 turns then drop again, then on about the 2nd drop all i can say it was like a steam train hit my lure, reel screaming and line being stripped off she went, I would just get back 50 yards when off she would go again, thank god this was on what I think of as my heavy rod/reel, Kenzaki Braided Special 12/20lb with a Penn 310Gti, after a good 20 minutes of  huffing and puffing, swearing and been dragged all over , in came a fantastic sized Pollock,  …weighed in at 16 Lb …..I have never had a take like it, and with being in 40 meters of water this added to the workout. If you ever need proof that sonar charts work then this did it for me.

One hell of a jump from previous PB of 5 Lb, haha. Needless to say we ate well that night. Staying in the area of this mark we went on to have some great fun with fair sized Coal Fish, these ranged from 5lb to 10 lb.

Thursday saw thick fog but we were still able to get out, fished up to lunch time when fog lifted, that’s when Peter and I found a nice little mark giving coalies around 6/8 Lb, I don’t know if you have ever had a tussle with an 8 Lb coalie that’s down at 40 meters on light gear, I thought it was going to rip my arm off and hit me with the soggy end. That was it I was hooked and a member of the Coal Fish fan club.

10 lb Cod made an appearance.

Peter and I had decided we fancied a try in the Straumen fjord that night,

this is where there is one hell of a race/ current floods in at high tide, Phil dropped us off and arranged a pick up at dark. a few nice smaller cod but apparently this fjord is stuffed come spring with double figure cod as the spawn here.

Friday came and again loaded the yaks up on trailer for Phil to drop us all of 5/6 miles up the Fjord with the intention on drifting down with the tide, all started really well till the wind got up and was holding us in one place, a choppy paddle across to other side give us a little shelter and a nice drift,

but sadly only small fish to be had, really hard going but hey ho what the hell the beauty of the place made life good anyway. Back down at my little gold mine i had a bit of a play for the coalies, but even these were in short supply today, as only picking up 1 or 2, still good fun.

Decided to call an end to our trip and head back in when on the very last drop i hooked into something that felt like i was snarled up , but there was some give, i started to reel in, still no hard fight, just the occasional pull back down, I shouted on Peter as i didn’t have a clue what was going to pop its head over the side of the yak, the thought of Wolf Fish didn’t improve my mood.

after a really soft fight, up it came, 12 and a half  ling

I had decided when we got there that i’d only target fish that I could catch and release and knowing Ling don’t go back well I had stayed away from the main Ling marks that Phil said he could put us on, which had some huge fish on them, so bringing this fish up was a bit of a bitter sweet moment for me, yes it was a lovely big fish and it give me my hat trick of double figure fish, but at this fishes expense, so  it was quickly dispatched and went onto fill a couple of freezers back on land so not so bad.

Fishing was hard going on this trip, but once I had worked out that these fish like a fast chase of the the lure. We also learnt that we had out fished the boats, as these were struggling with anything of good size, plenty small stuff but we had landed the only double figure fish all week, on light gear as well.
This place is absolutely stunning location,

I had thought before we got there that it was going to be a case that fish would be jumping into my kayak, but no you have to find them, then working out what there being taken on, I  learnt loads on this trip. Norway isn’t easy fishing, as i had thought, but there are some huge fish if you put the work in to find them, we only see the photos of the odd few big fish, but wow what a photo to show the guy’s in the pub.

One Response to "Kayak fishing in Norway"