Fishing Tails > All Articles > Reports > Chesil Beach > Just one half decent fish is all it takes, to keep you hooked.
Finally a chance to get out fishing on Sunday Am I the only one fishing Chesil Beach? 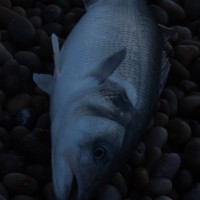 Just one half decent fish is all it takes, to keep you hooked.

It is all about that one fish, that keeps you going out time and time again. I am sure I  am not the only one who has been desperate to get a decent fish to get this  year started off. The weather has been terrible, and on the few occasions that I have been able to get out, there just seems to be no decent fish around. I have been able to take some heart in the fact that it has been pretty much the same all along the south coast. I have read with envy, a rare few fishing reports of some lucky anglers that have been able to get a decent fish. But it is those reports that keeps us going out, even when you know that there is very little chance you will be that lucky angler.

For me yesterday was one of those days. I had been watching the weather all week and I spotted a potential break in the weather. I knew it would be a tight call, as experience has taught me that Chesil can calm down fairly quickly, even from the huge storms that we have had. if the wind drops quickly enough and changes direction. As you can see from the picture below I got that part right.

The much bigger problem was that Chesil has been fishing pretty poorly for the past month or so. This is the normal pattern for January and February, yet we still hope that the odd lunker will be out there with your name on it. Lets not dwell on the negatives, but look to the positives. By midday I am on the beach with my friend and fellow fishing guide Paul. We have the whole beach to ourselves, for as far as we can see. We have managed to get good fresh bait, in the form of live Peeler Crab and Lugworm. Paul has brought some frozen mackerel with him as well. Why were we the only ones to have bought bait from the tackle shop, and be on the beach by ourselves?

After a first cast Dogfish for Paul, and nothing else for three hours for either of us, we know why we are the only ones on the beach. Everyone but us, has stayed at home knowing that it is a waste of time at this time of year. Myself and Paul look at the conditions and the colour of the water. We tell each other that we know there wont be many fish around today; not even many Pout or Dogfish. But we know that there will almost certainly be at least one lone half decent fish out there, and as we are the only ones with baits in the water on the beach, the odds, slim as they may be, are in our favour. As sunset approaches we keep telling ourselves we will surely be right! Won’t we? 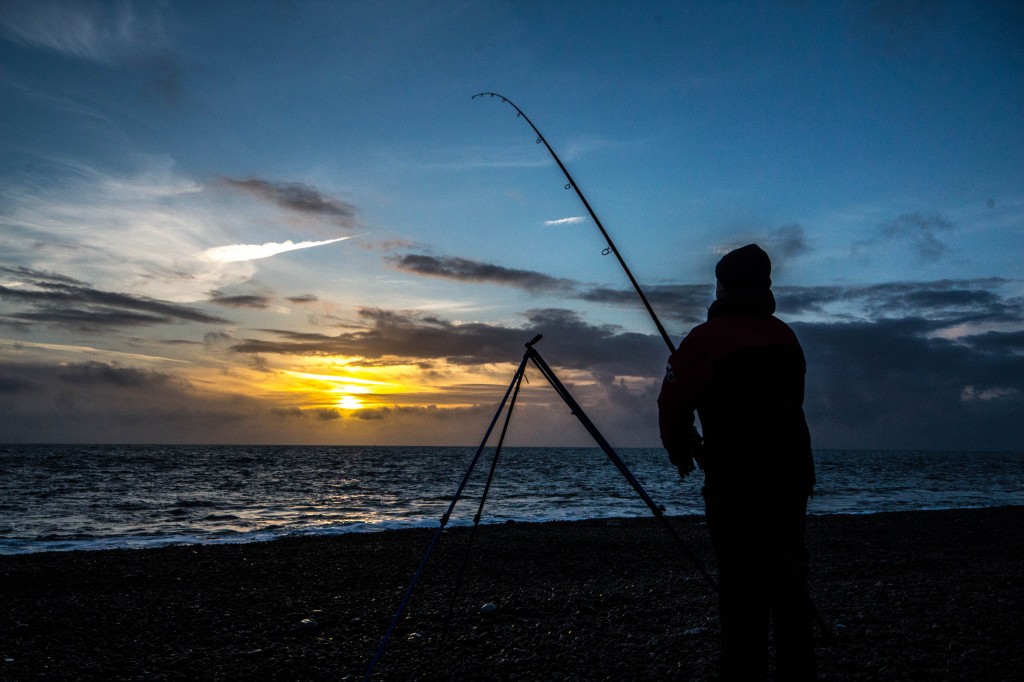 As once gain despair starts to settle in and I tell Paul, “I wont be fishing again until the Plaice start to appear next month”, that I see my rod tip drop back from its tightly bent down position, to ramrod straight. The tell tale of a classic drop back bite. I rush forward, grab the rod, wind in the slack and lift into the weight of a solid fish at last. I can tell straight away that it is no monster, but at least it is no Pout either.

As I bring the fish closer to shore, I make sure my drag is set right. It kicks hard as it gets closer, and with the swell pulling back, I feel the line coming off my reel under the pressure of the clutch. As it gets closer and I use the waves to my advantage, I look into the water expecting to see my first Codling of the year, but that is not what I see. Instead my rod thumps and the reel releases more line, as I see a large tail and silver flank roll and dive in the surf. It is a Bass, and with aid of the incoming surf and a final pull, I beach my only fish of the day. 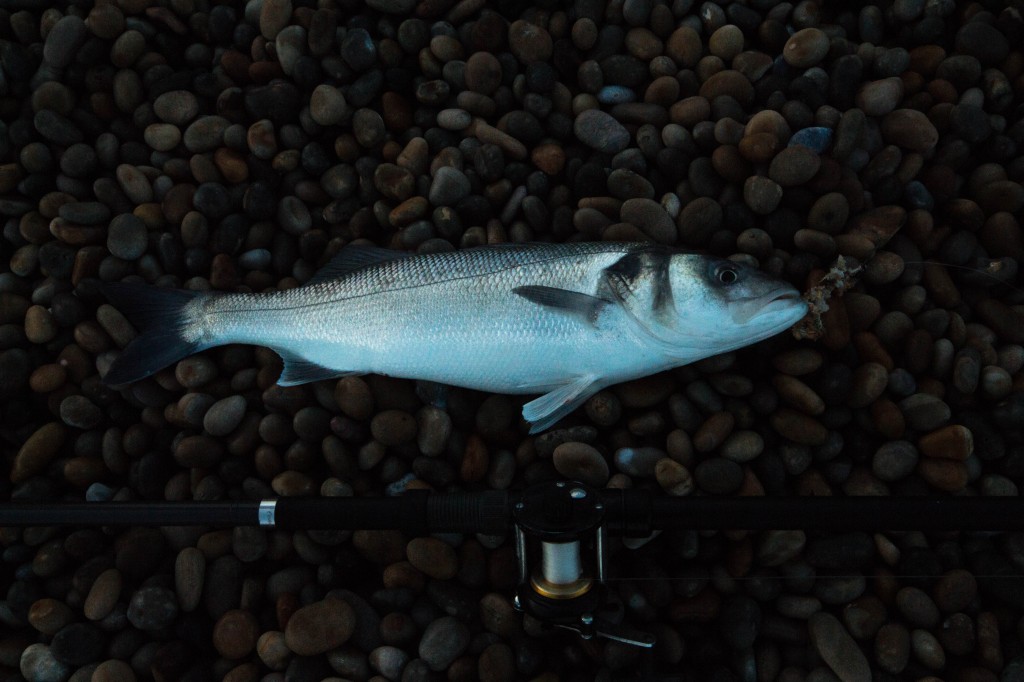 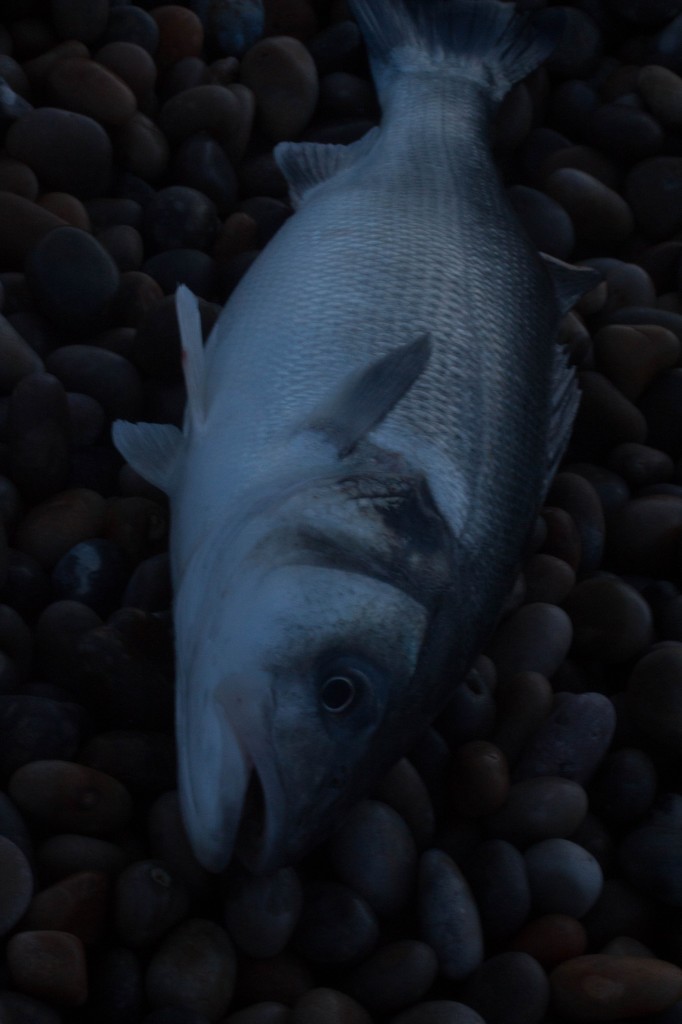 At four and a half pound, it is no monster by any stretch of the imagination, but given the recent conditions and the lack of any decent fish, I was delighted that I had finally managed something other than a Pout, Dogfish or small Bull Huss  for the first time in three trips. 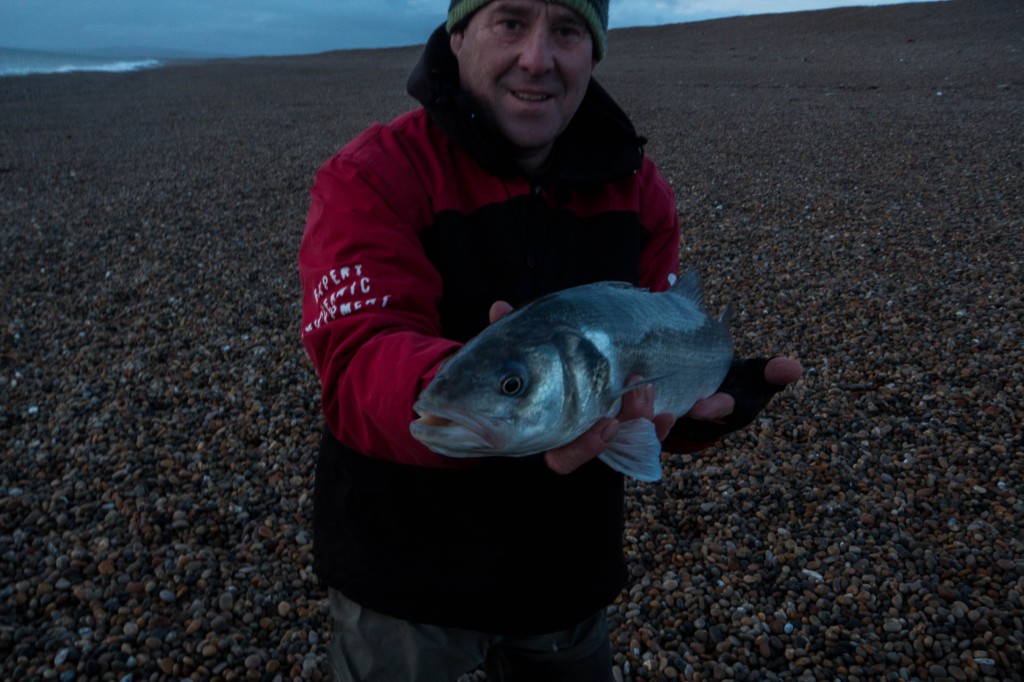 This is what fishing is all about. Getting out there when we can, in the vain hope that we can catch a fish that we will remember long enough to get us through the next barren spell.

Spring is just around the corner, the good times are but a few weeks away. Get out there and show me you can do far better than I did yesterday. Don’t forget to send me the pictures, so I can enter them for fish of the month.

SUBSCRIBE
Finally a chance to get out fishing on Sunday Am I the only one fishing Chesil Beach?

One Response to "Just one half decent fish is all it takes, to keep you hooked."