Fishing Tails > All Articles > Reports > Chesil Beach > It is so good to get out and fish
The terror of the drop-off: giant dogtooth in Tanzania Barbless Bass FIshing 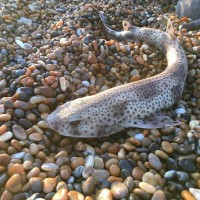 It is so good to get out and fish

I was so pleased to be able to get out fishing on Tuesday. I was beginning to think that I wouldn’t get out again this winter, but there was a break in the weather, that actually happened as it was forecast. Just like the weather I was pretty much bang on with my fishing forecast this week. 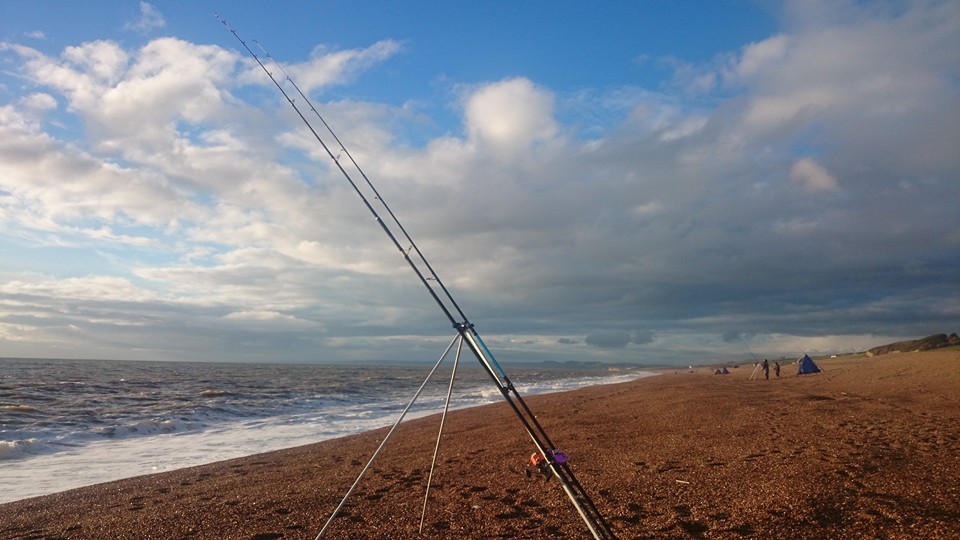 I decided that there wasn’t much point in targeting Cod as your chance of getting one at this time of year from Chesil, is pretty slim. I would go as far as to say you have a better chance of catching a Cod in early September than in January on Chesil. My target was Conger, Whiting and Bull Huss. If a large Cod swam by then it wouldn’t turn it’s nose up at my Conger bait. I baited up with a whole Squid cast out as far as I could, Which was not very far, given that the wind was still fairly strong from the SW. I started to set up my second rod to use as a Whiting rod, set up with a 3 hook flapper. It didn’t take long for the first bite to come, as I had only just put the rod and reel together.; a classic slack liner. As I struck into the fish it had a bit of weight to it but not loads. At the back on my mind I was thinking that maybe it might just be a Cod. Alas it was not to be, but I wasn’t disappointed as I landed my target species of a Conger, all be it a small one. 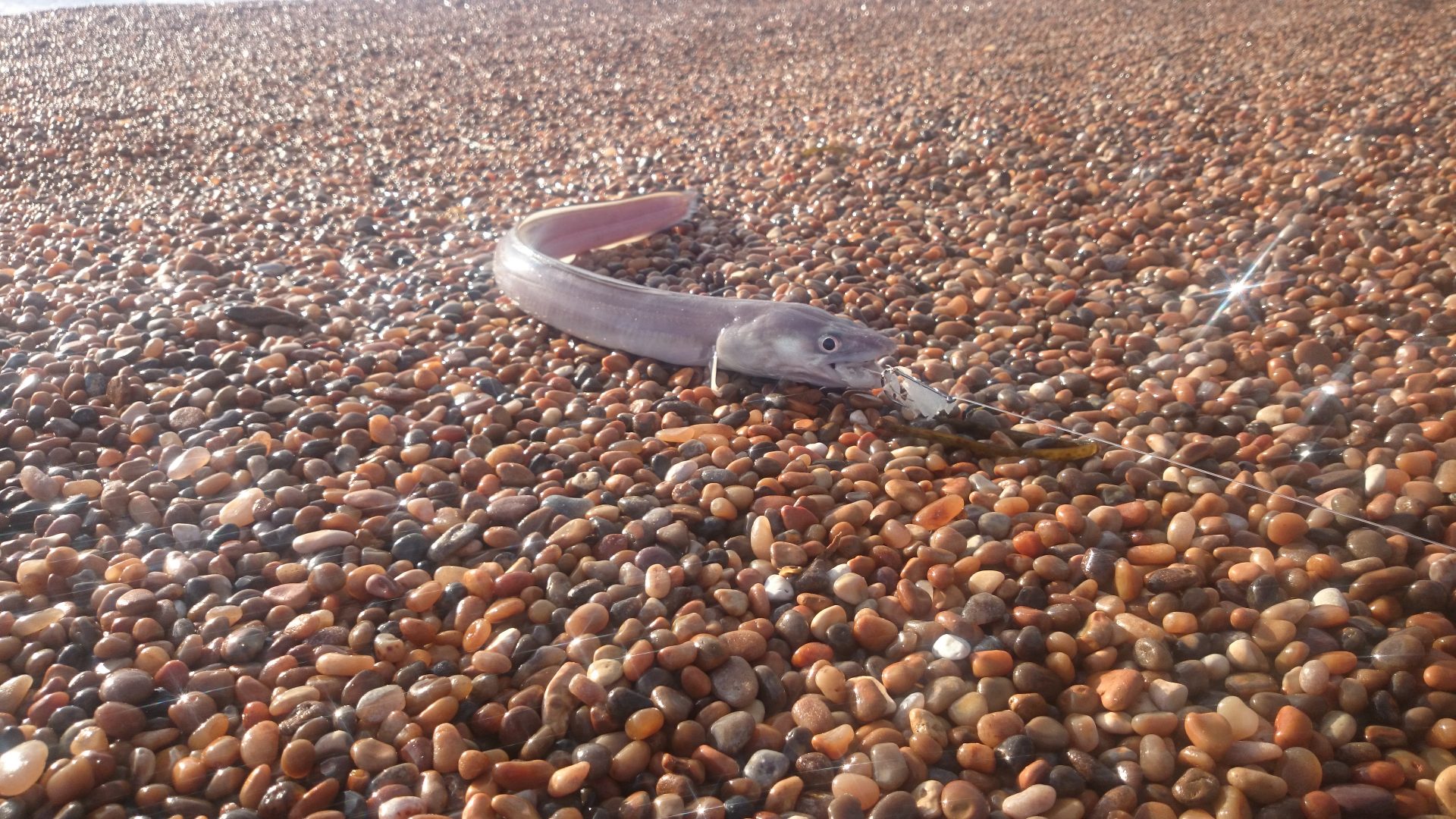 Next up was a Whiting then a small Bull Huss. I don’t normally catch many Bull Huss from Chesil, but at this time of year, especially if the water has been coloured for a while, we do get a few. I see from reading other reports that there was quite a few caught this week. A lot of people have difficulty in identifying Bull Huss and Dogfish, especially when they are small. The easiest way to tell is by the fight. A Dogfish will just hang on to your bait and come in like a carrier bag, whilst even a small Bull Huss like this one, just wants to fight all the way in. I would love to catch a large one from the shore this year. 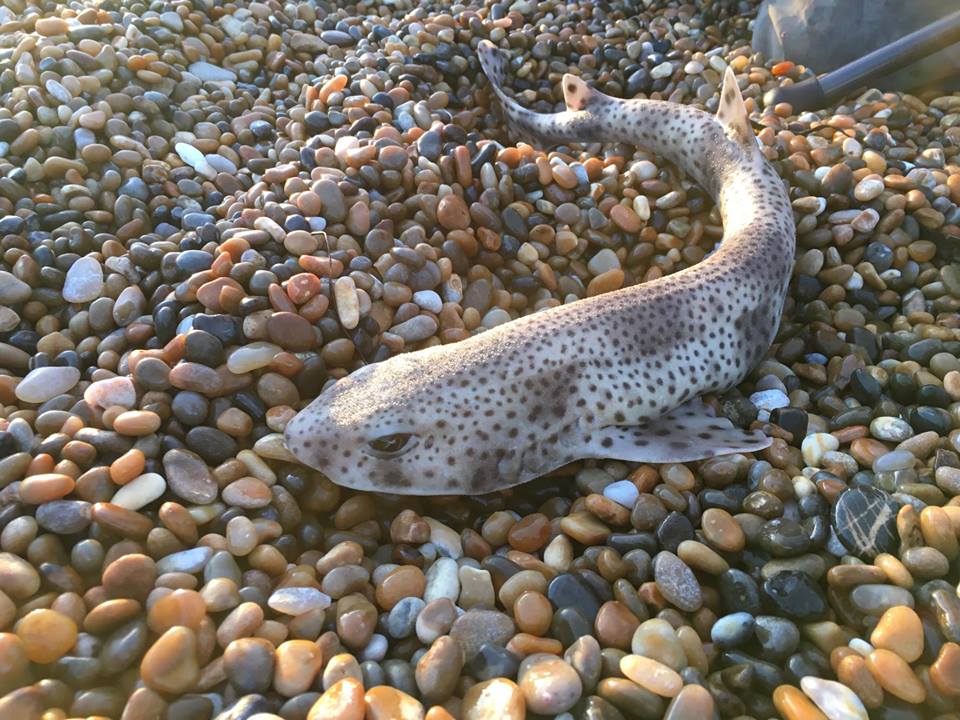 The session ended with a few Dogfish, lots of Whiting of which some were a decent size and another couple of strap Conger and Bull Huss. We didn’t see a single Codling caught and I have only heard of two from all along the beach. It certainly beats being stuck indoors.

Reports coming from other marks around the South Coast suggest that you are better off staying away from Chesil and targeting them. Reports from Paul Gordon in his latest Plymouth Reports suggest some great sport to be had from the South West. Paul will be reporting for us on a regular basis from now on and he is available for guiding in the Plymouth and Devon area. Another of our guides and writers, Leo Toms who covers the Poole area reports that the Flounder and Bass fishing have really moved up a gear. The forecast drop in temperature over the next couple of weeks will be even better for the Flounder fishing.

We are hearing that the fishing in the Bristol Channel is very good at the moment. We are very keen to bring on a writer for the Bristol Channel and the West country. If you are interested in providing reports for us please contact me via email at  sean@fishingtails.co.uk

We had a good response to my comments on cooking Flounder earlier in the week, but so far no one has come up with a recipe. We would love to see some from you budding Jamie Oliver’s out there.

Chesil Beach forecast: The wind is forecast to be up and down for the weekend, with the beach looking unfishable for Saturday. Even in Sunday it will be hard work to get out past the surf and not have your gear buried under the shingle. My advice would be to stay clear of Chesil unless you are a decent caster. Expect similar species to my trip out mid week, with Whiting and Dogfish making up most of the catches.

Portland: The Bull Huss on Chesil may be small, but if you are looking for some larger ones, then Portland is a good option. I would choose to fish the East side to get shelter from the wind and to be able to choose a ledge that you can safely cast to the water from. There are a number of such ledges around Chine, which can be accessed from the road leading down to Portland Bill. If you have a fear of heights then stay away, but if you feel like being brave you can have some great sport. Large Squid of Mackerel baits cast out as far as you can, will get you past the rocks and out to the fish. Don’t be surprised if you hook a ray. You will need heavy tackle to land them.

Portland Harbour: The usual Flounder and small Bass can be expected from the harbour. You will be able to find shelter at marks such as Sandsfoot Sailing Club along the Rodwell Trail.

Weymouth Bay: Flounder and Whiting will make up the majority of fish from the Harbour area, but if you head further round the bay towards Bowleaze Cove, you should find Dabs and Bass as well. There have been several reports of Small Eyed Rays being caught along Preston and towards Bowleaze.

SUBSCRIBE
The terror of the drop-off: giant dogtooth in Tanzania Barbless Bass FIshing