Fishing Tails > All Articles > Reports > Chesil Beach > Huge Chesil Cod
When will Chesil be fishable? Will the weather break? 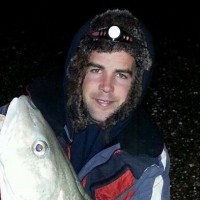 What an amazing day Saturday was for Cod fishing on Chesil Beach. Not only did it produce lots of fish, it threw up at least one big Cod. Darren Mills traveled to Chesil for the first time and what a day he had. As well as some decent Conger and a load of Whiting he managed a Cod of 18lb 14oz. Thanks to Ritchie Payne, who runs the Facebook page Mad Hatters Shore and Boat Fishing South Coast, who allowed me to use the picture. 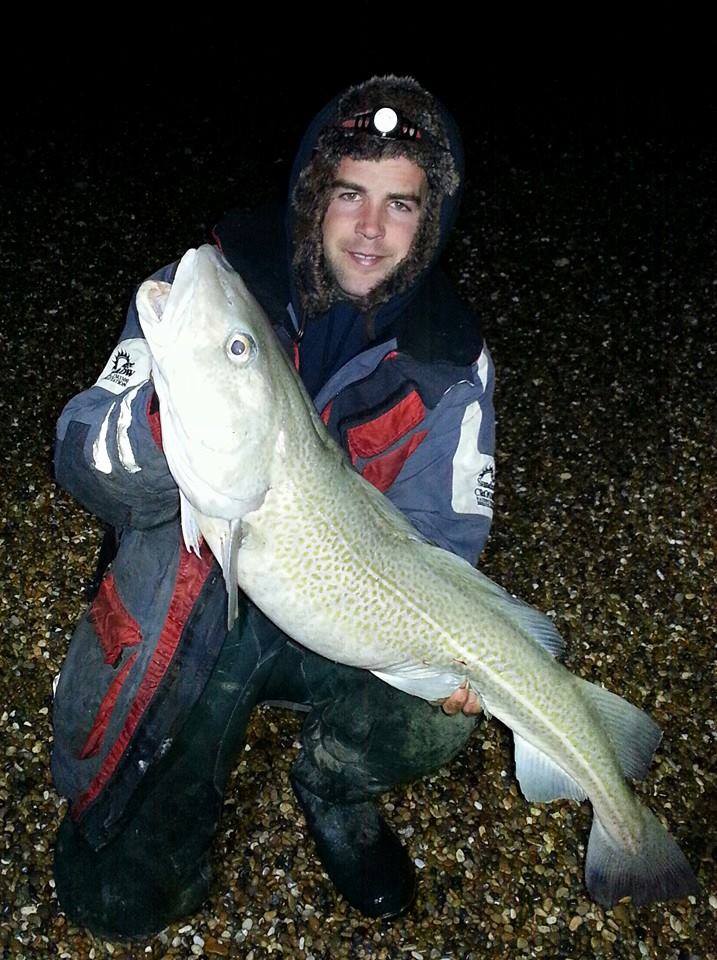 I had every intention of getting out on Saturday, but an invitation to go shooting, forced me into what I now realise was the wrong decision. I had a call from my mate Paul, whom I regularly fish with. He told me he had managed 9 by 11am. When I went to see him at 4pm, he was just leaving and had managed 25 Codling, a few Pout and Whiting and a large Smoothound.

Chesil Beach forecast: It is going to be a yo-yo week for wind, with the first couple of days being ok then Wednesday and Thursday seeing Chesil unfishable. But come Friday, it could well be another Cod fest. Whiting will be a main easy target fish, but there is still the chance of a good Smoothound and Bass.

Portland: Some nice Bull Huss and Conger have been caught from the East side of Portland and the coloured water that comes with the high winds, makes for ideal conditions.

When the swell is not too bad there is some good Wrasse fishing still to be had. The Pollock fishing should be good at the moment as well.

Portland Harbour: One or two small Bass have been caught on lures from Ferrybridge, and you can always try for a Flounder just about anywhere in the harbour.

Weymouth Bay: Both piers are producing some small Pollock and lots of small Whiting. Plenty of Squid have been caught over the past week. Both from the pier and on boats just outside the harbour entrance. Dusk and darkness has been the best time for the squid. 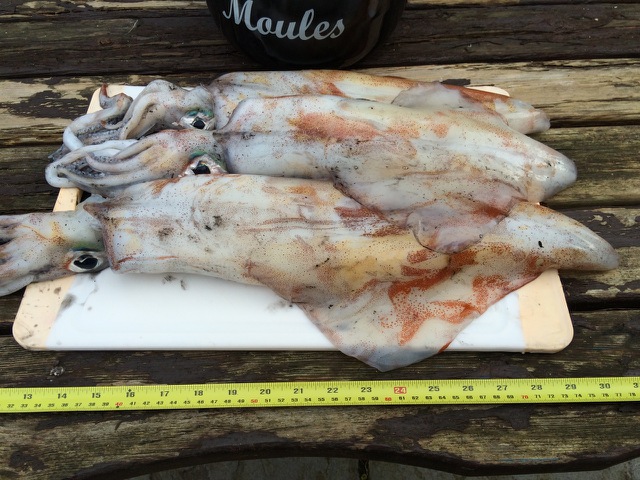 Once again large numbers of flounders have been caught in the harbour. The flounder league on Wednesday night saw nearly 100 fish landed. A good number when you consider only 50 anglers took part.
Interestingly it wasn’t a case of two fish per person. But bags of 6 or 7 person while others blanked.
I fished myself yesterday at Lake pier beach and but for one minute bass I blanked. It would seem the bigger catches came last weekend and in the week suggesting the bigger tides over the last set of springs had the edge over the best catches.
The size of fish was a standard 1lb to 2lb, which means that big one is still out there. 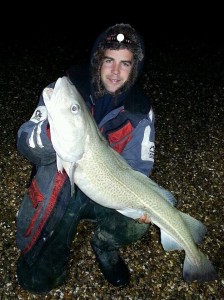 SUBSCRIBE
When will Chesil be fishable? Will the weather break?