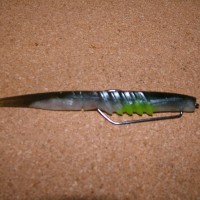 How to rig a lure with a weedless hook

I will be totally honest here and say that most of this article is not my own work. I was about to do a post on rigging weedless lures when I noticed that Steve Butler, a fellow Scotsman and friend of mine now living in Cornwall had created just what I needed. So with his kind permission I have copied most of his work. I hope to do a lot more work with Steve this year, and with a bit of luck I can persuade him to start writing some regular reports and forecasts for lure fishing in Cornwall.

Rigging a weedless hook has to be consider as one of the main basic building blocks in soft plastic (SP) lure fishing. I believe that 70% of your SP fishing will be done weedless.  When we start to look at different methods of fishing SP’s, such as Texas and Carolina styles, then you will need to know how to rig a weedless lure.

The best way I found to start, was to place the hook alongside the SP to see where it’s going to sit.
You can have the eye of the hook and knot just outside the lure or hide it inside by pushing the hook point in a bit further, I chop and change depending on lure/hook and where I’m fishing. Hook choice is very much dependant on the type and size of the lure you choose.
In the following pictures I  have shown it with eye outside and no line attached to make it simple. In the early days you may want to mark the lure with a pen to point out exactly where the in and out points of the hook will be.  As you become more familiar with rigging the lure weedless it will be almost second nature where to come in and out of the lure.

One of the most basic mistakes that novices make when rigging lures  that have a flat surface, such as  Xlayers and Slug-Go’s, is to mount the lure upside down. The point of the hook should sit flush with the flat surface. The same goes for stick worms with the slot cut for the hook to sit in.
Start by pushing the hook point in the required length so it looks like this.

Next slide the lure up round to the right angle bend and as it comes round the bend gently twist it through 180 and it should sit like this.

The final step is to pick the lure up and keep your thumb where you want the hook point to go straight through the lure, just bend the lure back and try to get it as central as possible, it should look like this. Paddle Tails can be rigged in a similar way.

I know a picture paints a thousand words, but hopefully a video will paint a million. I will try and add some video content to add to this to show how it all comes together.