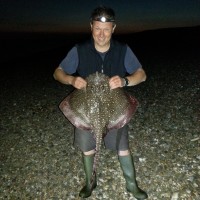 I am hearing that loads of Gurnard are being caught from the Weymouth and Portland end of Chesil, as well as a good few Bream. This is pretty much what we would expect at this time of year. What I didn’t expect was reports of Cod from the same marks. I love the summer as you never know what fish to expect next. I was sent a picture by Shane Hargrave, who was fishing with his girlfriend Alison Robbins on Weymouth Stone pier. She was using Sabiki feathers and catching Pollock when she caught what Shane’s thought was a Herring. I believe that it is a Sand Smelt, which is one species that has eluded me even on LRF gear. 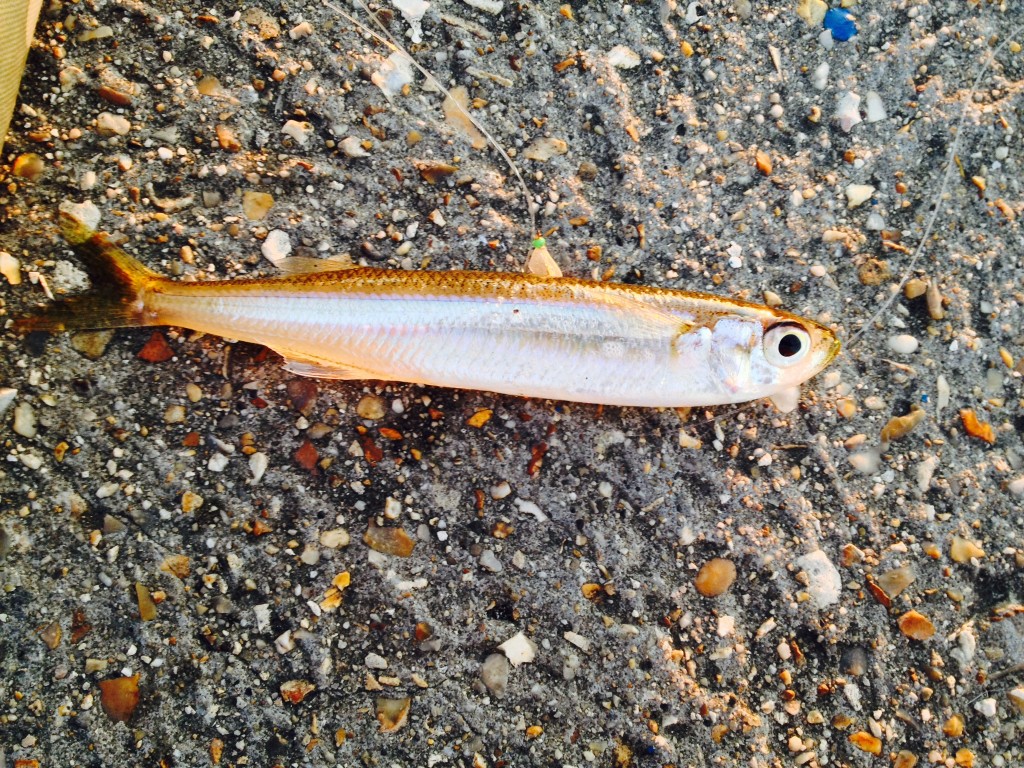 It looks like we have another contender for fish of the month. Weyrad Angling Club memeber, Kevin Turner set a new club record whilst fishing Chesil last Friday evening. He was targeting Bass 10yds out when he hooked and landed this 155% specimen Thornback Ray on Cuttlefish tentacles. The fish weighed 12lb 7oz and was returned alive after weighing. 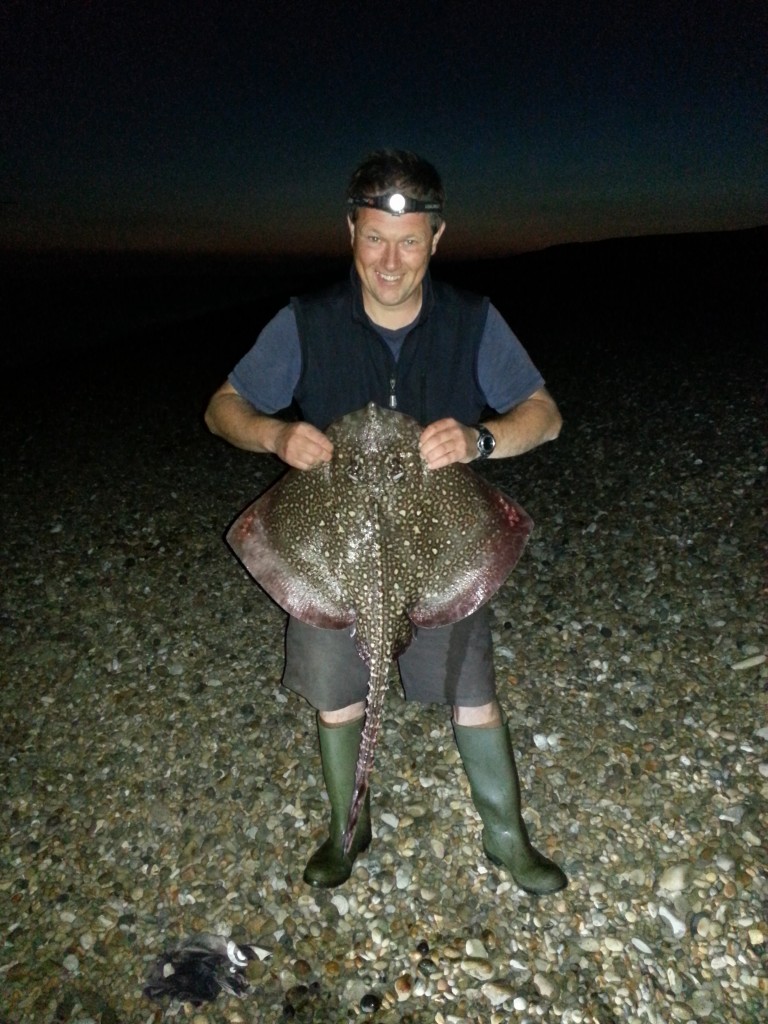 Be careful if you go fishing this weekend, as there are thunderstorms forecast. Do not fish during a thunderstorm. If you get caught out the best idea is to leave and take shelter in your car if you can. If thats not possible then place your rod on the ground away from you, unfortunately carbon rods act as great lightening conductors.

Chesil Beach: Calm with almost clear water, there is a slight milky tinge to it.

Chesil Beach forecast: The possibility of catching lots of different species is very high at the moment. Ray’s Smoothound, Bream, Gurnard, Mackerel, Garfish and even Cod are all on the cards. If you head to the Western end of the beach towards West Bexington, then you increase your chance of getting a Plaice or a Dab. Night tides will produce Dogfish and Pout, with a good chance of a Bass close in.

Portland: After posting about Wrasse on soft plastics, I was contacted by John Cranny, who has fished on Portland for more than 30 years. He sent me a couple of pictures of Wrasse that he caught recently. One on a Redgill and the larger of a Fiiish Black Minnow 120. I don’t think there is a more exciting way of catching Wrasse than on lures. 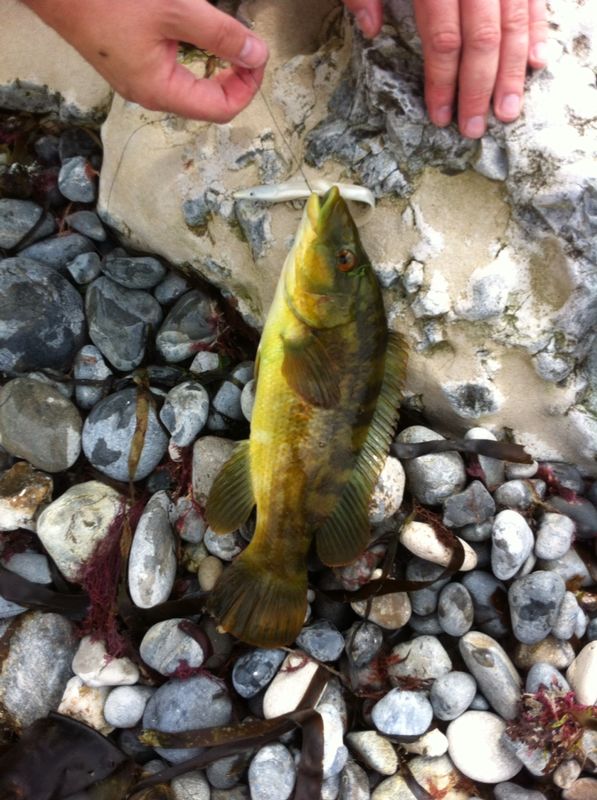 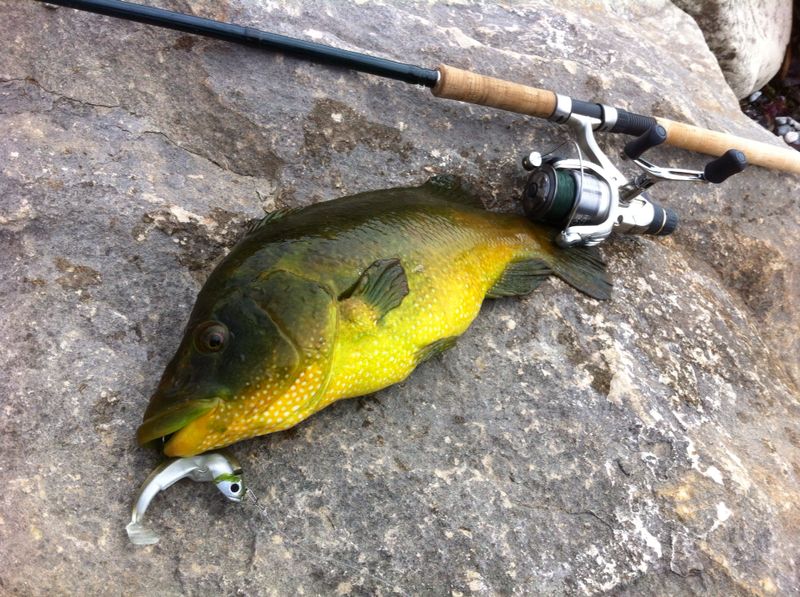 Wrasse like Pollock can be caught all around the Island on lures as well as float fished bait. You can also get them on the bottom, but tackle losses will be a lot higher.

Weymouth Bay: I took my kids down to the Stone Pier during the week and they were delighted with the number of fish that they caught. It was almost a fish every drop. It is a great easy venue to fish with loads of different species. Due to the large numbers of small fish it can be difficult to get a larger one, but if you cast away from the wall you will stand a  better chance.

One Response to "Gurnard Galore"