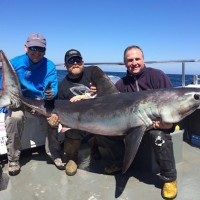 Fly Fishing for Blue Sharks On The UK Coast!

By Sean McSeveny On May 27, 2015 · 2 Comments · In Boat Fishing, Lure Fishing, Reports
Fishing for blue and other species of shark in the UK is becoming more popular year on year as anglers realise there are actually ‘big fish’ in our waters and it’s no longer essential to travel abroad to get into some serious action.

Some charter boats have been hitting the headlines for years with their catches, but increasingly, private boats are joining in the hunt for these spectacular creatures. Sometimes catches and particularly locations are deliberately kept secret, but in late autumn it’s not uncommon for charter boats around the South West coast, Wales and Southern Ireland to record multiple catches.

Rok Max Sports Fishing supplies all the shark fishing tackle that an angler needs to challenge these fish by conventional means BUT we also promote another exciting way to catch these incredible ocean predators… on fly fishing tackle!

Why on earth use a single handed fly rod to catch a shark? Good question.

Picture this. You are on a charter boat drifting for sharks. The four heavy boat rods, perhaps in the 20 – 30lbs class and upwards are stuck in holders and the large multiplier reels set on the ratchets. You sit watching the 4 floats, or more commonly plastic bottles, as they bob about at different distances from the boat. You sit and wait through periods of inactivity filled with pleasant but unrelated fishing conversation. Suddenly one of the reels screams as a shark hits a bait and its fish-on. You have already agreed who will get the honours, so the rest of you sit back and watch the fight, which could last up to an hour. Maybe after a couple of fish it’s your turn and finally, you get your chance to get in on the action and after several hours maybe actually hold the rod! 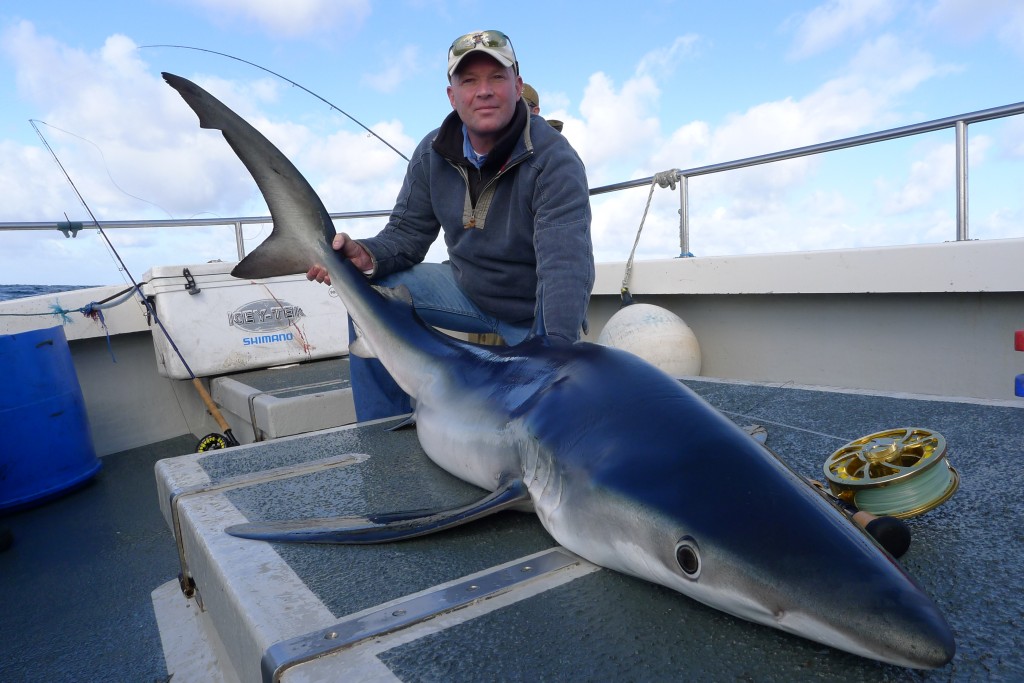 a blue shark caught on a fly!

Now imagine another scenario. You and your buddies are all fishing. Instead of the conventional tackle, and sticking the rods in a holder, you are standing with a slender fly fishing rod in one hand, and holding the non-stretch fly line gently in your fingers with the other hand. You reel has no gears but you have set the drag so it’s difficult to pull off by hand.

You sense rather than feel something strange with the line. Was that a slight pull? Did I imagine it? The next few minutes pass without further event, then you feel a slight but perceptible pressure building, and the loop of line slowly starts to draw back into the depths, until it meets the tension on the drag and everything goes solid. You let the rod creep forward with your arm and then strike by pulling the rod backwards in the direction it’s pulling away. And then you hang on – tight. Don’t touch the reel handle as the fish strips the fly line and backing off at an alarming rate. 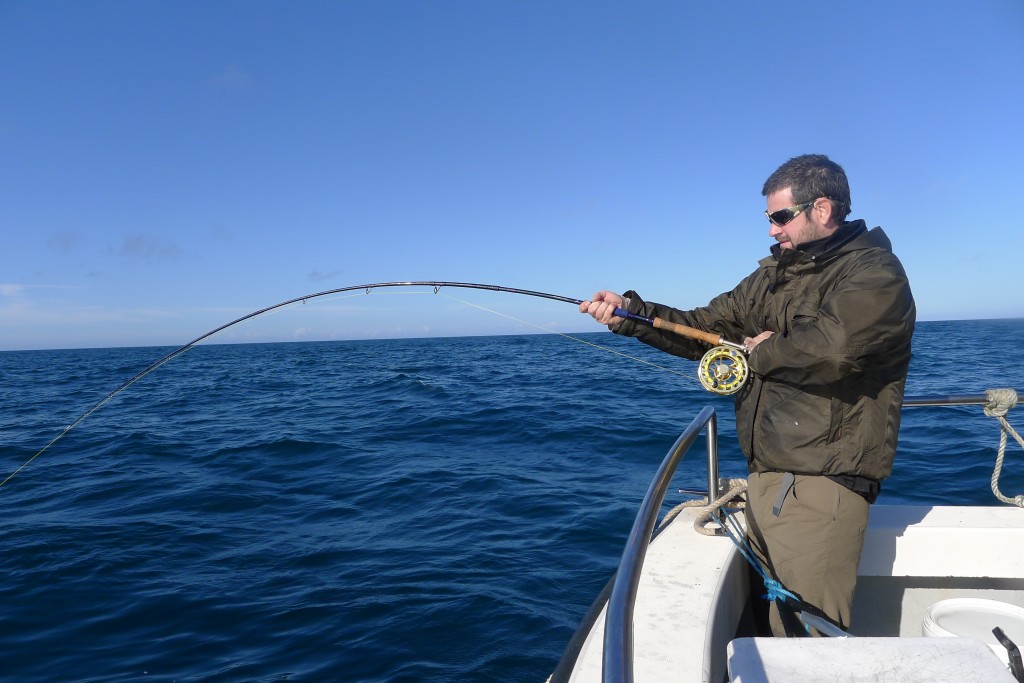 Modern fly rods, in the right hands, can subdue a shark as quickly as a standard boat rod, but don’t underestimate the fact that you have no gearing on the reel, and this is a single handed rod!

Aside from the obvious challenge, some of you might have picked up on what we see as the biggest attraction of fishing for sharks this way. It’s all about contact.

There’s no sitting about waiting your turn. From the moment your line is in the water, to the moment it all goes solid, you feel everything. It’s not uncommon to see guys with their eyes shut in total concentration as they try and decipher between the line touching a wave, or a shark mouthing and dropping the lure. Don’t be afraid to experiment. If you feel there is a shark interested, try and induce a take. Retrieve a bit of line, see if you can trigger a strike. In clear water, you might even be able to work your fly back to the boat and watch the shark following it. 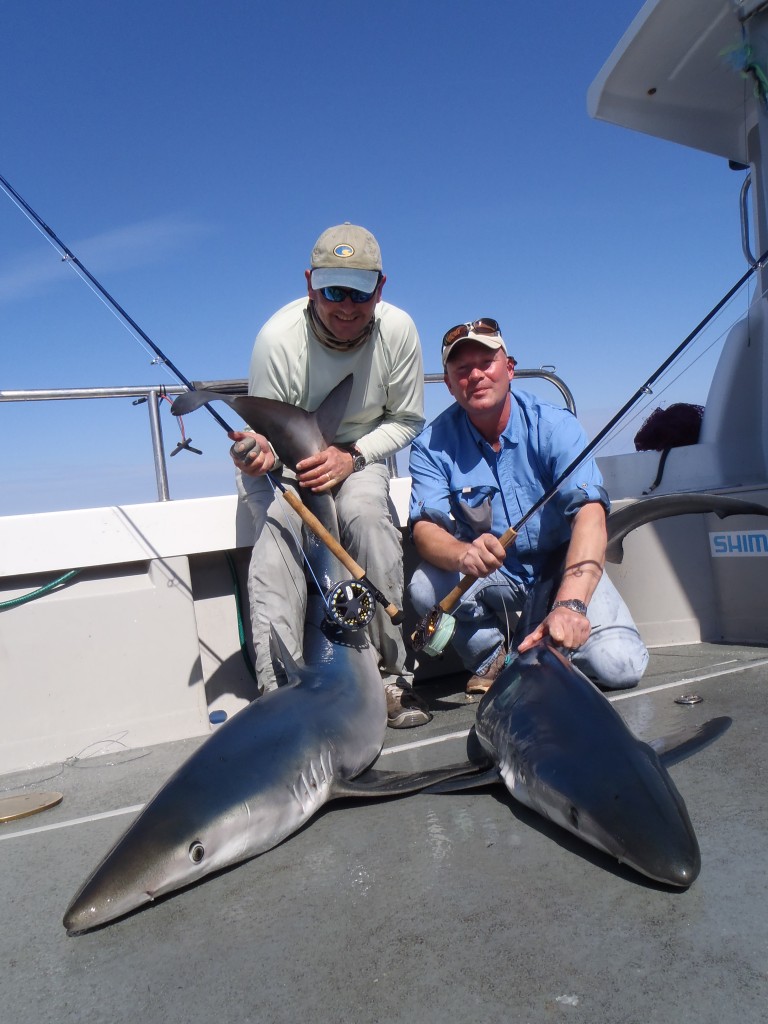 So what about the gear?

Let’s be very clear about how we do this. While we do make up cast-able leaders, at the end of the day, you are not going to cast a 4ft bite trace and 12ft rubbing leader made of 275lbs cable very far. Factor in the proximity of your fellow anglers, the skipper, a rocking boat and s 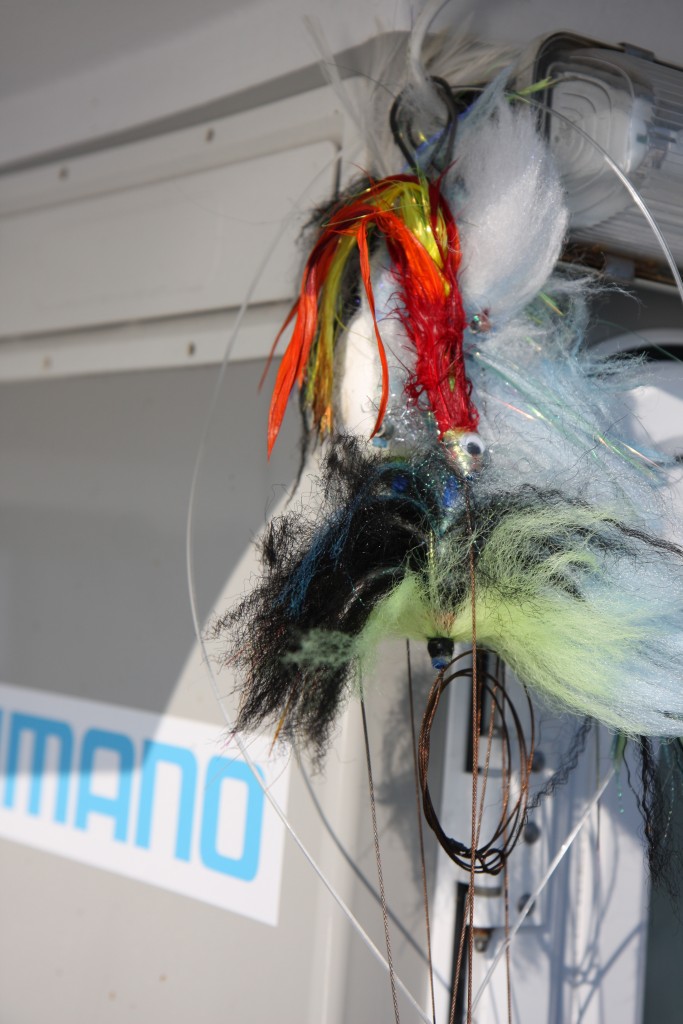 ome expensive antenna and radar and your best forgetting any ideas about gracefully casting your outfit without miss hap. The practical approach is to drop the fly in first, and gently lower the bite trace and leader to ensure it is tangle free, before paying out the required distance of line. If several of you are fishing, fish at different distances from the boat to avoid tangles, and don’t worry if you are the rod fishing nearest the boat. Many sharks will pick up, drop and move past a bait, and end up nailing the closest one, sometime in full view!

We’ve tied and tried many designs of fly over the years. Some works of art last one encounter, while other sparse creations stand the test of time. Our experience shows that there is no particular colour preference. You need movement and a fly that will not wrap the dressing or tangle into a ball and mask the hook. Bear in mind also, that the fly will be sitting in the chum trail, and synthetic materials that are easy to wash are better than natural materials that tend to soak up fish oils when you come to clean your gear. While we rig shark flies on tubes, and they look great in the water, we have always found that adding a small strip of fish bait makes a massive difference.

And then there is the seagull fly. Yes you heard right. Sea gulls sit in the chum trail, and under some circumstances, it is possible to use a foam ball or egg shape, festooned with feathers to imitate a sea gull! Watch in awe as a shark tries to nail it on the surface. 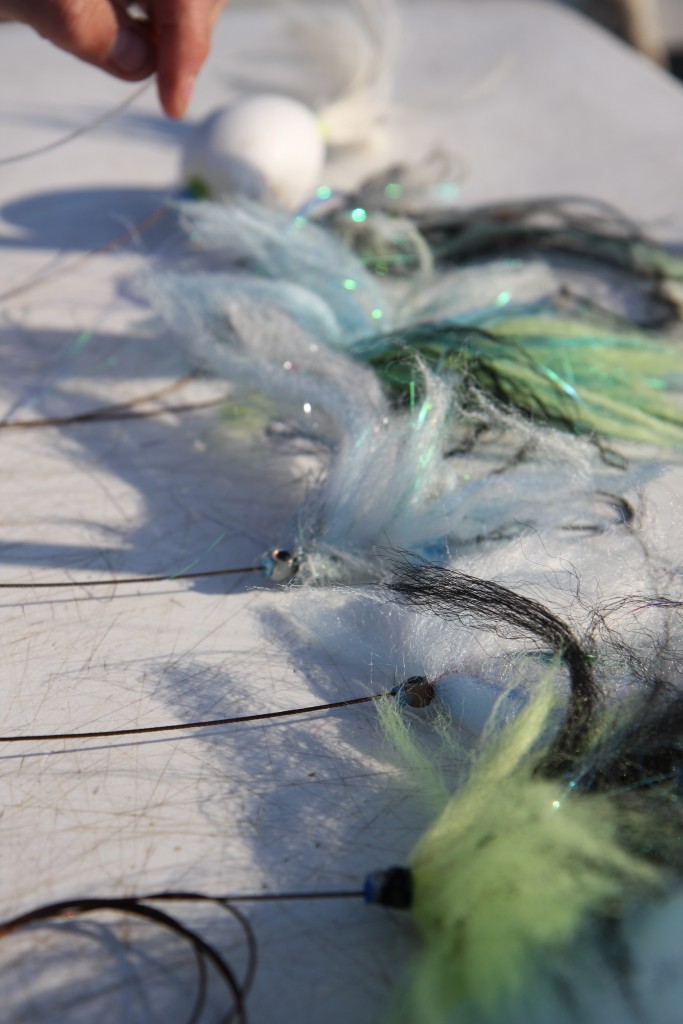 Seagull flies, or tube flies with a strip of fish, we make no claims to be fly fishing in the traditional sense.

Fly rods are classified by their line weight. The rods we use are not suitable for trout fishing, and your trout rod, should you own one, is not suitable for shark fishing! You need a rod that has plenty of backbone, and typically would be used for game fishing in warmer climates, chasing sailfish.

Your reel, which will need to hold around 350yds of backing, needs to have a good clutch. You cannot touch the reel while a shark is taking line, or you will hurt yourself. Again, a trout reel won’t cope with the rigours of shark fishing or saltwater so forget it. 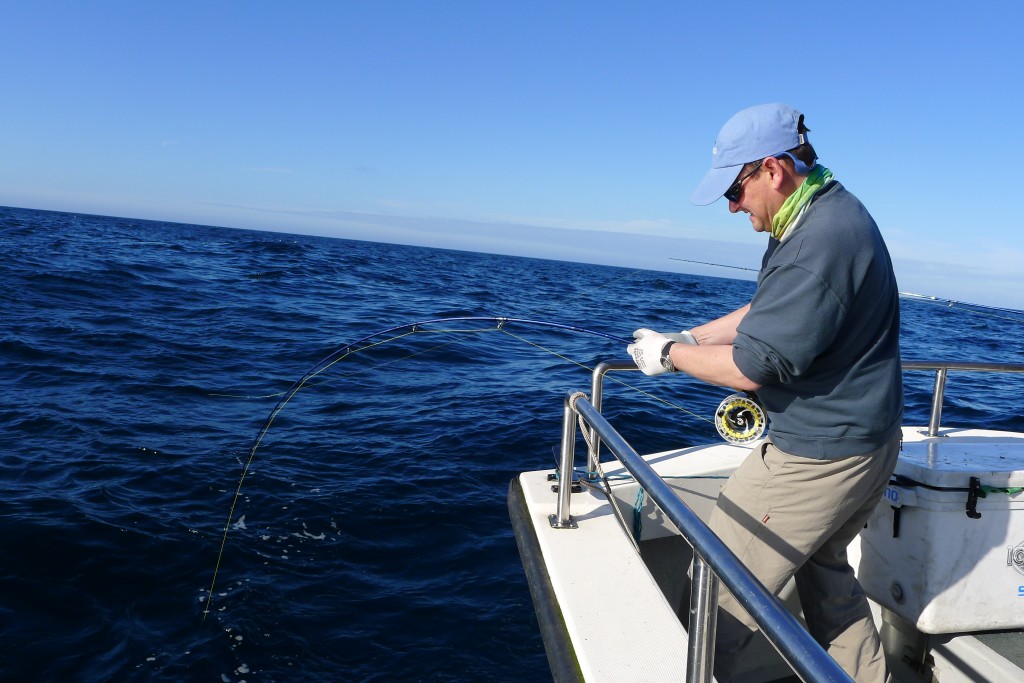 The fly lines, and we recommend using several densities to present the lure at different depths, and to cope with different speeds of drift, are easy to change during the day as conditions dictate.

The terminal tackle or business end is very similar to the standard bait fishing rigs. And that’s for a reason. 400lbs minimum bite traces are as essential as is the 12ft of wire rubbing leader. Forget mono leaders. When a shark rolls, and takes the leader across its mouth, there is no mono strong enough to stop it biting through, don’t be told otherwise.

And that’s all you need really. Just a couple of other considerations.

Safety First. Braided backing is like a knife when it’s under tension. Never have lose backing on the deck, and never hold the backing. Getting a foot stuck in a loop of braid as it is being pulled into the depths is not going to be pretty, or is wrapping it around your hands. For these reasons we would always recommend wearing gloves for this type of fishing, like those found in our Buff range.

Be careful when playing a fish to avoid another angler’s line. Some skippers may insist that the other anglers wind in when another is playing a shark. Fair enough but we have had multiple hook ups and lost good fish when lines under load have crossed and parted. Check your knots and lines after every session and discard and chaffed or damages sections.

During the fight don’t be tempted to hold the rod any further up the blank than the handle. Some rods may have a fighting handle, but holding the rod above the handle will guarantee a breakage. Most breakages are the anglers fault, not the rod. When fighting close to the boat, watch that the rod doesn’t get slammed against the railings or other objects, they will break under extreme circumstances.

Catching sharks on fly gear is definitely not a second rate means of tackling them, far from it. We rate success with our shark fly fishing tackle at least equal if not above conventional tactics in terms of effectiveness, mainly because of the direct contact you have with the fish before and during the point it takes your fly. You will not feel this with conventional gear.

Finally, if you really fancy trying this amazing way to target sharks, check that your skipper doesn’t mind and definitely speak to him in advance. Most skippers are very accommodating, but bear in mind it’s his boat and he makes the rules. 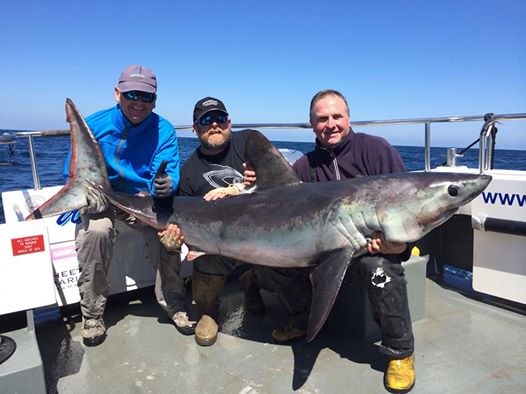 This article was written by Duncan Goldsmith of  Rok Max, who are the UK’s biggest suppliers of game, shark and big fish tackle in the UK. The team are passionate shark anglers, and have caught over 150 blue sharks on fly fishing gear in UK waters, as well as being the first to catch porbeagle sharks on fly rods.

If you would like to know more, then please feel free to contact us on 01635 500399 and we will be delighted to share our experience with you.

2 Responses to "Fly Fishing for Blue Sharks On The UK Coast!"