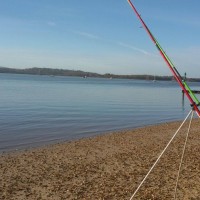 Floundering about for Bass

Finally, at last, good weather!
The weatherman had got it right, the wind dropped away to a gentle breeze and clear and bitterly cold conditions descended on the harbour this weekend. 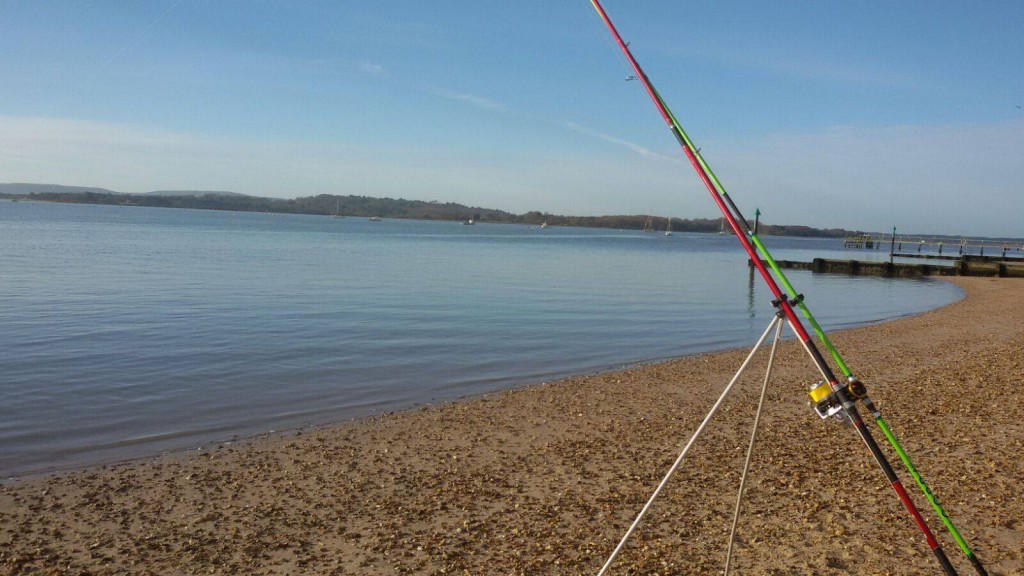 I had cancelled a invite from good friend Simon Bristow to fish with him at the Bristol channel. I was supposed to work most of Friday night and all Saturday day. By Friday afternoon it was all change and I finished for the weekend at 5pm on Friday teatime.
I needed no further encouragement and by 6pm I was at Lake pier beach loaded up with all my gear for an evening flounder session as well as a fork to dig the bait I needed. Due to the weather conditions the spring  tide had gone out extremely far, however this didn’t help my bait collecting. After nearly two hours of hard digging I had only dug just over a dozen ragworm. I was able to bulk up with lugworm, but experience has taught me that on its day ragworm will outfish any other bait in the harbour especially the flounder that I was after. Undeterred I fished the flood up and almost on cue as the sand/mud flats were covered by the incoming tide. I had a classic flounder bite, three slow nods followed by a couple more about thirty seconds later. I reeled in possibly the smallest flounder I’ve had this year! 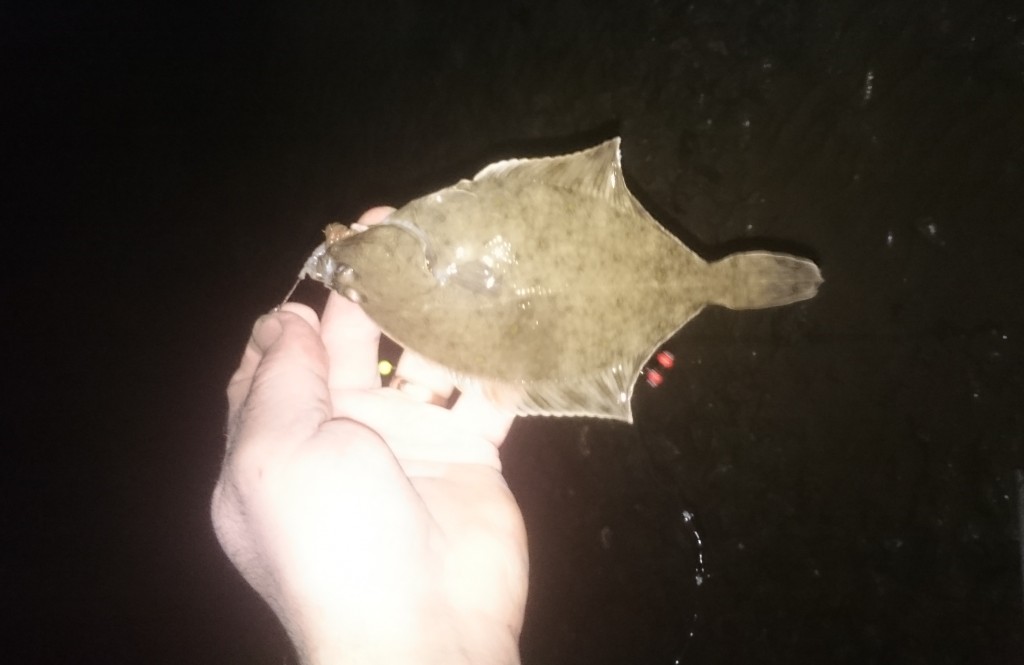 Ten minutes later I landed a slightly bigger one. After that, there was a lull and around 10pm the cold was really starting to bite! Any exposed skin on my face or hands was really starting to hurt.
Thoughts of packing up started to creep in, when I saw a sharp tug on one of my rods followed by a big slack line bite. “Thats not a flounder bite”,I thought! I wound up the slack off the deck and leaned into the fight of a better than average school bass. It fought like a demon for its size as it tore up and down the beach. I was very surprised to beach a bass I would guess was only the best part of a pound! 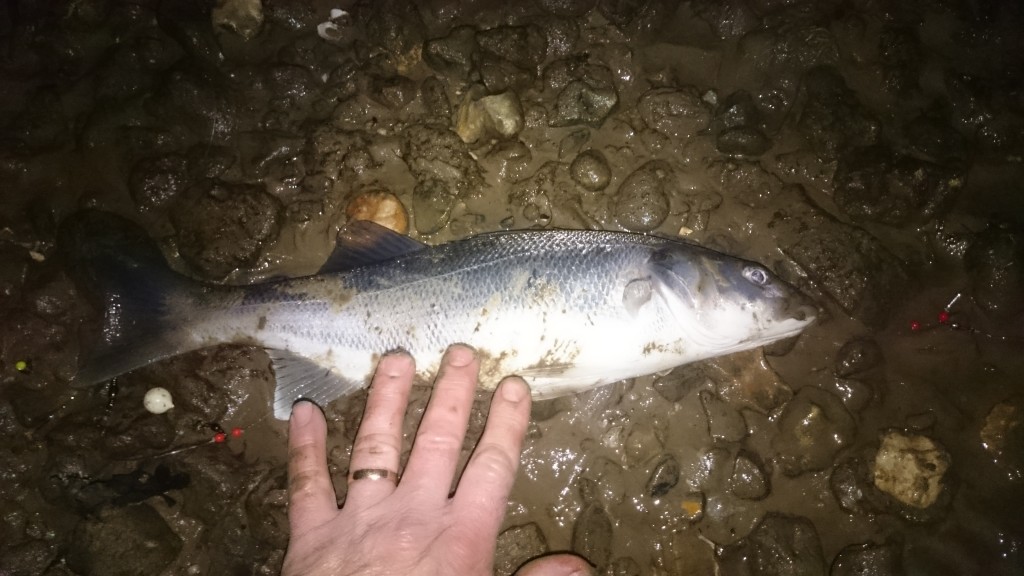 That bit of excitement really warmed me up and I rebaited and cast out again with renewed enthusiasm. I reckon I was fishing no more than 60 yards out and in no more than 2 feet of water when the same rod hooped over again! “That’s not a flounder or a schooly” went through my mind as I leant into better bass. In my headlight beam I could see a bass dorsal fin scythe through the shallow water as it kited up the tide. Keeping cool I gently played it in. After another dogged fight I walked a bass of around 3 or 4lb up the beach. I couldn’t believe it two good bass in the space of ten minutes, I have never known bass fishing like it. 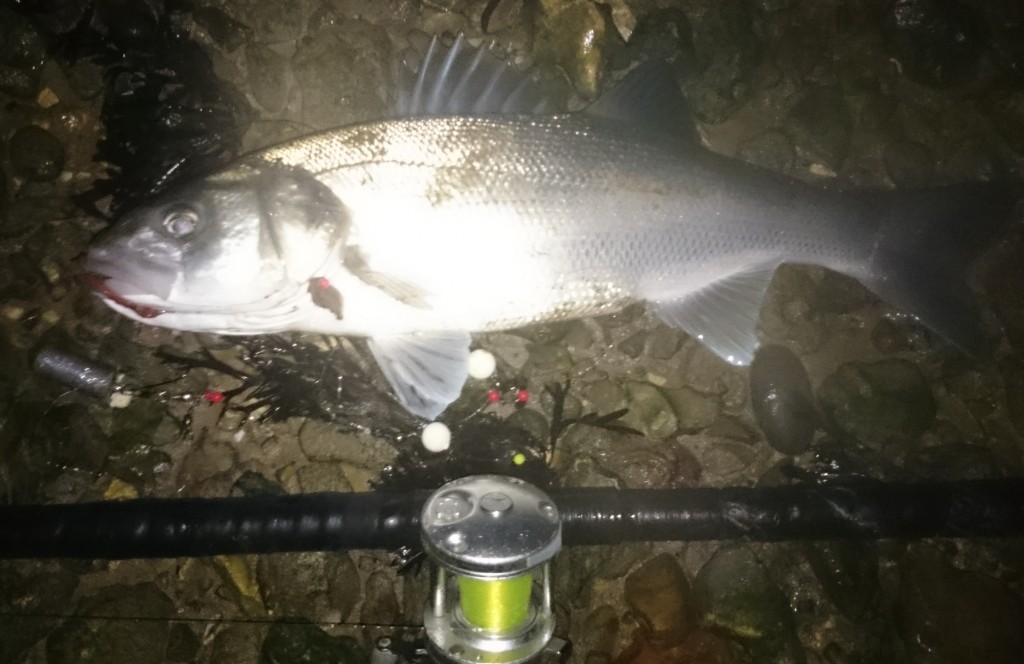 I have never caught so many better than average fish in a session any other time over the past couple of years.

On speaking to Sean he advised next time when flounder fishing,with the bass fishing so good. Take my spinning rod with some shallow water lures.

The reasons being
1: At least you’re moving about and keeping warm casting and working the  lures. It’s easy to stand still watching for for bites slowly letting cold creep in from your feet up.
2: This time of year, as has already been proved you never know what’s out there and what your going to catch!

I’m not going to get into all the reasons why the bass fishing is so good, a combination of a mild winter and recent legislation perhaps, but long may it continue!!
For me the conditions were perfect for the harbour’s main star this time of year. The humble flounder! I say” humble” but looking at all the fishing reports over the weekend.  Especially Saturday, a lot of people took advantage of the beautiful weather and went to a lot of effort to have a bash at catching themselves a flounder. The result was lots of good catches made in both size and numbers from all marks around the harbour.
My long suffering fishing pal Martin fished with his son on Saturday morning and had a good session at Hamworthy park landing some good flounder up to 2lb 10oz. Some of the biggest I’ve seen this year! Testing his new green cobra gt 420 he commented as usual none of the flounder were caught far out. The majority inside of 60 yards. 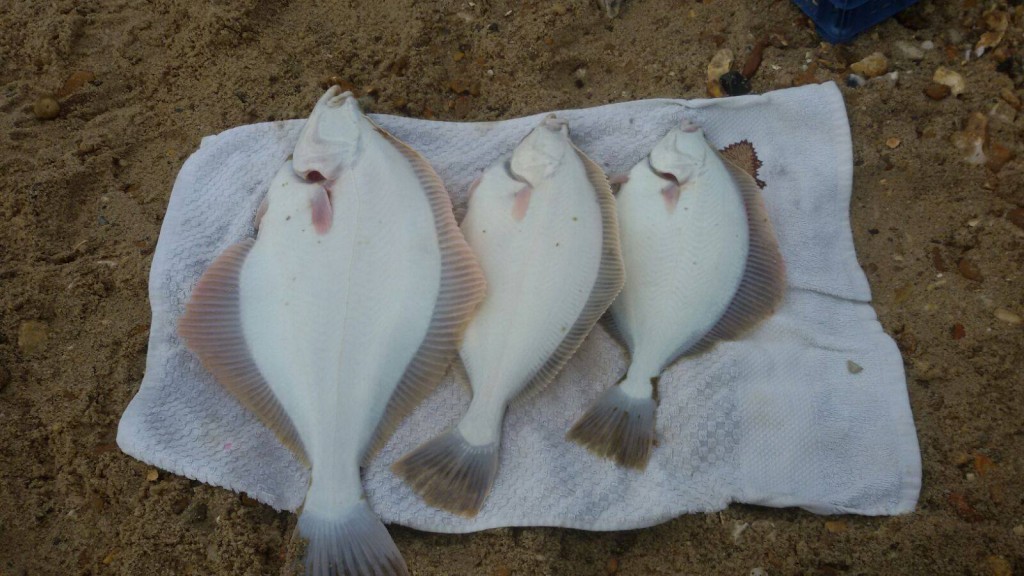 Shane Rudge fished with Andy and Mike Carter on Saturday in the lower half of the harbour and had a very respectable 17 fish between them. All of which were kept alive and returned to fight another day. I’m not beyond keeping one for the pot and fully welcome any different flounder cooking recipes!! I especially love flounder roe on toast. But you do have to draw the line somewhere and there is only so many flounder you can eat. Well done lads, good ambassadors for the sport by releasing all that you caught. 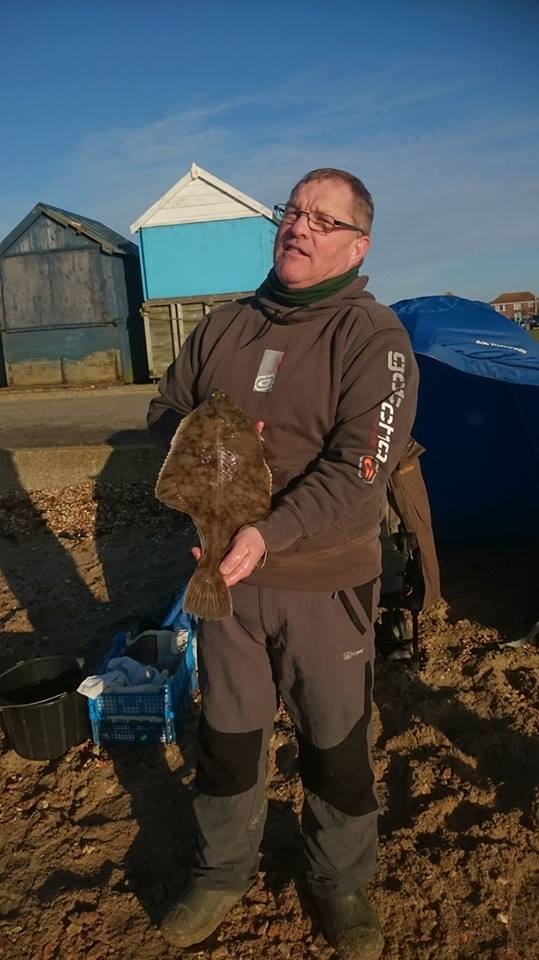 I would like to hope that the flounder hang around for another couple of weeks. Before they move off to deeper water spawn. Good to see that for now at least, they are still around in good numbers and still being caught from all the harbour marks. Generally around the end of January and February signals a fairly quiet spell for fishing around Poole and the surrounding beaches. Apart from scratching around for odd smaller species.I find this is a good time to check the tackle box. Make any repairs to tackle and kit.Overhaul those reels abused over the winter. Check rod eyes for any defects or cracks. Start making new rigs. Cut up the old and weary looking old ones  and generally start to prepare for the spring and summer ahead!
When the plaice start showing I will report on them in due course.

One Response to "Floundering about for Bass"