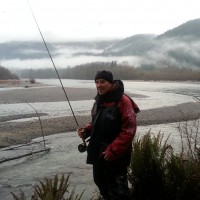 Fishing the Fraser River in Canada for White Sturgeon

Right now I am sat in the departure lounge in Manaus in Brazil, looking forward to getting home.
Some of you guys know that I have been away for the past couple of weeks filming a program that will go out on National Geographic Channel in the spring of next year. I am not allowed to say too much about the fishing that took place during the filming, but I can say a little about the fishing when I had some down time from filming. 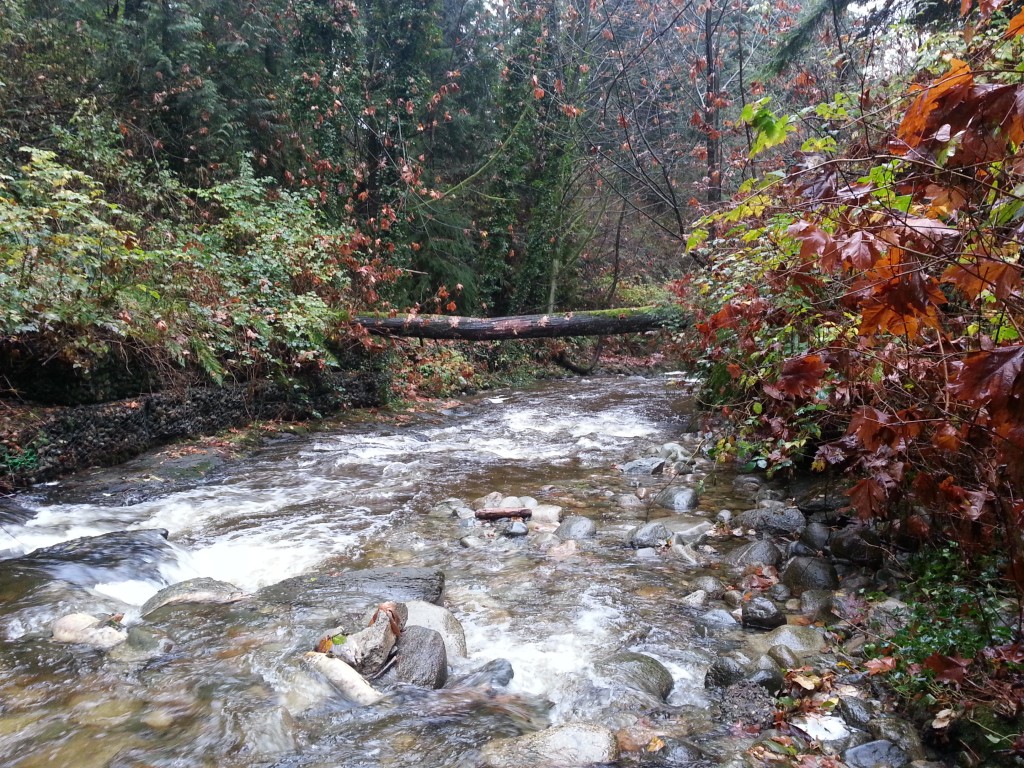 A few pictures of the stunning scenery in British Columbia 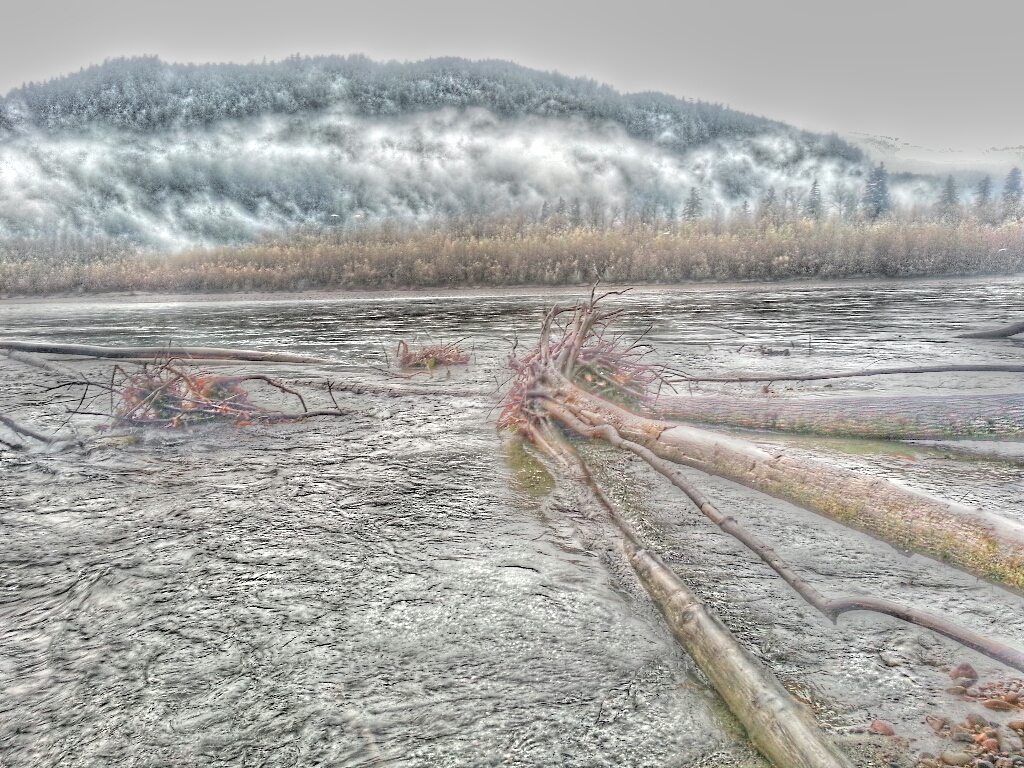 My first destination was Vancouver in British Columbia, Canada. The first day I managed to get off I organised with my driver to get me a fly rod and some flies. We headed off to an area about an hour outside Vancouver on the Squamish River. When we reached the area I was amazed to see loads of dead Salmon that had obviously already spawned. What amazed me even more was the number of live Salmon that I could see in the river. I cast a fly out and almost instantly managed to hook into a Salmon that very quickly shook the hook. A few cast later and exactly the same thing happened. There was so many Salmon that they were almost queuing up to take the fly.

Eventually I managed to hook and hold one. It was a decent size and for most of the fight it kept returning to the same rock each time I managed to gain some line on it. After a last ditch effort at escaping and heading down stream at speed I managed to land my first ever Salmon. A lovely fish of 18lb. I managed another 3 after that before we had to leave. 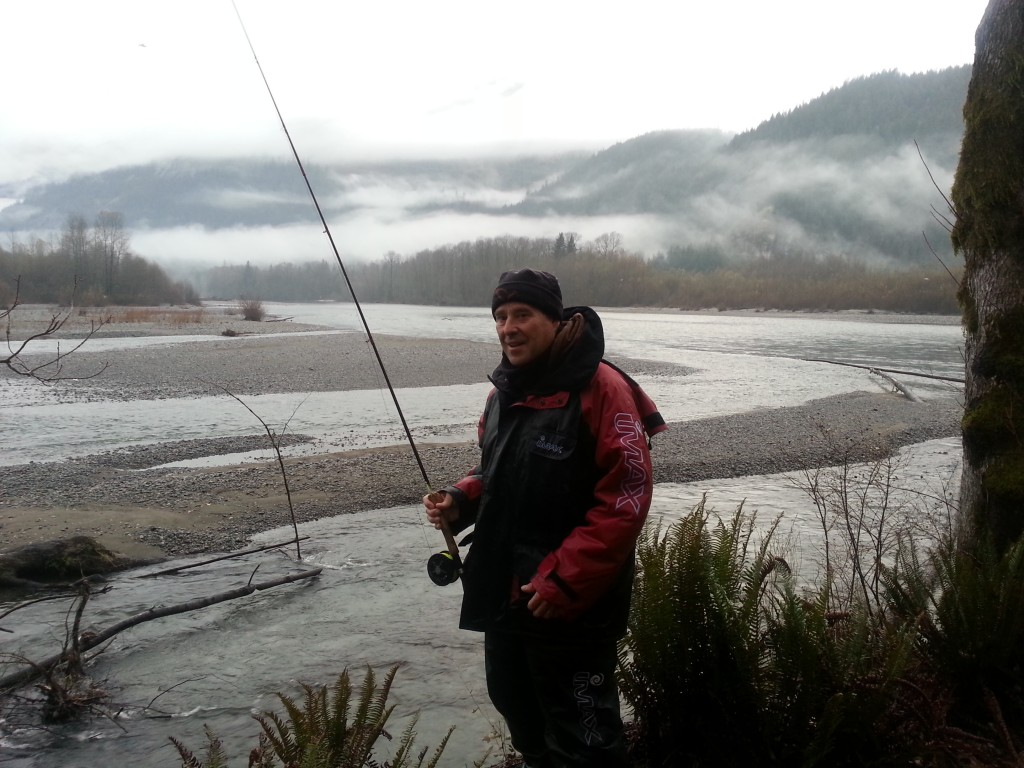 My next rest day was about 3 days later where we still had to do a bit of filming in the morning. This gave me an opportunity to get out with Kevin Estrada, a well known NHL Hockey player and owner of Sturgeon Slayers one of the best Sturgeon fishing guides in all of British Columbia. We were also accompanied by Pepper Stebbins an American that lives in the Amazonian Rain Forest.
Kevin and Pepper are also on the same program so we were happy to take a break from the cameras. We were fishing the Fraser River near Fraser Canyon.

Kevin had told me that he was aiming to get me into a 6ft long White Sturgeon. To say that was more than a dream was an understatement. Kevin owns a very fast and nimble jet boat, which he seems to drive with as much speed and aggression as he does when he covers the ice in a hockey match. It wasn’t long before he took us to an area that had a drop of that went down to 34ft just of the main channel of the river. We anchored up and sent down a large flank of Salmon and a 1 1/2lb weight. He had scanned the area with his Hummingbird side imaging scanner and we could see some large fish showing on it.

We didn’t have to wait long for the first bite. It is normal when Sturgeon fishing that one person fishes all four rods at once and we rotate in turns. it was Peppers turn to be up first and as he wound into the fish the rod bent over with a very nice curve indicating a lovely fish. My job was to get the other rods in whilst Kevin started the engines in case we had to chase the fish. Just as I was about to lift the last of the rods I noticed that it had started bucking. My initial thought was that it was the same fish caught round the line, so I just started winding up slowly so as not to knock Peppers fish off. As I took up the slack I thought that the fish seemed to be very heavy and put a bigger bend in the rod than was on Peppers. At that point both lines went in opposite directions. This was a double hook up. The next thing I know is my fish is stripping line so fast that the I had to check the drag was on. It certainly was on and on hard, the fish was stripping 200lb braid off the reel quicker than an express train. “Try and slow it down” Kevein screamed. He must have been kidding. I was getting slammed from one side of the boat to the other and I was crashing into Pepper who was also trying to tame the beast at the end of his line. Kevin’s job was now doubly difficult he was trying to follow two fish that had different ideas about where they wanted to go. Peppers fish kept trying to get under the boat and mine wanted to head across the current as fast as it could. At one stage I was sure Pepper’s fish was going to shatter his rod as it was bent completely in double and a third of it was in the water. Some how he managed to get the fish’s head up and beat it. My fish however had other ideas as all of a sudden it launched itself clear of the water. It was massive, 7ft of White sturgeon just flew right out of the water only a meter from the boat.

I could go on for ages about how long it took to tame this beast but I will keep it short and say it took me another 20 minutes before we could beach it. I was knackered and delighted at the same time. Kevin is one of the directors of the Fraser River Sturgeon conservation society, so he was very keen to check the fish for a tag, measure and release it. It had never been tagged before so he tagged it. The fish was 7ft 2 in length and was estimated to weigh 220lb. Peppers was a baby at 5ft, but still weighed close to a 100lb. 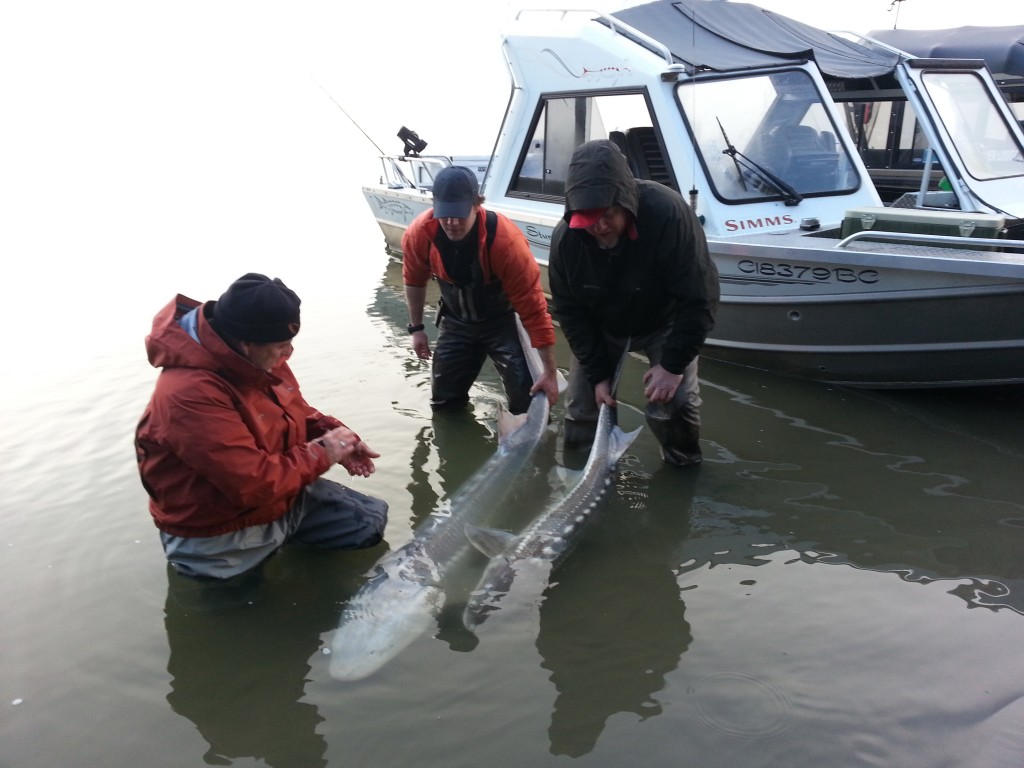 A double header of Sturgeon

What a great way to spend a few hours and we had a few more big fish over 6ft. I am not allowed to say too much but I did have a true monster fish during filming, but you will have to wait until the spring to hear about that one.