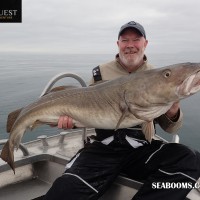 Venturing to Norway in search of huge cod is a dream fishing trip for me and high up on my bucket list. I’ve thought about a trip for a long time because among the cod would be the chance to catch halibut, coalies, wolfish and a few nice plaice too. So when a spare place became available on a trip from 18 March, I grabbed it.

Staying at the fishing camp in Skjervoy and boat fishing using an Arvor 19ft with all electronics for the period and taking beach and spinning gear for any downtime when we can’t put to sea due to weather, 6 days solid fishing should hopefully provide not only new PB’s but a lot of useful information for future trips to Norway. We have all owned our own boats I used to have the 23ft Wilson flier and others and my angling buddies also have boat experience, plus with the kind offer from a valued customer of sea charts with good marks pinpointed with GPS we should have some good results.

Nice self catering cabin at the camp with all mod cons so comfortable accommodation and the fishing centre can fulfil any needs for tackle and advice that we may have. It’s going to be cold as so many softies who only go in the summer have pointed out to us, shopping for the right gear has been enjoyable and as I’ve been to Norway a few times to ski I do know what works for me to stay warm and dry.

Floatation suit a Sunridge two piece, thermals two piece, hoods and beanies, good ski gloves waterproof two pairs, thermal socks, thinsulate fingerless mittens and I’ve already tried my boots, the Sunridge Hotfoots on a couple of UK wrecking trips in cold weather and they’ve been really good, only one downside they’re not totally waterproof so will have to watch that on the beach fishing if they’re likely to get wet.

Last year the head guide Paul Stevens from Sportquest Adventure holidays kindly agreed to take some large prototype lures with him on trips they organise for angling groups. The brief was to come up with lures that obviously catch fish and hang together under the ferocious attacks from large Cod, Halibut and Coalies plus test hooks that do the business and don’t break or straighten out at the wrong moment.

The examples you see are the range trialed and the Bombers I used first time out wrecking in the UK and first drop it took a nice 16lb Cod and couple more followed until the wreck claimed the lure. Despite others on the boat taking the P*ss it fished well and when that Cod landed on the deck as first fish of the day the P*ss taking stopped there and I was pleased it came up with good results.

Paul Stevens from Sportquest Holidays placed an order for a range of samplers with different hook configs mainly Sakuma and Eagleclaw big game hooks and tested them to their limits with most taking a good few fish before having to be retired due to teeth damage to the bodies. But it did highlight that my Superflex silicone rubber stands up well to large fish with a reported 116lb Halibut taken on one of my turbo supercharger curltails with a 9/0 hook and Cod to 53lb on bombers, plus many others as you will see in the gallery, Paul shot some amazing catch images using my lures with an Olympus TG4 tough compact camera and so impressed with the results I had to have one so that’s already in my kit.

So with good independant testing it’s my time now to get out there and give my lures and rigs a beasting, I will also be taking HD video kit and photo gear plus Intova and Waterwolf underwater cameras to document the trip and the lures in action so very much a fact finding mission as well as claiming some PB’s to try and better on future trips. Rods and reels I will be taking is a good assortment, three main reels a Diawa saltist HA20 loaded with 40lb low diameter braid this is the one I mainly use for UK wrecking so does the job well. New Spyder II 20/30 reel with 35lb braid and the 30/50 version with 80lb braid. Other reels, lighter baitcasters and a fixed spool with two spools one with 15lb braid and one 25lb and similar braids for the baitcasters.


I like fishing as light as possible as you can see by the reels and braid choices, how they stand up remains to be seen but all have been well tested in the UK, so should do the job ok, well here’s hoping. Rods will be the Blackrock Akita Japanese boat rods a 20/30lb and a 30/50lb 7.5ft rods with loads of action and a 20/30lb travel 4 piece also at 7.5ft. I have included two spinning rods one a travel section rod and the other an ultra light two piece, really going to enjoy using these as they’ve both been used and taken good Pollock out wrecking and it’s a reel buzz having a good fish on light gear. I’m also taking my fly rod 8 weight and reel to give them an outing and see what they come up with. What I will add non of the gear I’m taking is expensive top of the range gear that anglers spend thousands of pounds on and it may fall on it’s arse but with most kit that I have used for some years and albeit new out of the box I know they have performed well in the past out on the wrecks and inshore fishing plus I do get a buzz catching quality fish on cheap gear “It’s a head thingy”.

Along with a good selection of my lures I will be taking, my Ace fly tyer Martin Small has come up with some really good large flies which I have called the Nordic Collection and are complete with weed/rock guards that work well. I also suggested doing a fly to emulate a Redfish as they’re popular baitfish that Cod and Halibut hunt and Voila he did just that so all these will be getting a good wet and fished on the fly rod and drift fished on the light seabooms I manufacture. I’m really keen to get good results for these as Martin is a really great fly tier and angler for saltwater species, pike, salmon and trout and has good eperience in many locations around the world. I’ve built a section in my online store of his work and he will custom make for any requirements of flies you may need.

So all that remains now is the big wait to get out there and experience what I’ve dreamed about for many years and see how it all comes together, we all have plenty of luggage allowances so won’t be restricted in that area and with other tackle requirements being carefully planned out we should be self sufficient but there is as mentioned on camp a store for anything we forget. Who knows I might also see the Northern Lights another bucket list item to experience. These images and video links will show you why I’m so excited to take the leap and get my ass ! over there and there will be full reports good or bad when I get back along with hopefully some great video and images of the three of us into the action “Fingers Crossed”. The video’s were shot for me by a group who took my early lures out with them and achieved some great results as you will see and their efforts prompted me to continue developing my lure making.

Here are some links to the Norway page in my store and there you will find links to the Sportquests Blog and the latest updates on their adventure holidays especially Norway, plus a link to Martin Small’s fly page and galleries that you may also find of interest……TO BE CONTINED.