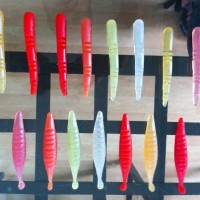 A little bit overcast today, but you shouldn’t let that dampen your fishing as the reports coming back from the few people that are fishing the beaches and rock marks are very good. Lots of decent Wrasse from Portland Bill and some nice Bream from Chesil.

Wind: SW18mph  currently there is no wind at all, but I am sure it will pick up as forecast.

Chesil Beach: 1.5m swell but at the moment due to no wind the water surface is calm. Water is clear

Portland: 1.5m Swell so be careful on the ledges. Water is clear 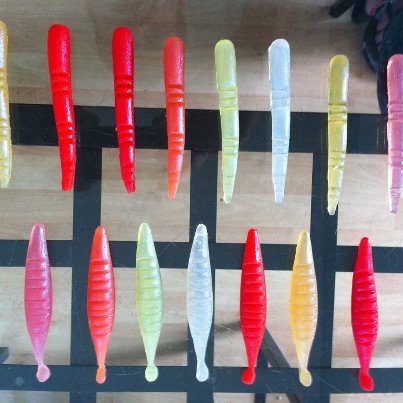 My range of Soft Plastic prototypes

The Western end of Chesil is producing some nice Thornbacks between Abbotsbury and West Bexington, they are falling to frozen Sandeel. Bream are being caught from Ferrybridge area towards Portland and Gurnard are all along the beach. I have seen plenty of Garfish activity, but have not gone out to target them yet. A float fished strip of Mackerel set at less than 1ft works well, as do small surface lures. Dusk brings in Scad followed by Dogfish and Pout at night. Still hearing of plenty of Smoothound falling to Peeler and Hermit Crab.

Portland: When are they going to move the Gill nets? It really is about time that the authorities in this country wake up to the fact that recreational fishing brings in more money and jobs than commercial fishing. I am not against commercial fishermen, but when it directly effects recreational angling then local bye laws should come into play. A few lucky fish are escaping the nets and Pollock catches have increased over the past couple of days. Wrasse fishing is good around the Bill. I spoke to one angler yesterday that was using Peeler Crab to target the larger fish. He was slightly upset when I started catching larger ones on my soft plastic lures. Far cheaper than a £1 a go for Peeler, plus his tackle losses. Hopefully another convert.

Portland Harbour: Wrasse and small Pollock are being caught around Ferrybridge. The shallow flats in front of the Rodwell trail down to the Sandsfoot sailing club have produced Flounder, some School Bass and small Bream.

Boat & Kayak fishing: If the winds get up as promised later today then boat fishing is not going to be very comfortable. The charter fleet are reporting some great catches and Turbot and Plaice can be expected on these nice sized tides.