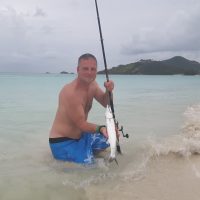 Apologies for the lack of posts over the last  few weeks as I’ve been working lots of hours and not doing much fishing. I needed to bank some money for the holiday of a lifetime I had booked.
Lying just off the coast of Venezuela is the jewel in the caribbean crown the tiny tropical island of Antigua!  This small island roughly the same size as the Isle of Wight and basks in the calm caribbean sea to the east, with the rough Atlantic to the West. The island boasts 365 beaches, one for each day of the year, that’s a whole lot of fishing potential! 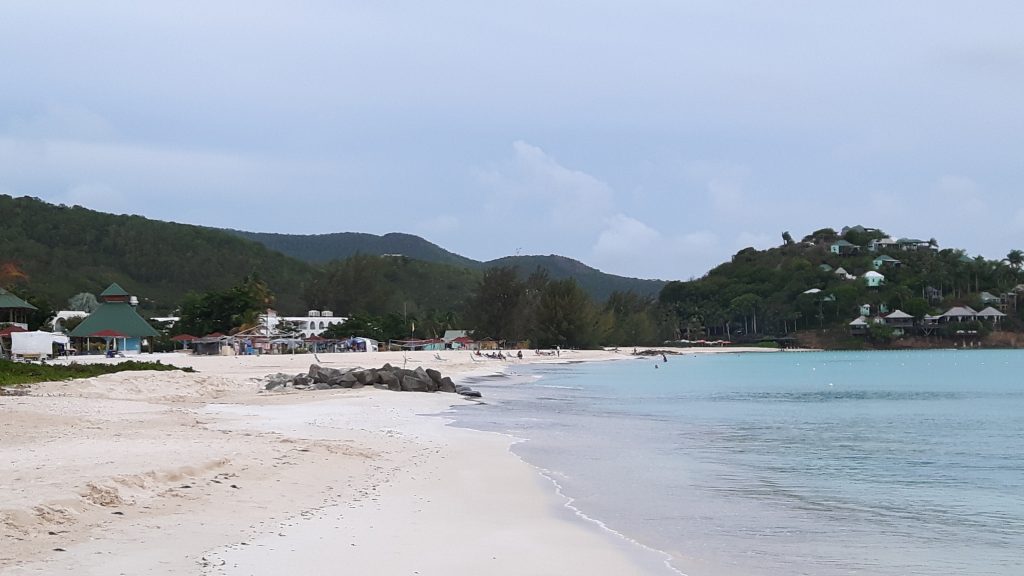 I was staying on the east side of the island in the Jolly beach resort for a week at the end of May. Situated next to the Jolly harbour, which is full of superyachts of the rich and famous. I had no means of transport other than on foot. So the other 364 beaches would have to wait until I win the lottery in the future. Jolly beach itself is a mile and a half long expanse of pure white sand flanked at each end of the bay by high cliffs. I had done a little research as to what species or type of fishing was available and the list was quite impressive, tarpon, snook, permit, bonefish, snapper and barracuda to name but a few!
This led me to a dilemma, what to take?  I had a half decent travel spinning rod buts for tackle, I wanted take everything including the kitchen sink. With only a few kilos hand luggage allowances some cutbacks had to be made.
A small fixed spool loaded with 30lb braid a couple of lead heads with shads. One or two Toby spoons along with some surface plugs saw to the spinning side. As for terminal tackle ,a packet of 5/0 circle hooks,a spool 40lb amnesia line,a few 1oz bombs and that was it.

On my first day after having spent a token amount of family time. I was itching to get fishing! Using the same basic principles as back in the UK. The plan was to sight fish, work up and down the beach, away from the main crowds, looking for fish signs. Breaking shoals of bait fish or signs of swirls on the surface or dark shadows moving around. Casting and retrieving soft plastics as I walked. 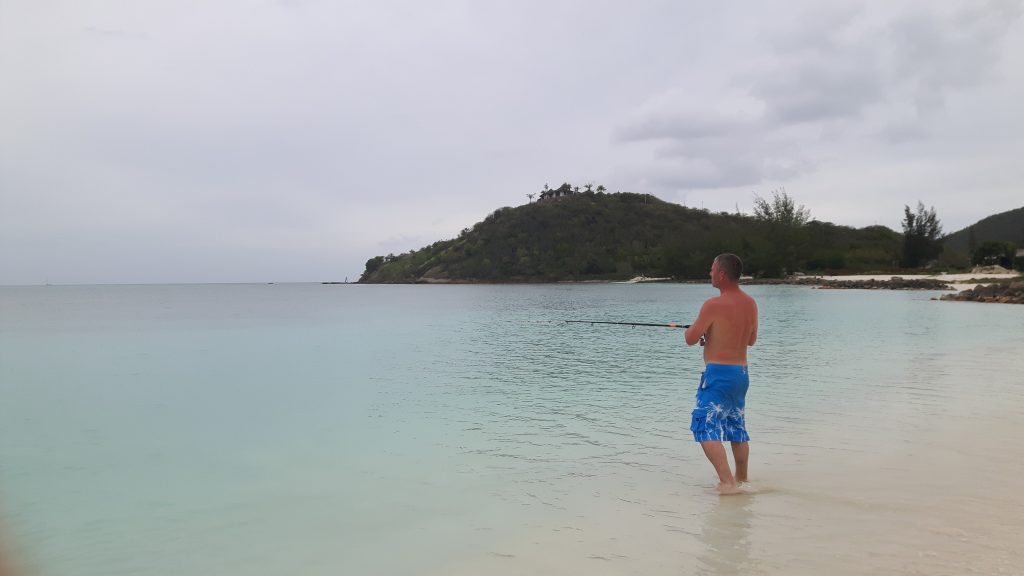 The first day I caught nothing and saw nothing.

That first evening whilst waiting for the rest of the family to get ready. I had a wander down to the beach at sunset. There was a fellow English angler with the same ideas as me.(Sorry mate I never did get you and your friend’s name).
This guy had been there a week before me and was full of useful hints and tips. He was casting off for the beach to the beds of eel grass some 50 yards offshore. With a running ledger and squid for bait. It was there that he had landed snapper up to 10lb in the week previously. He assured me this was by far the most productive method of fishing he had experienced though he did mention he had seen large barracuda working up and down the beach at first light.

Day two my mission was to find some squid!

The missus wanted to go shopping and  was very suspicious when I jumped at the idea! After visiting every shop in Jolly harbour. It would seem there was no squid to be found and there was a shortage of squid on the island!

So it was a case of resort back to plan B.

In between family time and trips to the bar for rum punch, obviously for the ice as keeps you cool!
I worked up and down the beach casting and retrieving hopping the lead head through the eel grass when bang!
The lure stopped dead. The rod hooped around and line tore off the light clutch. Regaining some composure I eased the unseen fish towards the beach. All I saw was a flash of silver and then it really took off. As the reel screamed I thought it’s a @#$%÷### bonefish. 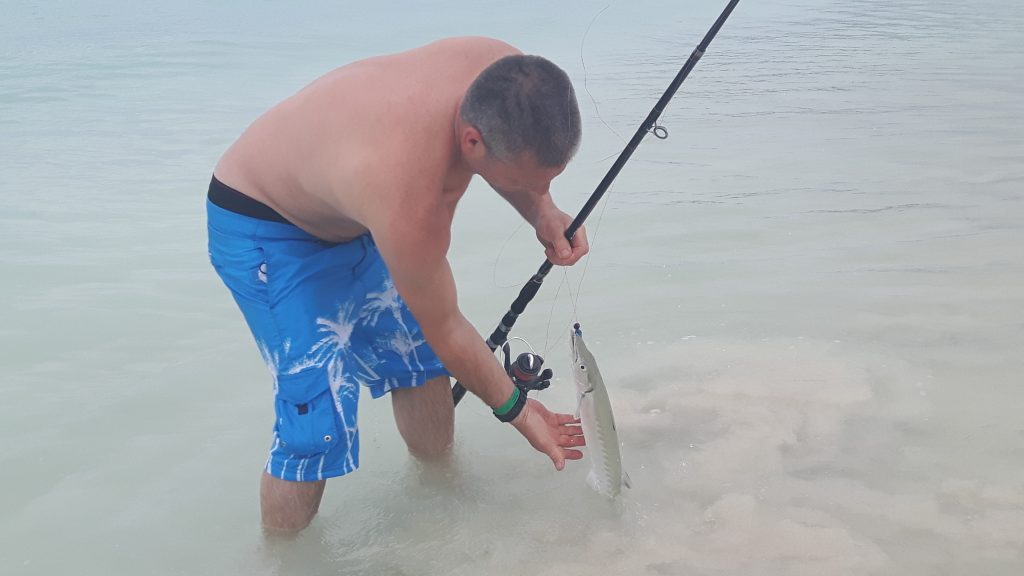 As I gained line and the fish tired a little . I got a better look and was slightly disappointed to see an angry looking barracuda looking at me.
Disappointed is the wrong word, I would have preferred a bonefish, but this little barracuda gave up a cracking fight. 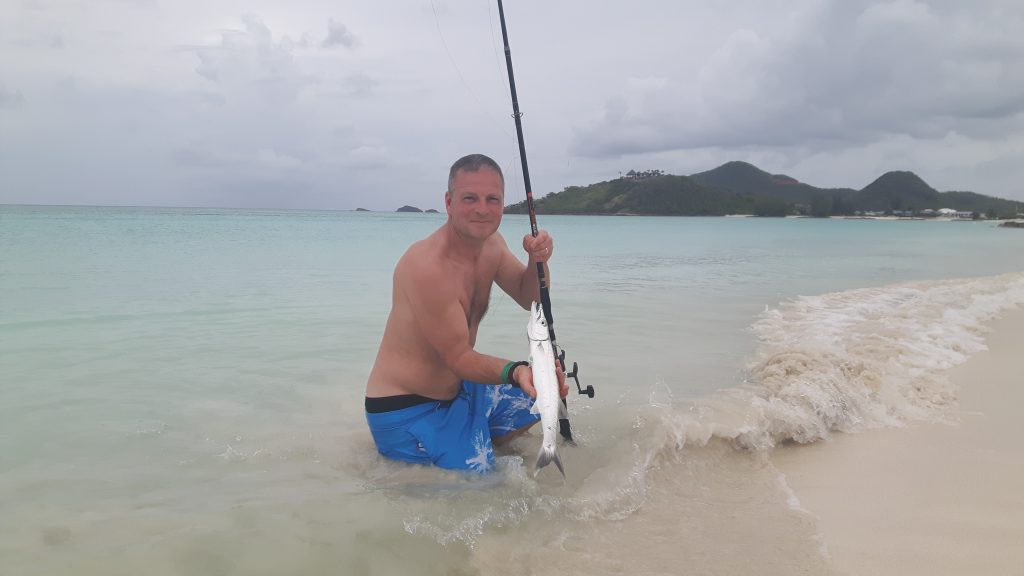 After a few snaps I went for a release but at this point there was mayhem on the beach as all the locals came running down the beach shouting and screaming as I let go their free meal that evening. I am all for catch and release but in lesser off countries gifting a family with the fruits of my sport may mean a family gets to eat a good square meal that evening. After apologising and making a promise to the guys that they could keep anything else I caught, I resumed fishing. My promise proved to be the kiss of death as after that I never had any more action, not a bite not a sniff.

A trip to Jolly harbour had me with my heart in spasms as 100lb tarpon rolled on and around my lure with no interest! 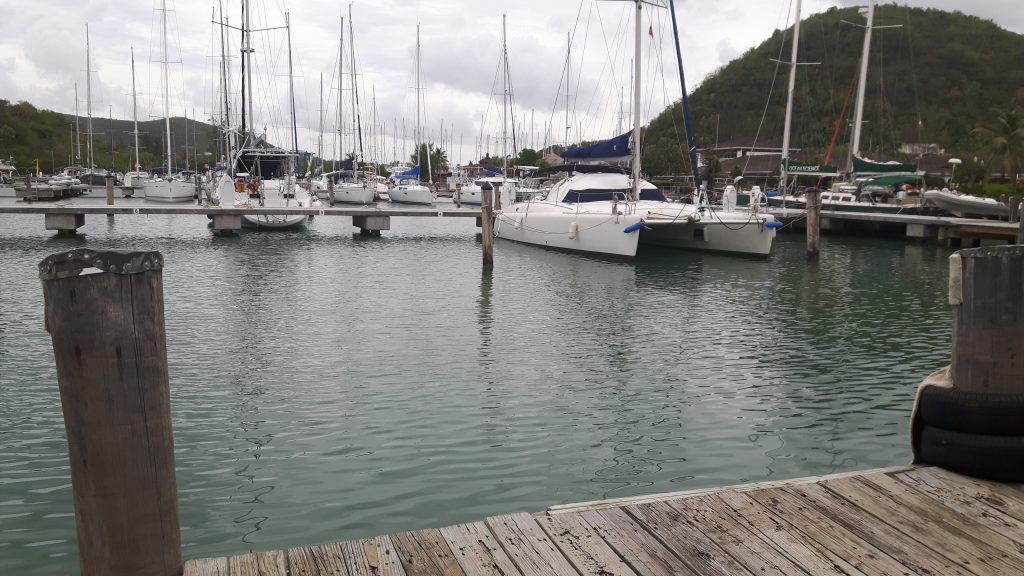 Days later I met fellow English angler Anthony, an Antiguan fishing regular, who pointed out to me the large snook working up and down the gutter at the waters edge. I cast lures in front of it, to the side of it, behind it, nothing! These fish were very hard to catch on lures. I have to concede that fishing at dusk or dawn with a big squid bait might have proved more successful!
On most of the menus on the island ,lobster is the speciality,  oddly enough when we were there it was off the menu. On enquiry i found that it was close season for them so that they can spawn and catching or keeping any lobster during close season is punishable by law.
Imagine my surprise ,whilst cooling off in the shallows, I nearly stepped on this beauty. 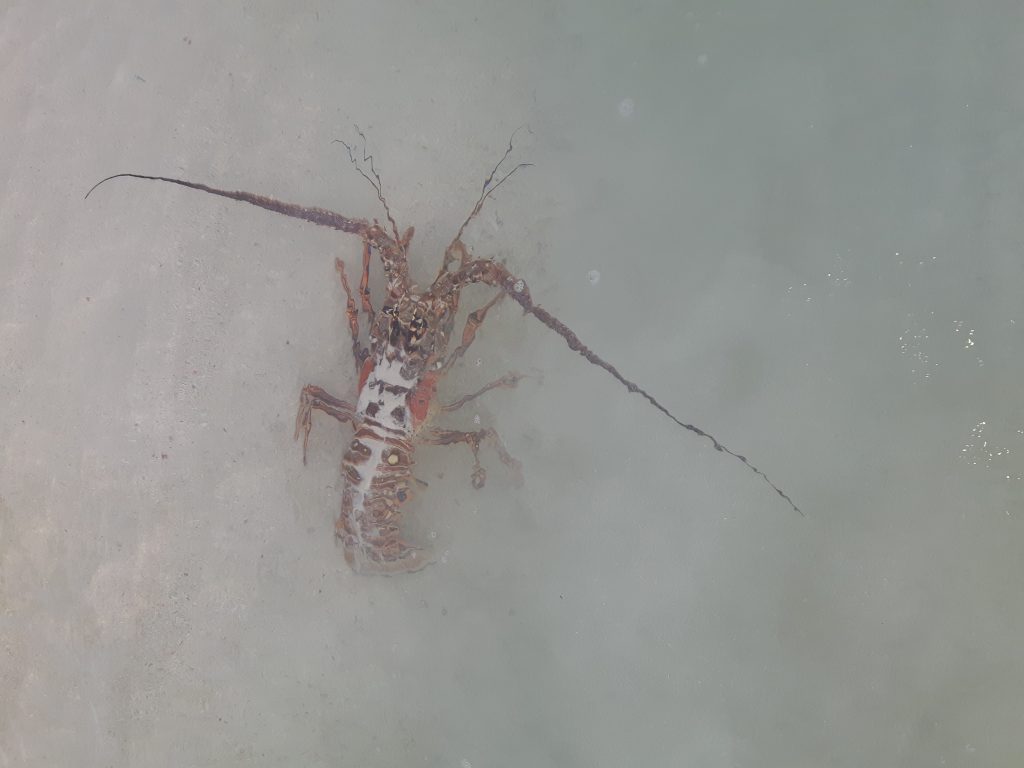 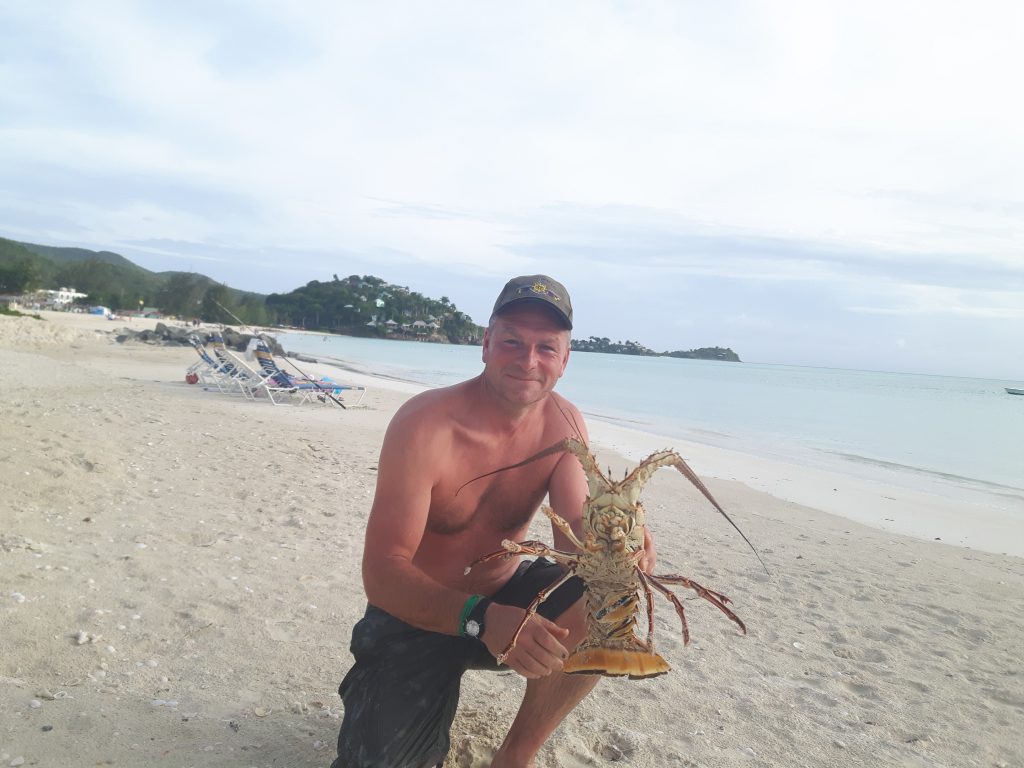 To add insult to injury. Once again out came the locals shouting and screaming. This time it was a prized delicacy and I really was public enemy number one ,as I released this beauty to make lots more baby lobsters. That really was it far as catches are concerned. I can’t complain though about the lack of fish. I saw loads, the rolling tarpon, the heavyweight snook in the gutters, the big stingrays in the shallows are fishing memories that I will carry in my heart forever. 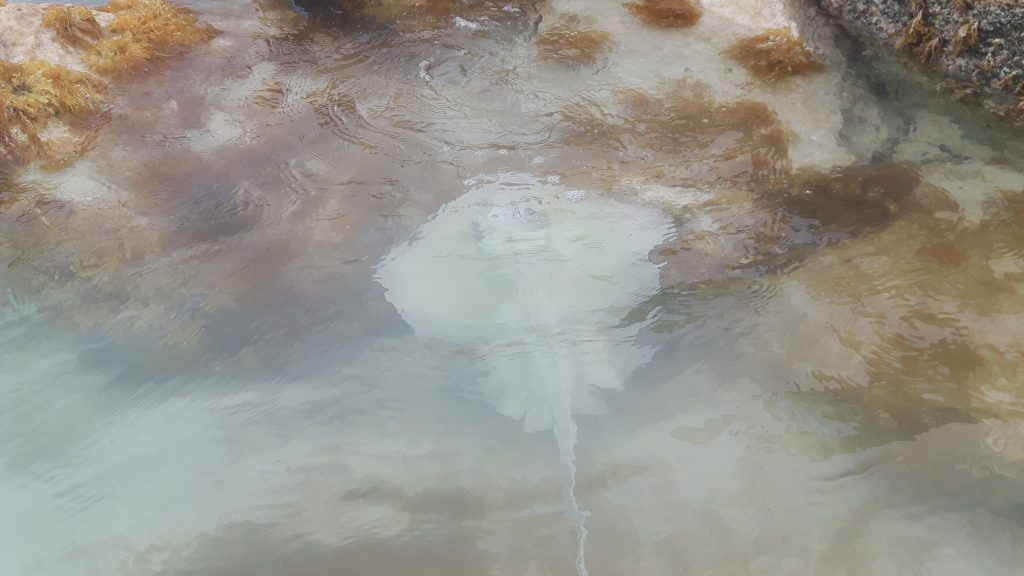 Out of the water the comical pelicans,the mongoose, huge frigate birds hassling the local gulls. Little hummingbirds buzzing from flower to flower outside our apartment.
It truly is a tropical fishing paradise. 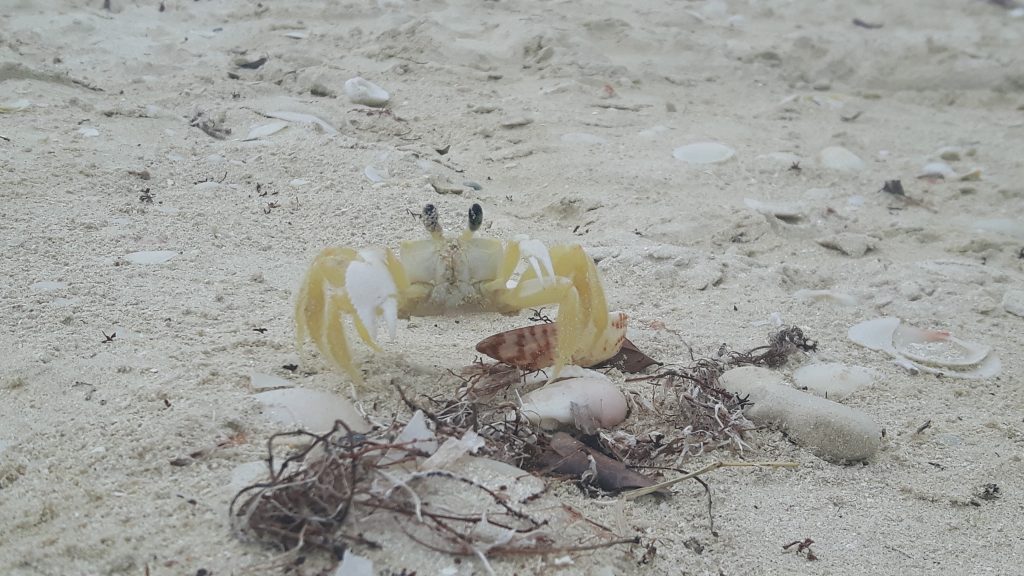 SUBSCRIBE
Carp off the top… Short fishing trip for Rays