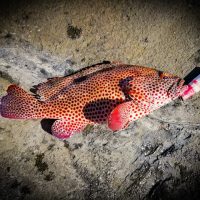 What do you do when you’re living by one of the best rock fishing marks in the world, you are literally thousands of miles away from the nearest tackle shop, and you have no lures? This is the situation I find myself in as I pen this article. A few weeks ago I moved to Ascension Island in the South Atlantic, and thanks to the MOD commandeering the next cargo ship, at the time of writing, the crates with my kayaks and fishing tackle won’t arrive for a few more weeks!

When I told my fishing buddies back in Lyme Regis that I was heading to Ascension Island their reply was either, “Where?” or “Isn’t that fishing heaven?” Ascension Island is a volcanic island near the equator, half way between South America and West Africa. It’s about 7 miles long and 5 miles wide and currently has about 700 inhabitants. Thousands of giant turtles nest on its white sandy beaches and the nearly 3000ft high lush Green Mountain, in the middle of the island, is home to bright orange land crabs. It’s a British Overseas Territory and is a small, very hot, home away from home! 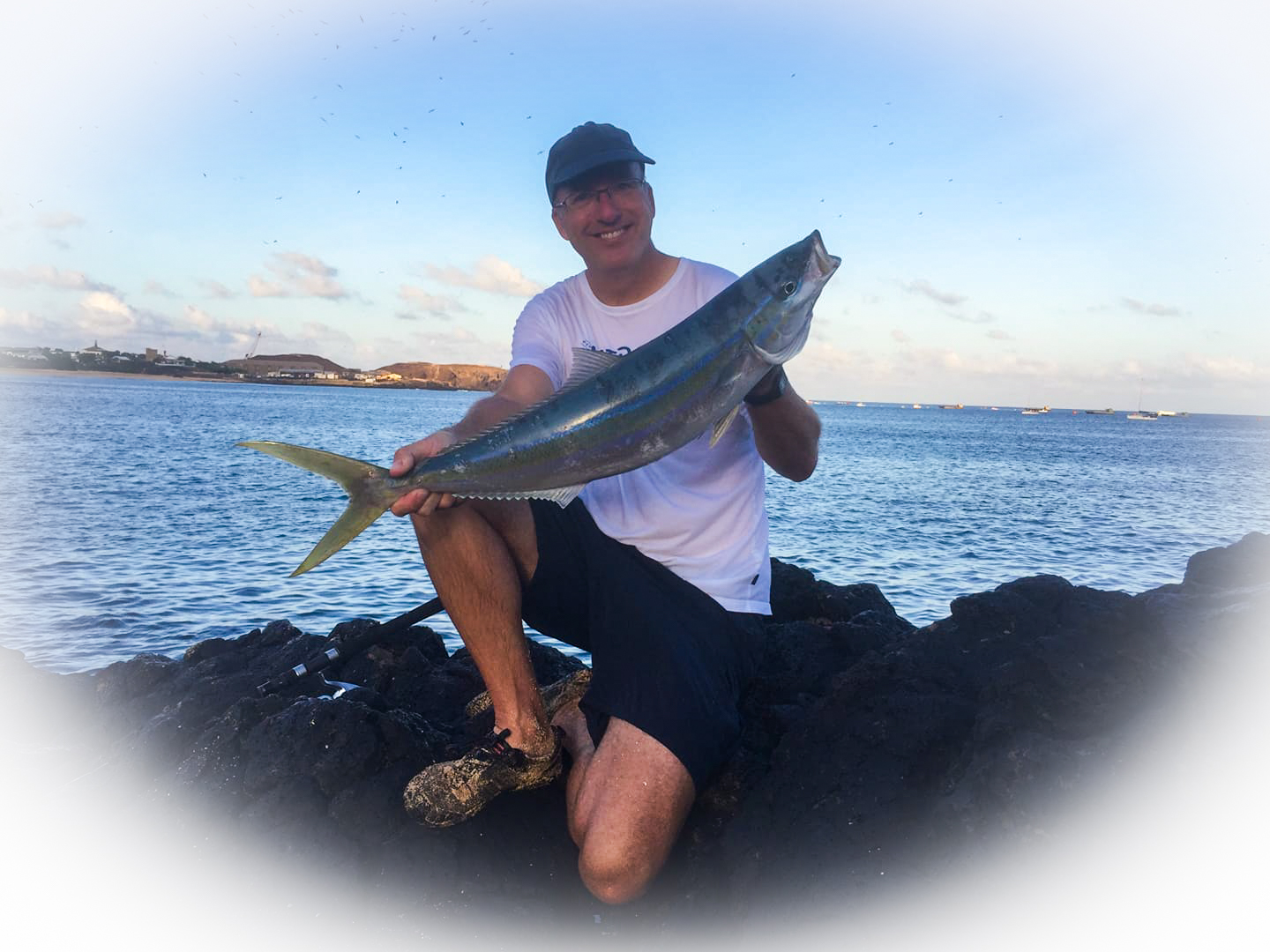 The fishing on and around Ascension is legendary. Apart from the big game fishing from the boat, targeting species such as Wahoo, Dorado, Tuna, Sailfish and Marlin, Ascension boasts some of the most exciting rock fishing on the planet. You can fish and catch from just about any mark depending on what species you want to target. 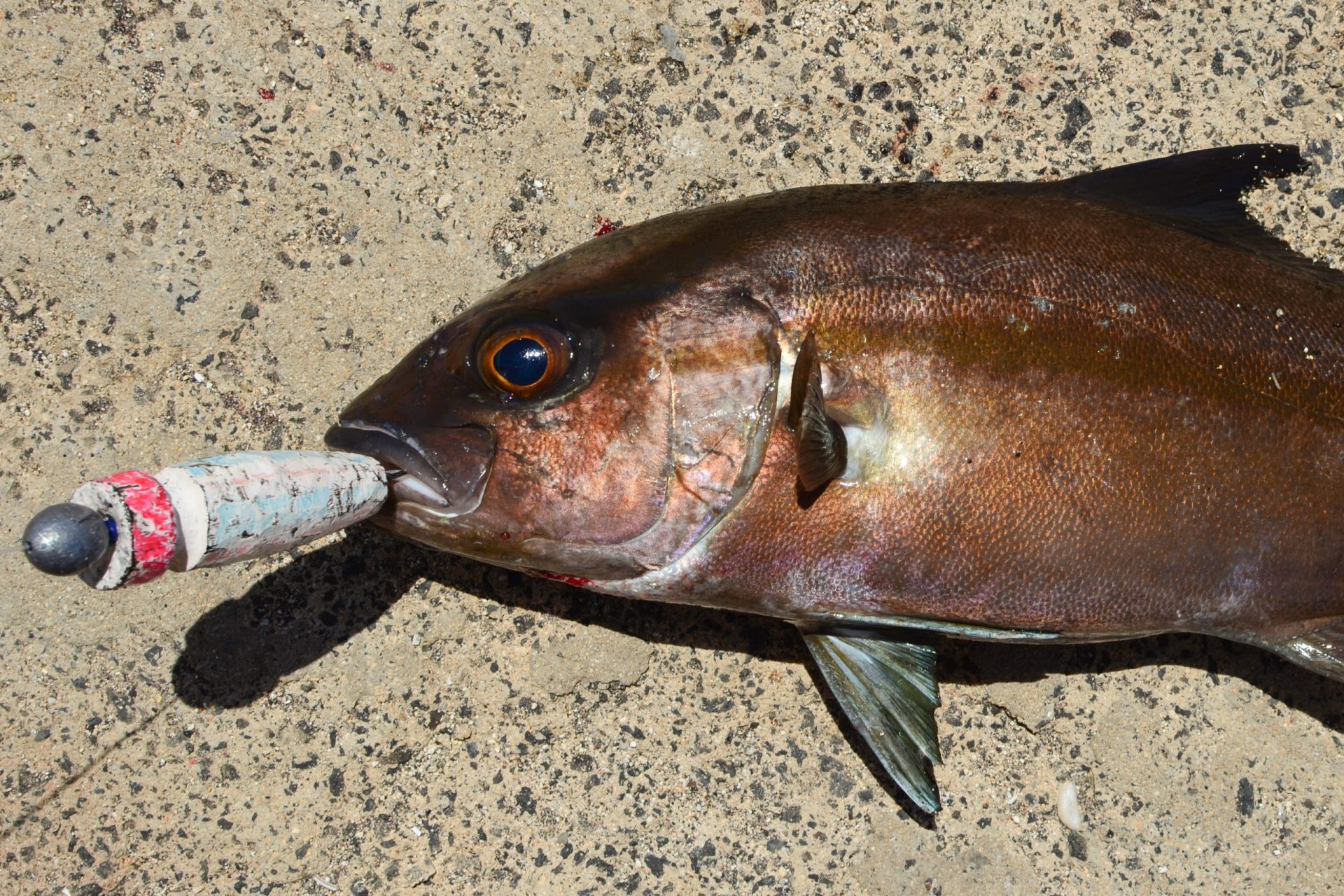 The water is crystal clear and you can cast over sand, shallow reef, or into 300ft of deep blue ocean. The main sport fishing species caught from the shore on lures are atlantic jack, amberjack, almaco jack (a bit like an amberjack but lighter and with a very dark diagonal stripe across the eye), black jack (or black trevally), blue runner (a silver or black bullet-shaped jack), rainbow runner (a spectacularly beautiful fish that reminds me in shape of a large elongated mullet), and grouper. 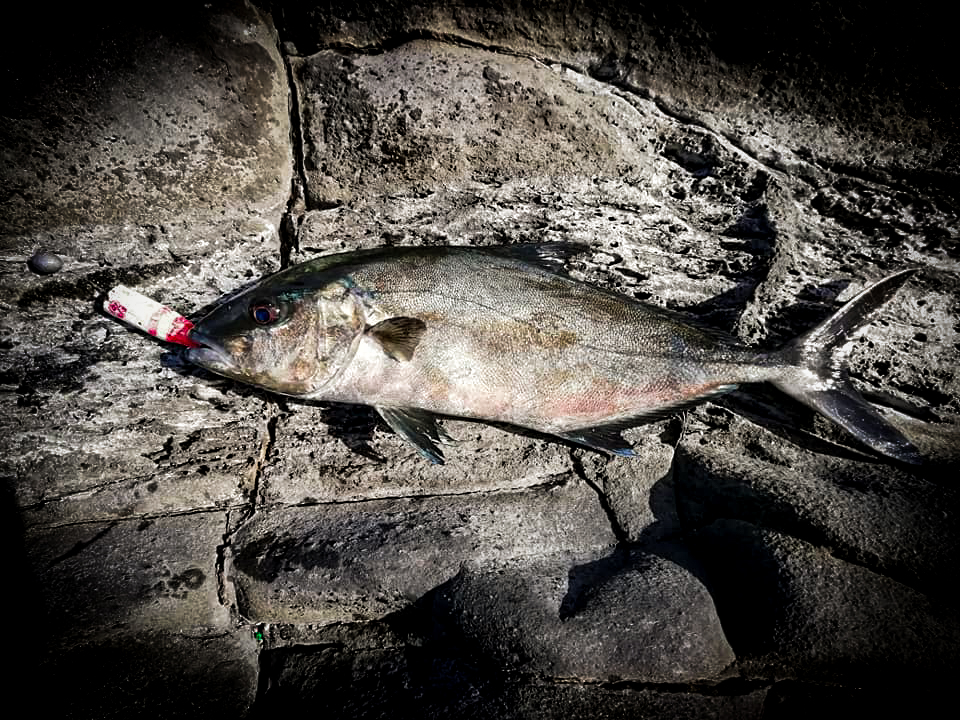 You can also catch yellowfin tuna and the occasional barracuda from the rocks too! The fish fight spectacularly hard and can get big. Very big. Most people spinning from the shore use nothing less than 50lb mainline and traces have to be very heavy. In fact, many people use heavy-gauge, long, wire traces. This is not just because some of the species have sharp teeth but because their flanks and tails can slice through lighter mono as they run and strip line from your reel. Not only are the fish big but they are incredibly fast. If you are spinning with a 10000 size reel with a gear ratio of say, 5:1, then you have to wind as fast as humanly possible and even then it’s often not fast enough. You can understand why I was keen to get a line in the water as soon as possible! 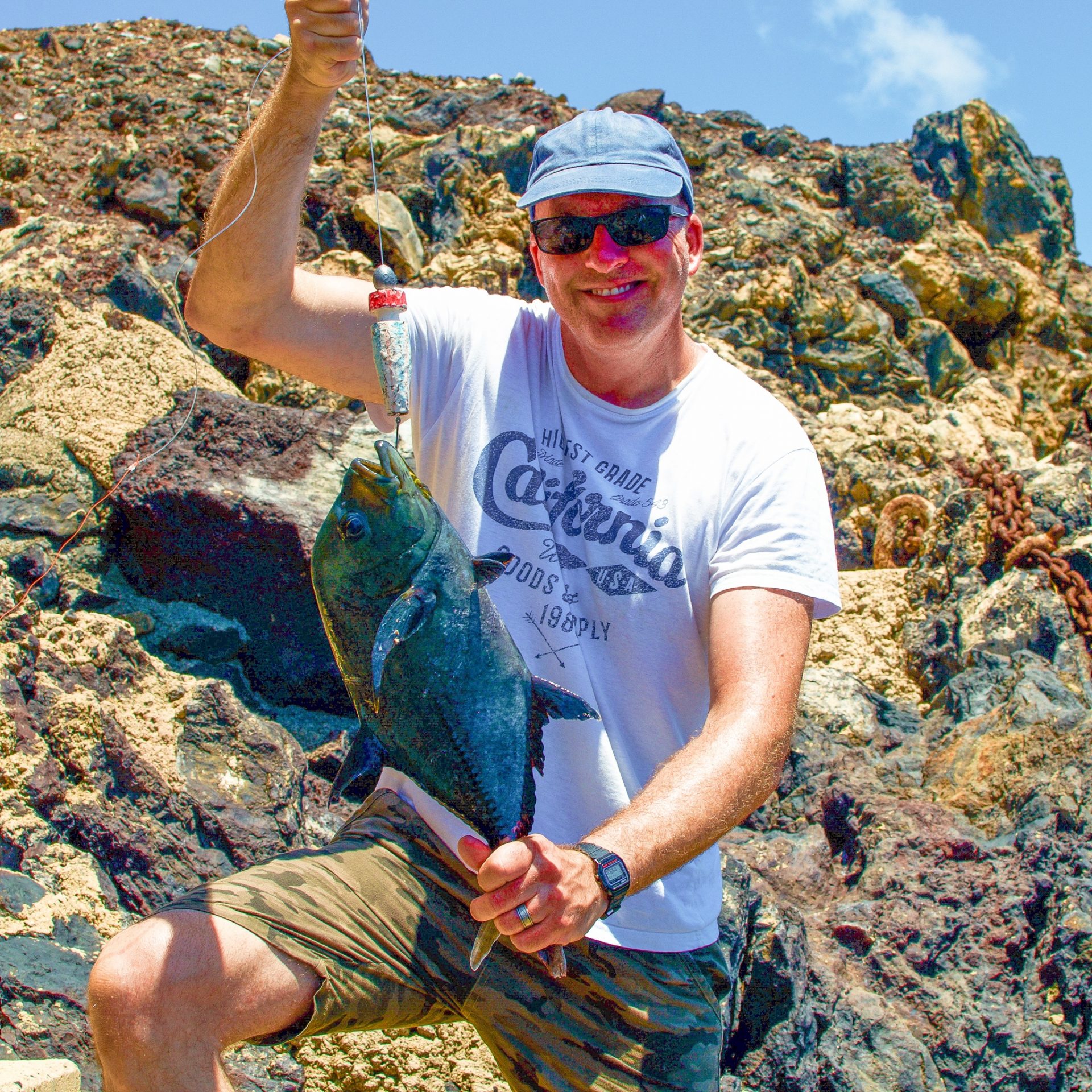 Being an avid angler I managed to track down a rod and reel that I could borrow. A quick word with the friendly base commander and I was allowed to raid the fishing gear in the RAF base stores. The RAF kit was a bit ropey as they too had an order of tackle coming in on the next ship. They had little or no end tackle but I did find one rod and one serviceable reel. The rod was a Sonik Gravity Surf rod and the bashed 10000 size spinning reel was loaded with 50lb mono. It would do and I was now back in the game! One of the local shops, open for a few hours per week, sold packets of hooks, ball weights, and some heavy mono. However, there wasn’t a lure in sight nor any swivels or split rings or anything else! I bought some decent 5/0, 6/0, and 7/0 hooks, some 4oz and 2oz ball weights, and a spool of 100lb+ mono for traces. I then began thinking about how I could make some lures. What I wanted was a surface popper; something I could cast with or without a ball weight, and something I could use with a single hook with no swivels or split rings. In the garage of the house we are renting I found an old curtain pole, a saw, a drill with some bits, and an old tin of white undercoat paint. Cue ‘The A-Team’ music because I had an idea… 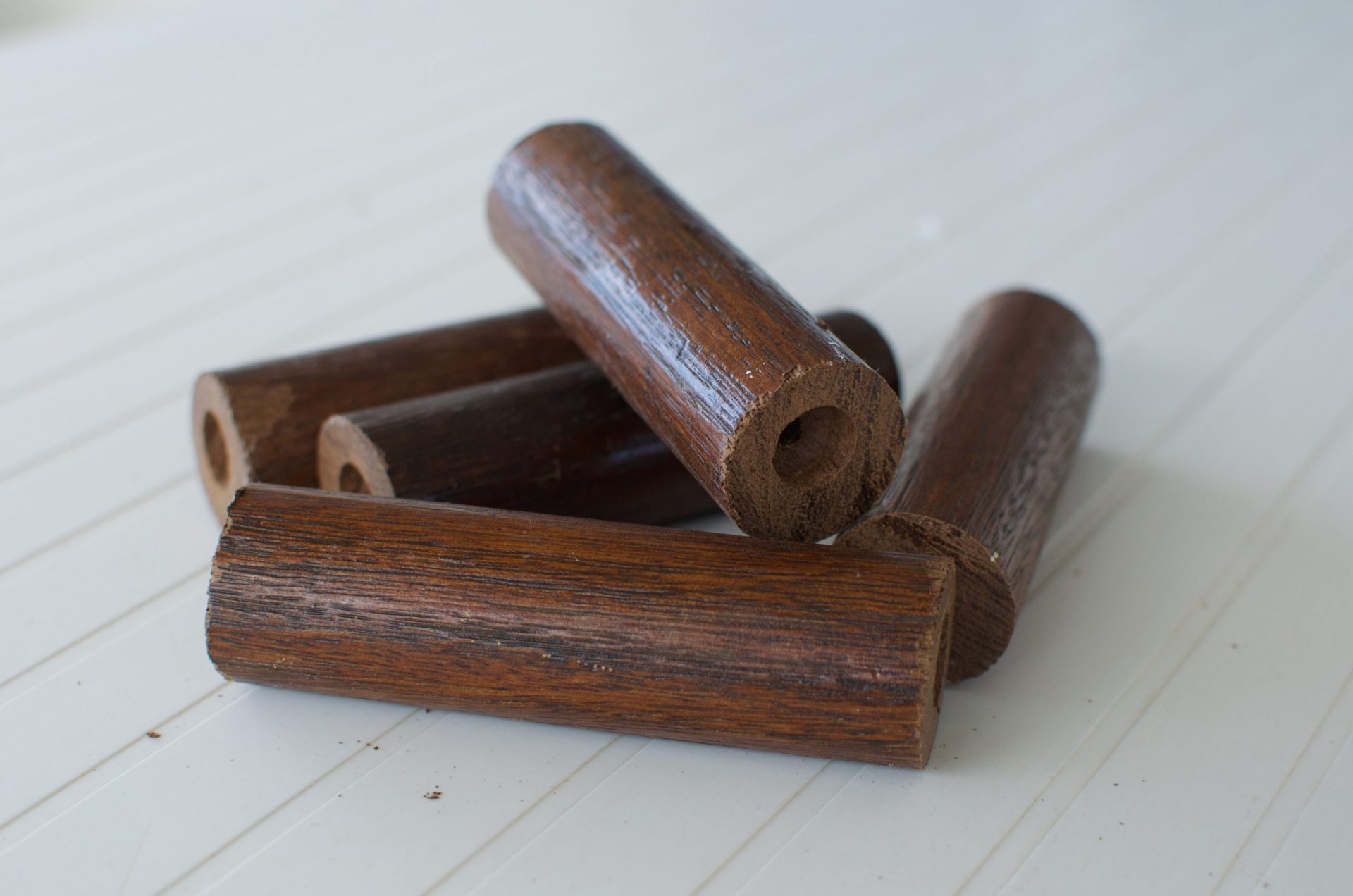 I cut the curtain pole into 4 inch lengths and drilled a hole lengthways through each section. I then used a countersink bit to widen the hole at each end. I sat down with a sharp Stanley knife to scrape away the varnish and whittle one end of each section to narrow it. I then gouged out the front of the section to make it concave. I now had a popper through which I could thread a line. Once I had done this I painted the poppers white and I used some Sharpie pens to add a splash of colour. Genius or madness? I had no idea if they would work. Given that a decent 4-inch popper – one you can land a tuna on – can cost a fair whack of money in the UK, mine cost me nothing other than about 15 minutes of my time. It was time to test them out.

I made my way to a popular rock mark, set up the rod, attached about 1m of the heavy mono to the 50lb mono mainline using a double grinner. I threaded on the home-made popper and tied on a 6/0 hook. I quite liked this set up as it was very simple and I had a direct mainline to hook connection. The popper, being solid hard wood, was heavy enough to cast and I managed to put out a good cast and do a fast retrieve. Immediately there was interest. Brown and grey shapes could be seen homing in on the lure and I felt the hairs on the back of my neck stand on end and the familiar adrenaline rush that we anglers experience when we get that first interest from a fish. The next couple of hours were crazy! I knew jacks fought hard but I had no idea just how hard! I’ve caught pollack from rock marks to nearly double figures but these fish bully and bully and don’t give up. Even when landed they are continually twisting and turning and flipping making them difficult to unhook. I didn’t catch any true monsters but manage to hook and land double-figure amberjack and black jacks. I also caught a rainbow runner, several almaco jacks, two blue runner jacks, and a grouper which I kept for dinner! During one retrieve something the size of a seal launched out of the water after my lure but I didn’t hook it – probably a tuna. I admit that I might have let a wee expletive out when I saw that! After a couple of hours or so of fishing I was exhausted, both from the fast retrieving and the fighting fish, but I proved my poppers work. 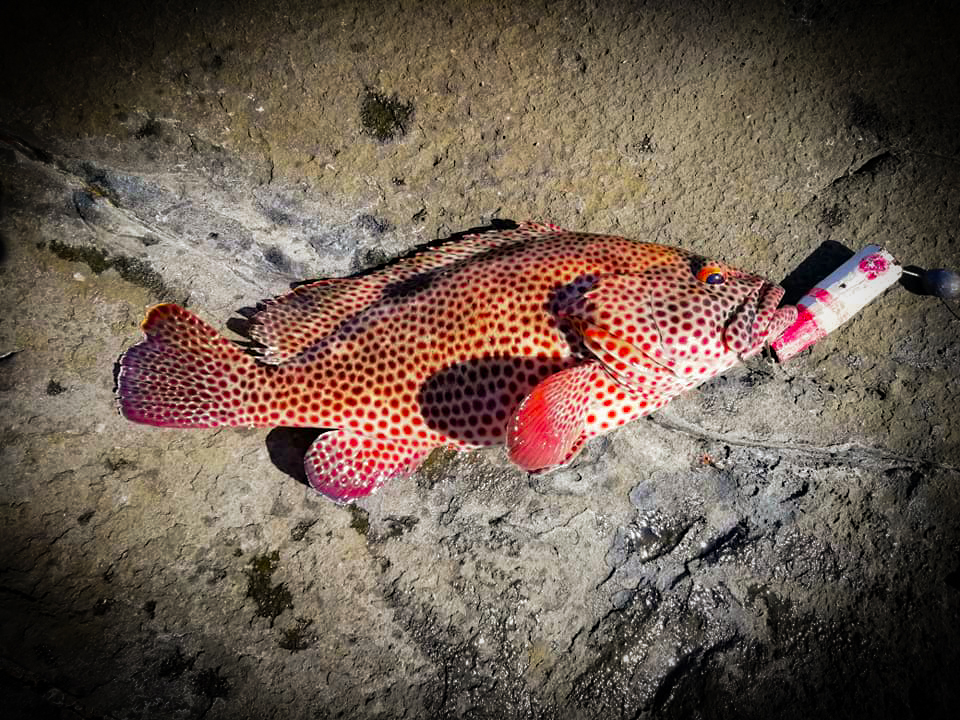 Since that first outing I’ve now been rock fishing a few times, and once or twice with friends. They’ve been using some incredibly expensive looking lures but I’ve stuck with my home-made poppers. My lures might look a bit ‘Heath Robinson’ but they catch fish, and at the end of the day that’s what matters; although I confess that I will be more than happy when those crates arrive in a few weeks time!