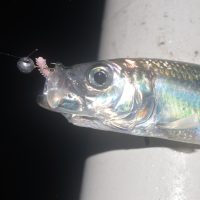 On a blustery and damp Monday night in February, I find myself searching for silver. The ‘Tamar Tarpon’ (I unfortunately can’t take credit for that excellent nickname) aka the Atlantic herring, rumoured to be in the river in huge numbers. An LRF angling opportunity on my doorstep I’d be a fool to miss. Not one to sit bored watching television, I ready the rod and make my way to the river.

I don’t fish the Tamar often enough, it’s the river that divides Devon and Cornwall neatly almost the entirety of the border. The lower reaches and the mouth of this river are only a two minute walk from my house, yet in my own desire for wilder climbs I often ignore it. Not this night though, tonight I’m embracing my local, if not exactly picturesque, fishing marks. 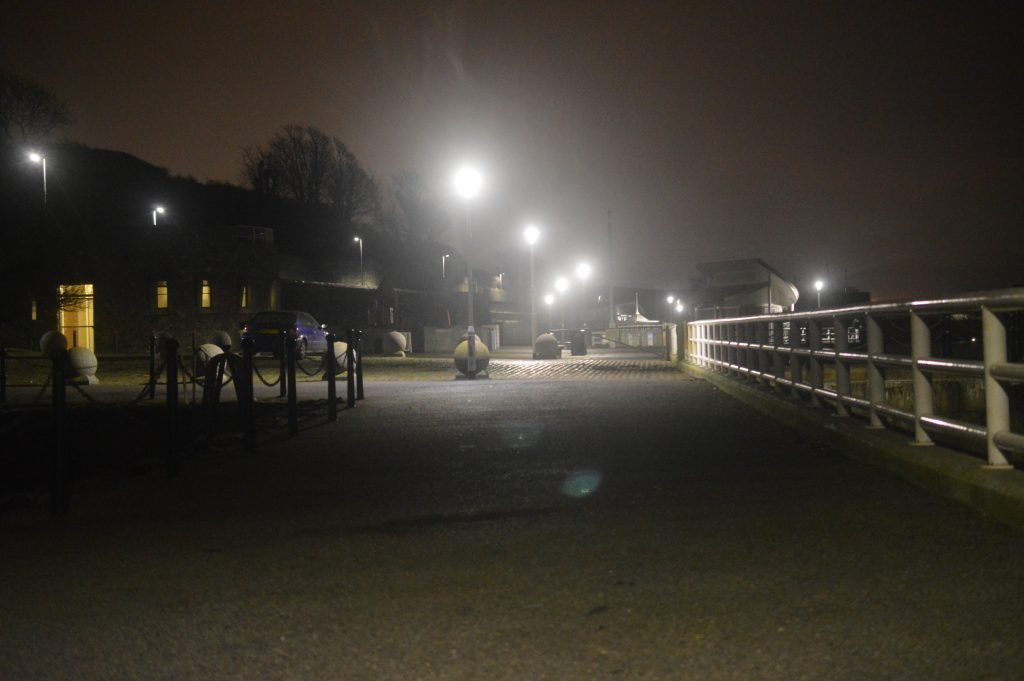 Drizzle, wind and low temperatures, what else could you possibly desire?

The sun is long gone and the only illumination left is the orange glow of streetlights. The cloud is low and reflects the light pollution, almost gives the impression there’s embers burning behind it. I’m at my first mark and it’s as far removed from the more poetically beautiful coastline, only a few miles away, as you can get. North Corner Pontoon in Devonport. It’s grubby, ugly and home to many a rat, but I love it. I caught my first fish here, a tiny ballan wrasse, so I’ll always have a soft spot for it. It’s a popular mark and there are already two anglers bait fishing on the pontoon.

I’m not interested in fishing from the pontoon though, I require a casting point where light hits the water. To the right there is a large accessible ledge with a streetlight beaming onto the surface. I know this to be a fish magnet, any area with artificial light on the water at night, provides a great chance of holding fish. The wind is strong, though not consistent, so I opt for a heavier jighead than I’d ideally like. Three grams might not seem like a lot, but it falls a little too quick through the water column for my liking, but it’s the only way to get the lure out there in this wind so I persevere. I lift the rod tip constantly to slow the fall but I’m cautious not to be too erratic.

Small ‘ballzy worm’ lures bring small plucks and hits but nothing concrete. I switch over to an inch of the ever reliable Power Isome and it brings instant results. I use a slow pulsing retrieve through the artificially lit water and a fish is on. The spirited dive with no real power gives up the perpetrator immediately, a tiny pollack. Quickly I follow it up with two more. The silver fish are eluding me! 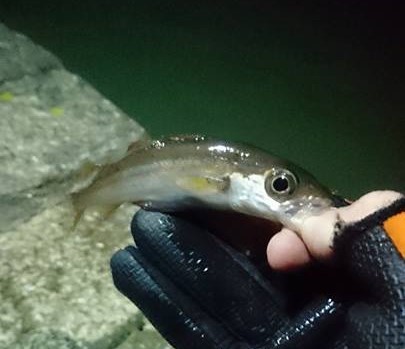 Fishing at night and quality photos do not go hand in hand, but these micro pollack deserve a little limelight, they save many a blank!

It’s very clearly obvious the herring aren’t here so I move on. I head to probably my least favourite mark in Plymouth, Mount Wise. I have no real reason not to like it, the area holds fish and regularly throws up great catches yet I can’t get on with it. It’s a very open and exposed promenade with few obvious features besides streetlights. I suppose it doesn’t help that it holds a greater selection of trolleys and baskets than your average Tesco! It’s these snags that make me thankful I’m using a cheap AGM jighead tonight, I can afford to lose two or three of these. 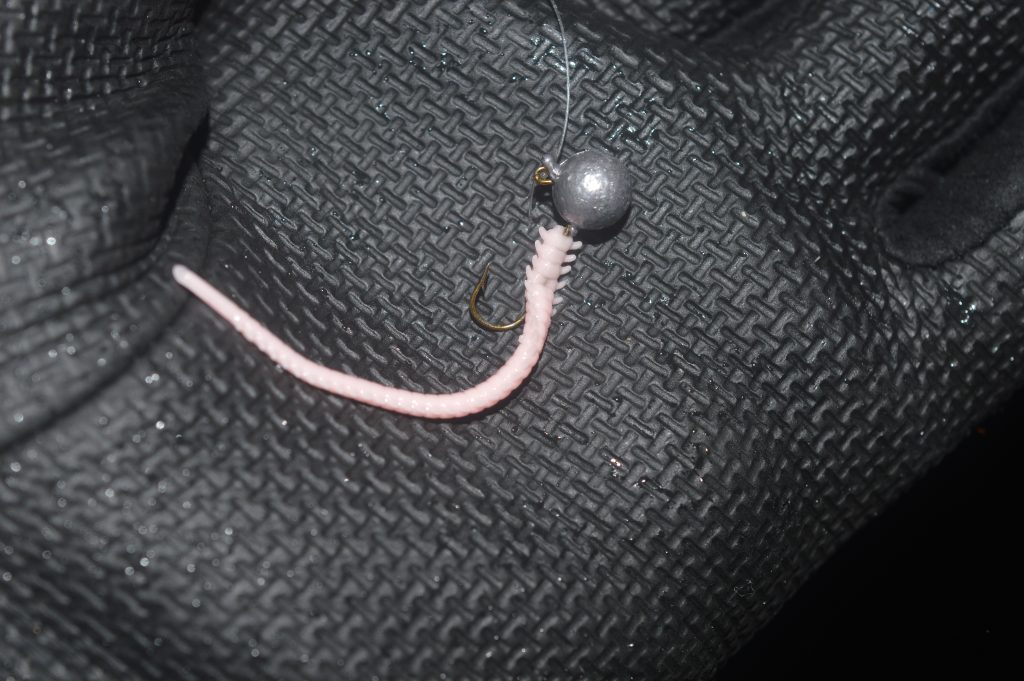 These cheap AGM jigheads are perfect when fishing snaggy areas, combined with a length of Power Isome you will always find fish.

There’s three fishermen bait fishing on the most prominent spot, a small pier that juts out a couple of metres to either side. To the right of me at the end there is an angler fishing LRF under the streetlamp. Unfortunately the spot I wanted to try but alas I’ll try left. I make my casts into the dark, the random gusts of wind blow me off balance. It’s not easy to keep in touch with my lure at times. This is both the frustration and joy of winter LRF, the conditions are awful but the satisfaction when you catch a fish is addictive. I keep casting, trying out different depths but, with only one stray hit to work with, it’s uninspiring stuff!

The three guys fishing on the pier have moved and I’m wasting no time in trying there. The gap between one side of the pier and the inside wall is well lit and calm. If there’s fish anywhere they must be here. I cast out and then twitch it back, keeping it about a metre under the surface. A solid hit! Then another. The hits continue without a hook up right until it’s under the rod tip. I cut down the Isome so it barely extends past the hook and recast. The hit is instant again but this time I connect. The fish feels rather strong and it’s definitely not a pollack. It is a few metres out and is dogged in it’s fight against me. Though not large enough to take line, I’m relieved when I see silver. Unfortunately though, not silver enough to be a herring. I get it on land and it’s revealed to be a sand smelt, a rather large one too. 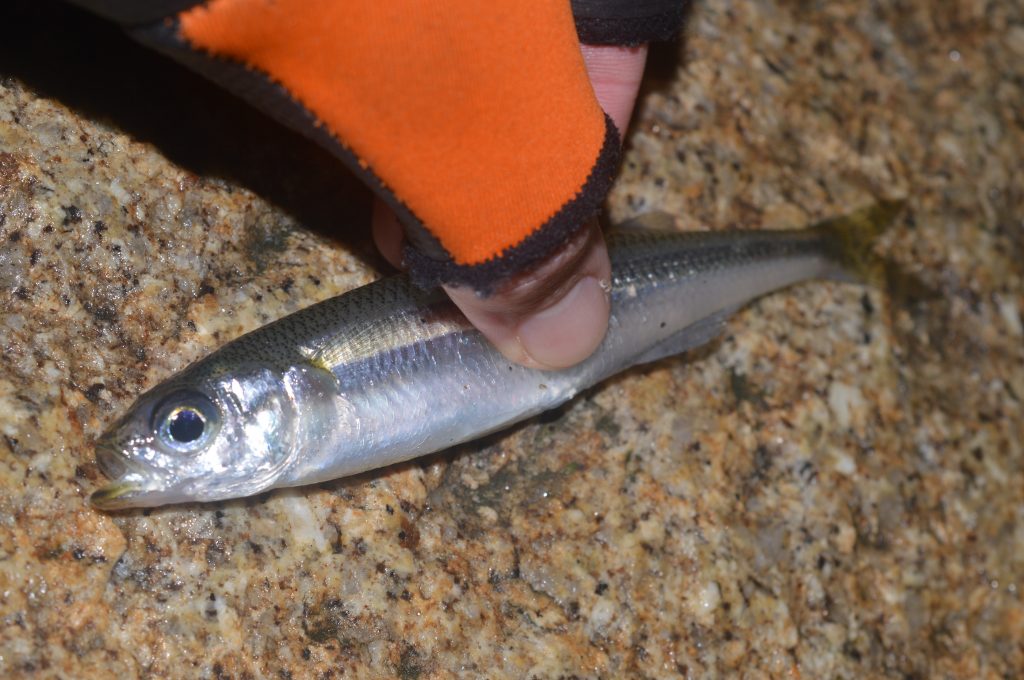 Sand smelt are a small species of pelagic shoaling fish. They are unusual in that they are not particularly slimy and smell rather pleasant. It can only be described as cucumber-like. The one I hold in my hands is certainly the chunkiest I’ve ever caught, though still only about five inches long. I try to contain it’s wriggling for two seconds to take a picture, not easy in the wind and drizzle. After a couple of satisfactory photos it is returned to swim again.

I really want a herring now and subsequent casts have brought me only more smelt. As lovely as they are I want a real pull on the rod, something that right now only a herring or a bass is going to provide. The LRF’er on the end looks like he’s packing up, so I figure he’s worth chatting to, perhaps he’s had more luck with the herring than I. I walk over and on the floor in a plastic bag is my answer, it’s full of herring (and a little annoyingly, an undersize pollack, but I’m not in the mood to pick a fight). The chap is leaving but says there’s plenty of herring here still, which is music to my silver deprived ears.

The streetlight beams directly onto the water here and you can occasionally see fish flashing under the surface. I put on a slightly longer piece of Isome and cast out just beyond the light. I twitch it back for immediate results. A real pull back, then another, then I strike and connect. This fish is no smelt! It’s turbo-charged and takes line handsomely then shakes the hook. This happens again twice. The fourth fish is truly on and I yank it in just so I can see it. 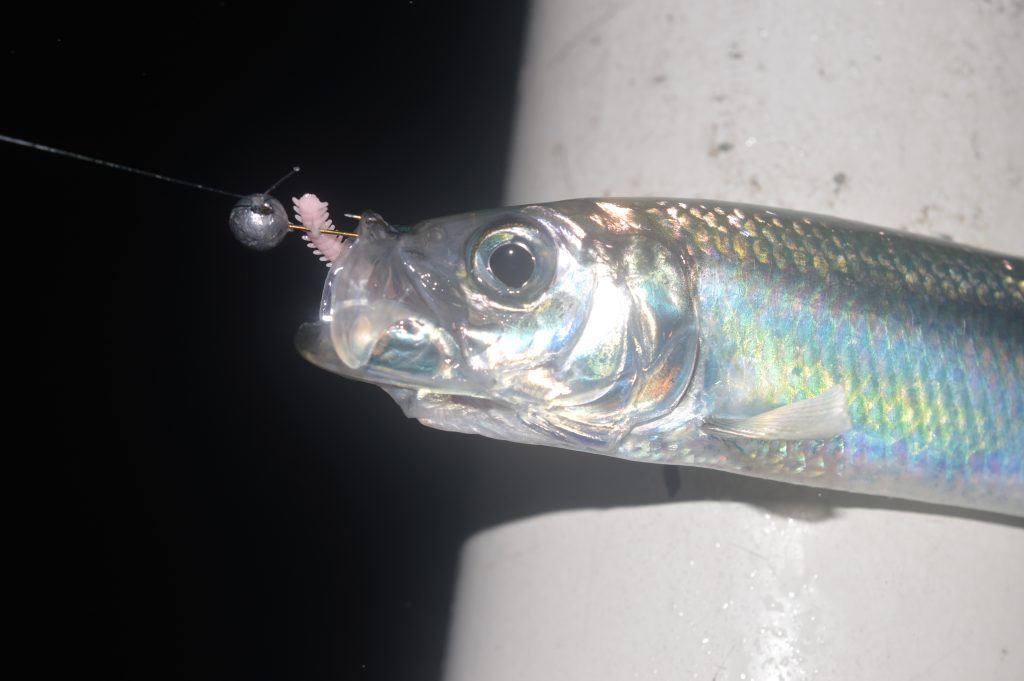 The ‘Tamar Tarpon’ in all it’s iridescent glory, those silver scales reflecting blues, pinks and lilacs at me. A true disco ball of a fish. Their mouth is incredibly thin and it’s easy to see how the hook pulls out so often. Trying to take pictures of such a lively fish, whilst also trying not to shake any of it’s scales off is a test. Their beautiful large scales seem to be held on by a thread, they lose them so easy and I’m careful to minimise touching the fish. Unlike the angler before me I require no food for the pot, just the simple joy of catching such a beautiful thing. I quickly return it. 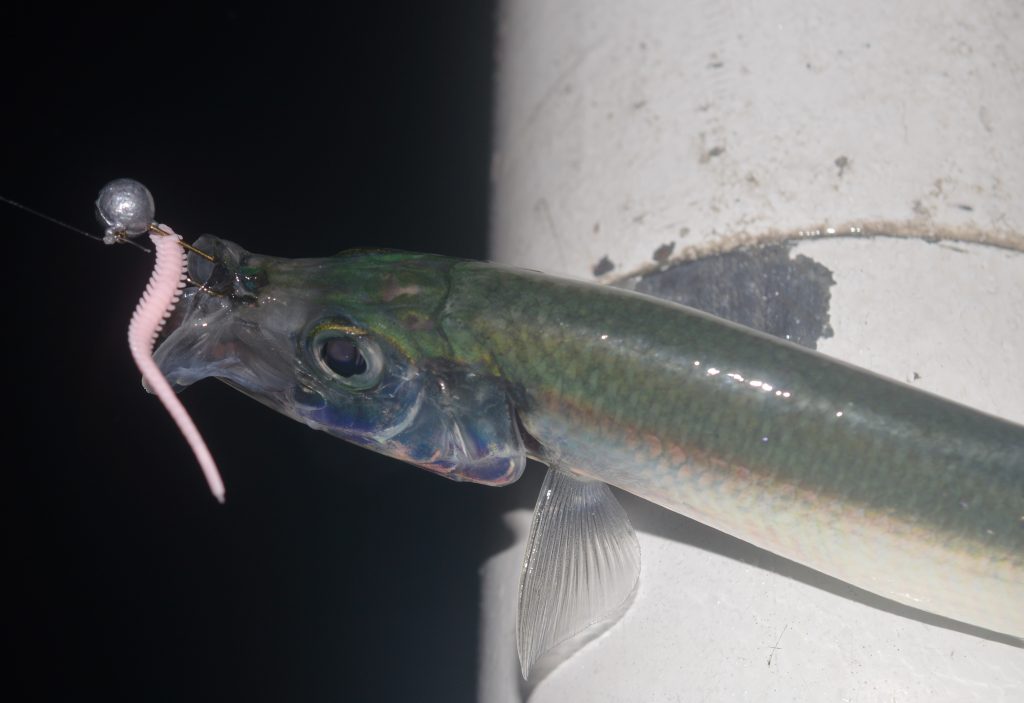 With that tarpon-like mouth and slim, streamlined build, it’s no wonder these fish fight so well.

I’m now hooking fish after fish, a lot are shaking the hook right at the end. This suits me as I’m only here for the fight. With the drag set light the herring rocket off! Some go deep and fight like a scad, others do their best impression of a garfish and leap from the water. In difficult wind and a constant drizzle, it’s a relief to find such electric sport. I milk each fight and there are many, I lose count but it’s easily over twenty in only fifteen minutes. Only mackerel can rival this species for sheer numbers, greed and outright speed!

With a massive smile on my face I head home, my lust for silver abated. As I drive home I see the flickering of televisions on curtains, I imagine the people inside, warm but numbingly watching television. I’m chilled to the bone and smell of herring, but I know who had the more memorable of nights.

If you enjoyed this post then take a look at my blog.

You can also find me on Facebook here. Feel free to contact me if you would like any advice or if you just want to talk fishing.

SUBSCRIBE
A rough weekend ahead Scratching in the surf