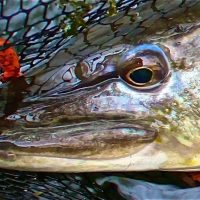 Chalkstream Pike on the Fly

I am sitting by a tranquil chalkstream.  Later she meanders through clay farmland but here her emerald pools are placid and deep. This water is rich and clear and the electric flash of a kingfisher scatters some tiny roach as I string up my eight weight. Not the usual tackle for water such as this but I am here with a challenging quarry in mind. Today my interest lays in the pike that hunt in this little river.

Charles Rangeley-Wilson is right. There is something wonderfully Gothic about catching pike with a fly rod. For me the intimate atmosphere of the chalk stream heightens this sense of drama. The fish here are not generally huge – a ten pounder is a good fish and a twenty a rare monster.. but in this little river the fish seem to take on a scale of their own. And the rare  opportunity to sight fish for pike is just too good to miss. However, during my early visits here I had soon discovered that if I was to be successful I would need to learn some new tricks..

This was my first catch from the chalkstream. She shot from under a moored boat at first light and hit my fly in mid-stream. 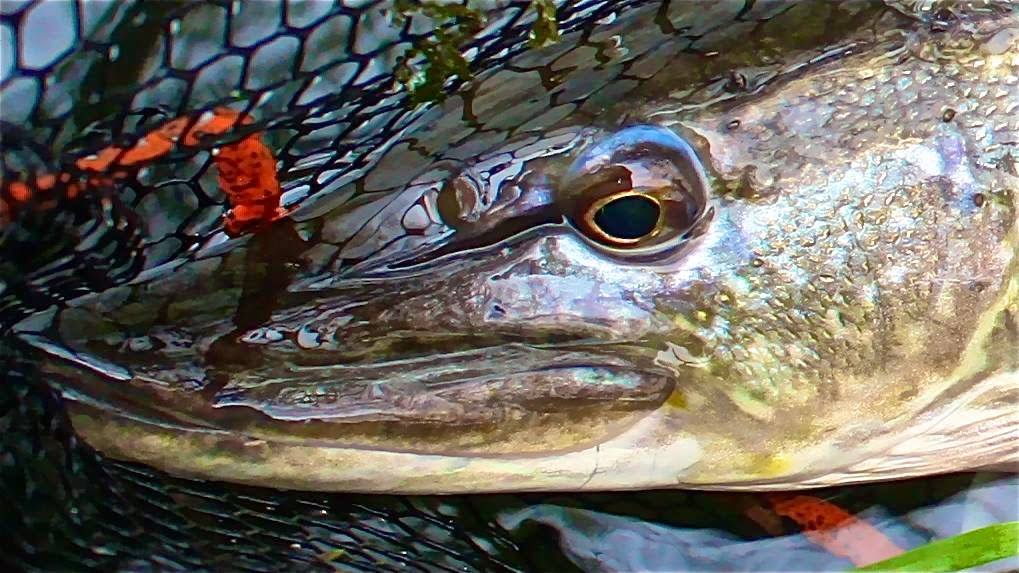 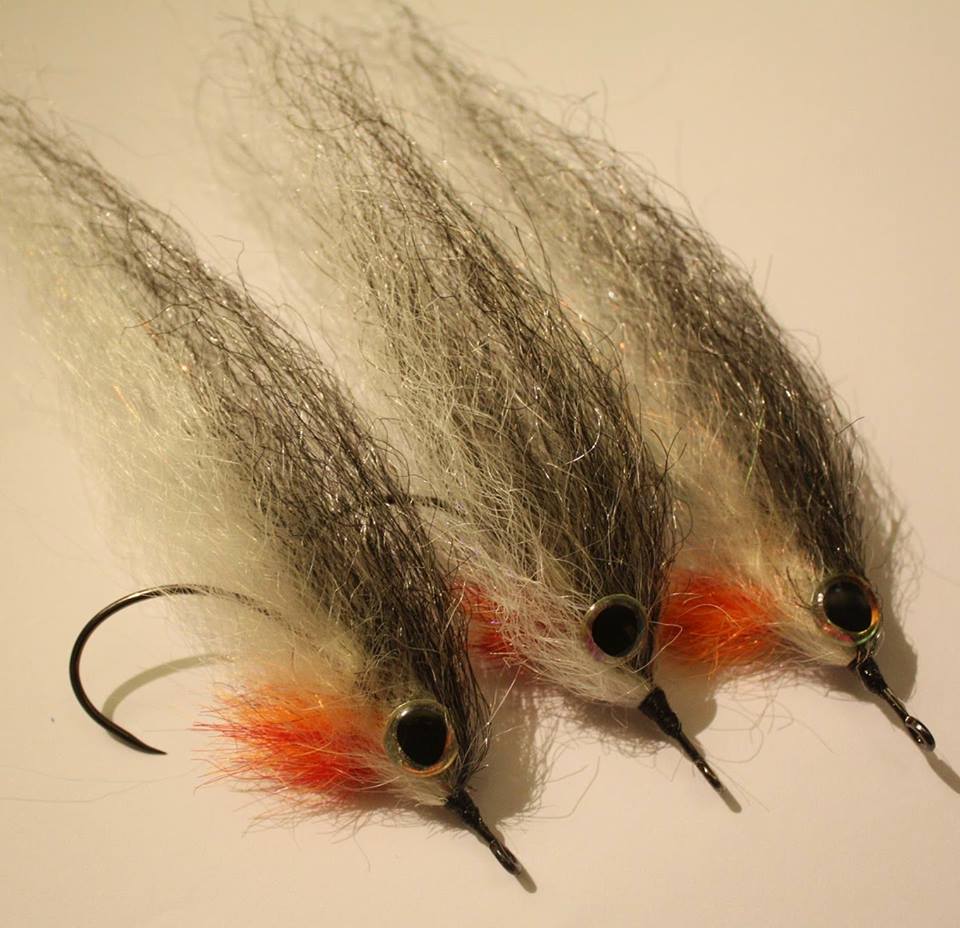 Back at the start of 2014 I had set myself the challenge of catching a river pike on the fly, but the close season was fast approaching. Many rivers were still flooded out and not easily tackled so my chances that season were beginning to look slim. But time spent in reconnaissance is seldom wasted and eventually I discovered this little gem of a water – a small stretch of chalkstream with a good head of pike. Being spring fed and acting as a feeder to a series of ponds this section of river isn’t prone to flooding.. and being a rich nursery for spawning roach it is also a very attractive proposition for pike! 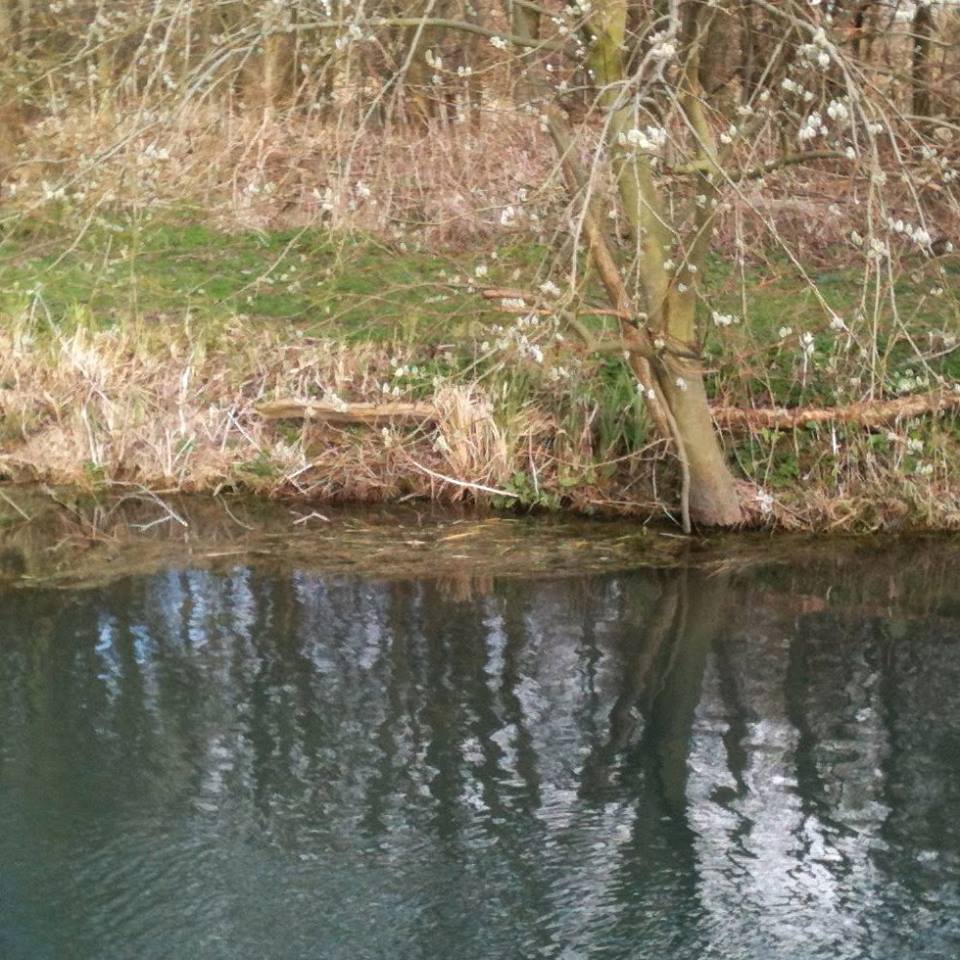 So throughout January and February I enjoyed some fine sport with the pre-spawn pike of the river and learned some new tricks along the way.  I found the pike to be very territorial and came to recognise individual fish and their preferred ambush positions. It seemed that the smaller more aggressive pike would hold tight to structure in the margins and streak out to hammer my fly if I could put it close enough to them. With gin clear water a stealthy approach is needed and by keeping low and away from the edge I could avoid spooking these fish. I worked to perfect a side cast that would drop my streamer under the branches and tight to the weed rafts. I discovered that by overpowering the cast I could steer the fly into position through applying tension with my line hand as the loop unrolled. Now I could plop my fly into all kinds of little nooks on the far bank and a whole new and highly enjoyable dimension to my fishing began to open up.

I also found that the larger pike usually held deep. With sometimes limited options for concealment these bigger fish adopted a hunting strategy of hugging the stream bed and waiting for unsuspecting prey to swim by. I found that a streamer fished extremely slowly and bumped along the bottom was more effective than stripping it back in mid water. Frequently these fish would follow right to the near bank and stop inches from my static fly, reluctant to strike. 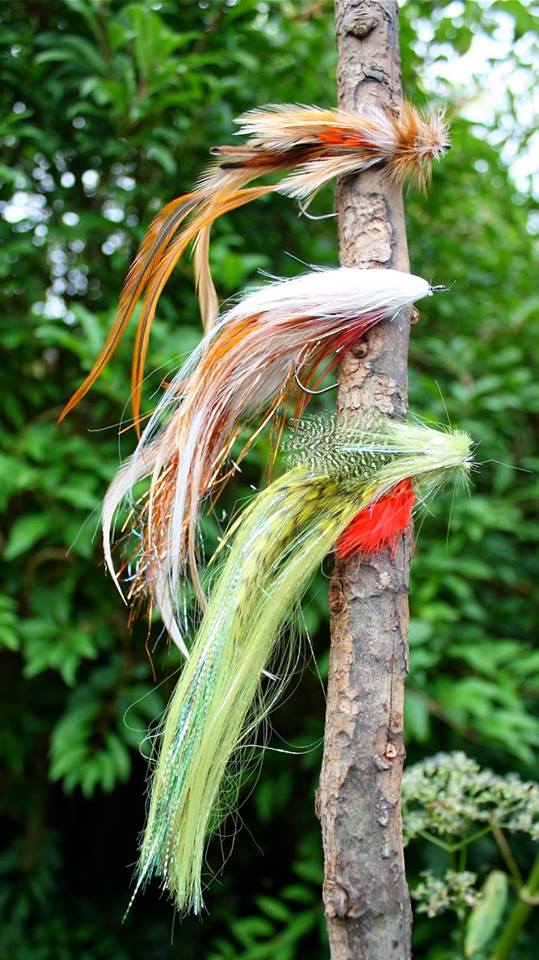 Although contrary to received wisdom, I intuitively felt that the streamers I was using were too big. When I started to use smaller designs with slimmer bodies I enjoyed more success with finicky followers.

I began to tie with hackle feathers to create patterns with very soft mobile tails. These could be fished almost statically with just the tiniest pull on the fly line to make the tail pulse enticingly. Laying in the long grass I played cat and mouse with pike right under my rod tip, waiting for the take from fish so close I could almost reach out and touch them. It was a nervy game to see who would blink first. Sometimes the take never came, sometimes after several minutes of close inspection the pike would sip the fly in so gently that I wondered just how many takes occur undetected and out of sight.. but what followed was invariably explosive as all hell broke loose in the little stream.

As I fished through the season I witnessed some interesting pike behaviour. As I had come to recognise certain individuals I started to notice different characteristics in behaviour from fish to fish. One pike was consistently aggressive in attacking my fly but often missed it in an explosive surface attack – I caught it only once. Another large pike would follow my fly with curiosity but never take. She would ward off the smaller jacks aggressively and prevent them from getting near my streamer but would never strike my fly. Several times I had large pike follow my streamer to the near bank and then sit inches away rhythmically flaring gills and snapping jaws but never striking. But the strangest thing I have experienced here happened when I was bringing my largest capture to the net. I had hooked her in a shady pool and knew instantly that she was a good fish. She held deep and it was some minutes before I could see her. As she materialised, to my surprise she was accompanied closely by another female, larger still. Her companion was twining sinuously about her, so closely that for a second I couldn’t tell which of the two fish I had hooked.Strange Behaviour

As I drew my pike nearer the other bigger pike melted from view and sank back into the pool. I have my own theory to explain this behaviour which is more emotional than scientific, but I will leave you to draw your own conclusions..

I have fished this little spot every month of the river season this past year and couldn’t resist a last visit. As I make my first cast and watch my streamer slowly sink I reflect on my good fortune. I have caught some beautiful fish and have been privileged in having the opportunity to observe their behaviour at close quarters. My love and respect for this wonderful predator is all the deeper for it.

I have learned a few things that have surprised me and witnessed events that I have no explanation for. And this is as it should be, because after all, this is the great mystery that is fly fishing for pike. 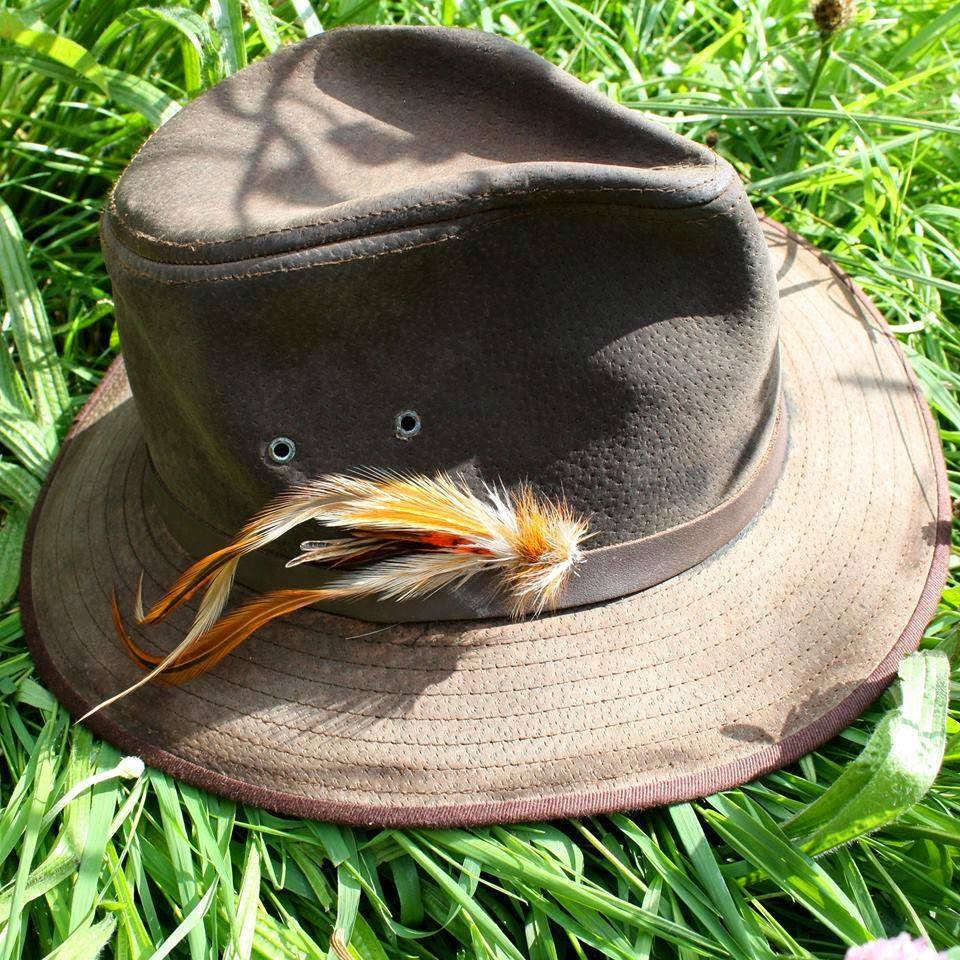 3 Responses to "Chalkstream Pike on the Fly"