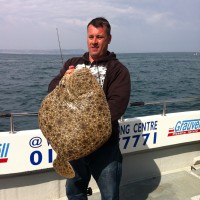 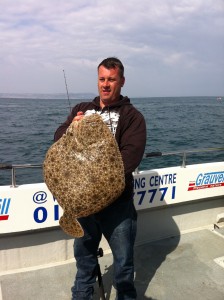 20lb Turbot from Offshore Rebel out of Weymouth

I spent a day out on Paul Whittals Offshore Rebel yesterday, targeting Plaice and Turbot on the Shambles Bank.

Straight from the off we had some very nice Plaice. The really interesting point was that most of them came on raw king prawns. When Paul told me the day before to bring some as bait I had to check that it was not April the 1st.  But it certainly woked very well especialy for the larger specimens. Our best of the day was 6lb and that took a ragworm prawn cocktail.

As the tide picked up we switched to larger baits to try and tempt out a Turbot or two. Myself and most of the other anglers on the boat opted for thin strips of Mackerel belly. However one angler Ian, had been fishing on a few Turbot trips recently claimed that Mackerel flapper was doing the business and that was what he opted for.  Turns out it was the right choice, as he hooked 2 small Turbot on consecutive drifts. The rest of us switched over to flappers and we all had success.

Ian ended up with a cracking Turbot of 20lb. Most of the others managed to get a double figure fish.

We were not alone in our success, as we could see all the other boats net a string of good fish. We even had boats from Poole join us.