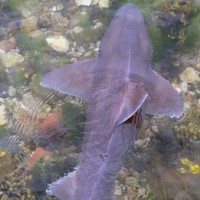 Forget fishing Chesil or the Solent for Smoothound. Just fish the storm drains behind Chesil that run into Portland Harbour.

The heavily pregnant Smoothound became trapped in the storm defence drain near the Sailing academy. Several anglers were een trying to catch it before it was rescued by a team from the Weymouth Sealife centre.

With strong SW winds forecast from mid morning, Chesil beach sounds like it could fish well for Bass later in the day. A short cast of around 15m is all that is needed. Live Peeler Crab, a Whole Calamari Squid, or a nice head and flank of a Mackerel are the best baits.

Fish of the Month: Mays winner was Phil Mathers, with his 7lb 4oz Gurnard. Well done on an exceptional fish. Junes fish of the month is well and truly under way already with several entries. This months prize is a signed copy of Henry Gilbeys Ultimate Fishing Adventures. So keep sending your entries in.

Chesil Beach: Calm . COloured water with a 1m swell that will build to give waves over 3m later in the day.

Portland: 1m swell that will build to at east 2m with coloured water.

Chesil Beach forecast: It is a Bass day today, with the chance of a Ray and Smoothound from the western end of the beach. NIght tides will see Dogfish and Pout. I can’t see there being very many Mackerel around as the conditions get rougher.

Portland: Wrasse fishing will be OK until the swell gets heavier. Once the water gets rough it is time for the Bass and Bull Hus to move in. Lure fishing and bait will work for the Bass, with Mackerel and Squid working for the Bull Huss. There is a chance that Pollock will hang around if the water is not too dirty.

Portland Harbour: It is obviously being visited by Smoothound, so you never know what you might catch on a live Peeler Crab. Flounder, Mullet and Bass are all present.

Weymouth Bay: Stone Pier is a good choice if you don’t want to fish Chesil, with plenty of species variety. Wrasse, Pollock, Pout are all to be caught. I had a report yesterday that there are hundreds of Mullet in the harbour up to 7lb. I am not sure if they are just Thick Lipped.