I am just starting to get a little excited, as I have been closely monitoring the sea water temperature and finally it is starting to rise. It has now reached 6.5 degrees which is still very low, but it has increased by half a degree in 5 days, which for the sea is a large rise in a short period. The South Westerly winds that are due in the next day or so will help push the temperature up further. Surely this will start to bring in some of the species that should be here already. Most important of those species is the Mackerel. They herald the start of the feeding cycle, as they are the indicators that the bait fish are around. Lets hope that we start to see them being caught in decent numbers over the next few weeks.

I don’t know how many of you fished the Flat Fish open last weekend, but if you missed it or fancy fishing another competition then the Chesil Championships might interest you. Fishing will take place this Sunday (14th April 2013) between 11am and 5pm, and signing on is from Freshwater Holiday Park. First prize is £300, for more details have a look at the West Bay angling club website.

Chesil Beach: There is quite a bit of a swell that has built up over night. It is currently running at 2m, so be careful as there are some rouge waves about. The water remains clear down the Portland end, but still a bit coloured at West Bexington.

Chesil Beach forecast: With a bit of a swell running today, there is always a chance of an early Bass very close in. Try using a whole squid or flank of a Mackerel, or even better a live Peeler Crab. There have been more reports of Rays being landed at Abbotsbury. Most of them are Thornbacks. Plaice fishing should be good now, especially with the good sized tides that we have today. Ragworm tipped with Black Lug seems to be a favourite bait.

Portland: With clear waters the Pollock and Wrasse are starting to be caught in reasonable numbers, especially the Pollock. Tonights HW tide is at 8.04pm, making it perfect for a dusk lure fishing session. In the past I have caught some big Garfish from around the crane at the Bill during April. A friend of mine believes that they start to shoal up there before heading off to spawn. It might be worth float fishing small strips of Mackerel close to the surface.

Portland Harbour: I have talked with a few guys that have been fishing around Ferrybridge this week and they have had no success. I am hoping that the Mullet will make an appearance soon.

Boat & Kayak Fishing:  The Weymouth charter fleet are reporting some good catches of Turbot and Plaice from the Shambles. Paul Whittal on Offshore Rebel and Ivan Wellington on Top Cat III, both reported good wreck trips recently. With Cod and double figure Pollock falling to Redgills. Closer inshore and Kayak anglers that ventured down last weekend had a great trip in Portland Harbour. A group of 4 fished Saturday and Sunday, catching Pollock from the Hood entrance and decent Thornback Rays just inside the harbour near the North entrance.

Trout Fishing: One of my aims this year is to do a lot more fly fishing, both for Trout and Salmon. Several of my friends are very good fly fishermen and have promised to help me catch a few more fish this year. I am lucky enough to know John Aplin, who is very well known locally for managing some of the finest chalk stream fishing in the country. He is an extremely good fisherman and a trip out on Sunday proved how good he is, as he managed a lovely early season Brown Trout on a dry fly. 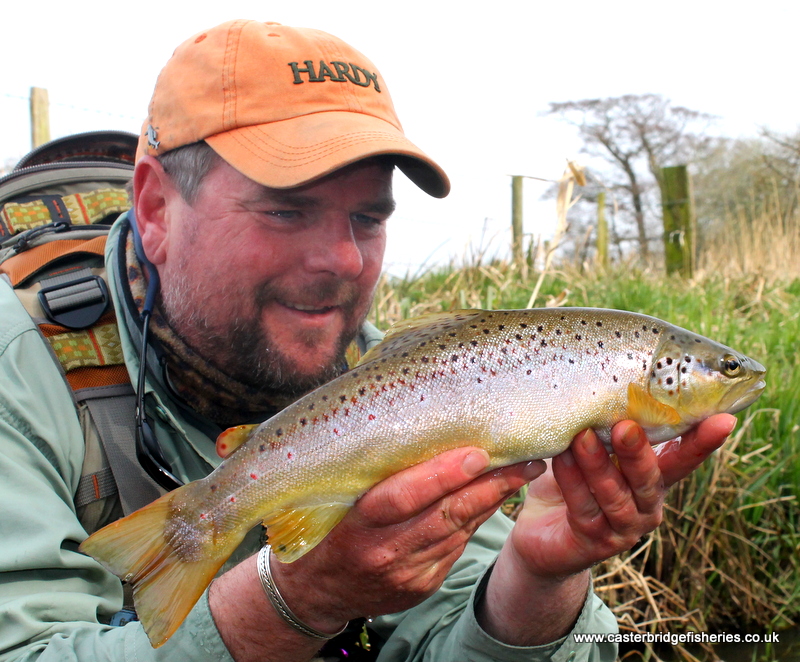 For more information on some of the fishing John can offer have a look at his website River Works.