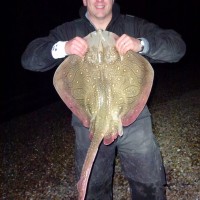 An Easterly wind and a good bit of surf running on Chesil, if it was the summer I would say get out and catch some Bass. It is still worth a go even though the temperature has fallen below that magic 9 degree mark. The Commercial Bass boats are still catching plenty of Bass in the Race and at St Albans Head. The surf will put some food into the water and may draw the odd lurking Cod in close enough to catch one.

Chesil Beach: 8m surf line with 2m waves. The water has a milky tinge to it.

Weymouth Bay: A lot of surf running along the Esplanade and towards Preston Beach.

Chesil Beach forecast: With small tides today your best bet is trying to target a bass in the Surf or head towards Abbotsbury in the search of some Undulates and Dabs. Pout and Dogfish together with a few Whiting will make up the catch during darkness.

Portland: Good conditions for a Wrasse from the East side of the Island. If you don’t mind fishing from heights then Chine would be a good choice. You never know what else you might pick up from these cliff marks, with Rockling and Conger fairly common, especially if you use fish baits.

Portland Harbour: With some surf in the harbour it would be worth having a go with Ragworm for a Bass.

Weymouth Bay: The piers are fishing well for Whiting, both during the day and at night. Plenty of Pout are also being caught with the odd Flounder and Pollock. Preston is good for Flounder and Whiting. It would not surprise me to see some late Bass or an Undulate come from this mark.

Poole Harbour: You still have a few weeks of decent fishing left for Flounder in Poole harbour. Best baits are Peeler Crab if you are feeling flush, or Ragworm. They might not be the most attractive fish, but on light gear they are sporting.

Fish of the month competition: I have one potential sponsor showing interest in supporting this competition, if any others would like to come forward even if it is just to sponsor one month then please contact me.  The competition will be for what myself and the sponsor think is the best fish for that period. It may not be the largest fish, as all factors including location and tackle will be taken into account. The fish must have been caught from the waters of Dorset or Devon and have been caught during the period of the competition. You need to email me a picture and give details of where, when and how it was caught. To ensure your secret spots are kept secret I only need to know the rough location so get sending your pictures in now to fish@fishingtails.co.uk