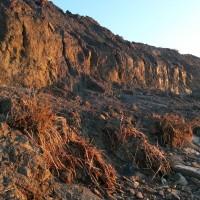 I spent the past two days fishing with not a lot to show for it. Yesterdays boat trip was a disaster. A totally incompetent skipper that spent most of his time in the wheelhouse throwing up put us in danger on more than one occasion. I will be looking for another charter boat before I organise any more trips.

On Tuesday I went out with a couple of friends in search of a late Bass on lures. We had an early start at Bowleaze Cove, one of my favourite marks from last year.

Lure fishing at sunrise on a cold winters day

It soon became obvious where the problem lay. The cliffs around us had slipped into the sea, leaving lots of wet clay exposed to the incoming tide and waves completely colouring the water all around. It was then that we realised we were in a perilous situation.We could see the that cliffs were still sliding around us and huge balls of mud and slabs of rock were still falling into the water. We got out of there pretty quickly. 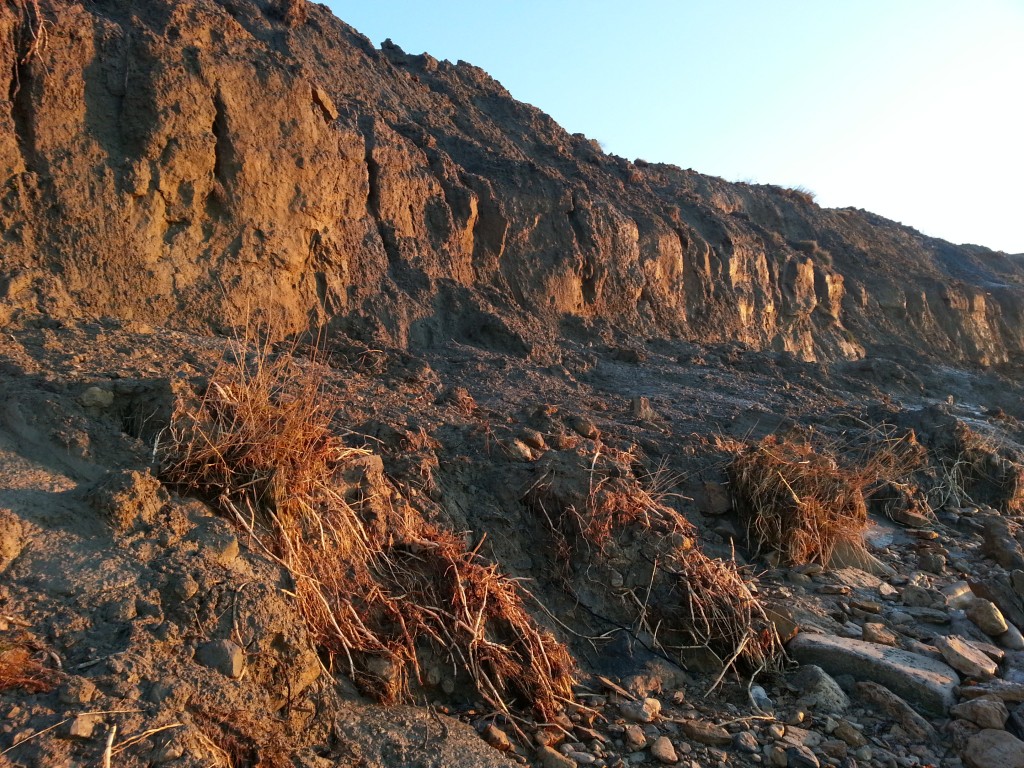 The cliffs have slipped all along the area at Bowleaze Cove

It now looks like this area will be useless for lure fishing for at least a year if not two. As a word of warning, take great care when fishing in areas that have cliffs.

Portland: Calm with a small swell, the water is  lightly coloured.

Chesil Beach forecast: Cold and calm conditions will mean that the main species you are likely to catch today are Whiting, Pout and Dogfish. They have been caught all along the beach in good numbers. I did see a picture on Facebook of a fantastic12lb Undulate Ray caught at West Bexington on a Squid and crab cocktail, by Plymouth based angler Carl McCormack. Unfortunately I was unable to contact Carl to get permission to use his picture.

Portland: There have been some lovely Wrasse, Conger and Bull Huss caught from Portland in the past couple of days. Now the tides are not so strong the fishing on the island should be really good. Pollock have been falling to lures around dusk.

Portland Harbour: It has all gone quite again in the harbour, even though there is lots of evidence of bait fish around. The sudden drop in temperature often puts the Bass off feeding in the harbour, just leaving a few Flounder.

Weymouth Bay: The piers are fishing well for Whiting, both during the day and at night. Plenty of Pout are also being caught with the odd Flounder and Pollock.

Poole Harbour: You still have a few weeks of decent fishing left for Flounder in Poole harbour. Best baits are Peeler Crab if you are feeling flush, or Ragworm. They might not be the most attractive fish, but on light gear they are sporting.

Fish of the month competition: I have one potential sponsor showing interest in supporting this competition, if any others would like to come forward even if it is just to sponsor one month then please contact me.  The competition will be for what myself and the sponsor think is the best fish for that period. It may not be the largest fish, as all factors including location and tackle will be taken into account. The fish must have been caught from the waters of Dorset or Devon and have been caught during the period of the competition. You need to email me a picture and give details of where, when and how it was caught. To ensure your secret spots are kept secret I only need to know the rough location so get sending your pictures in now to fish@fishingtails.co.uk