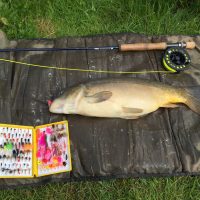 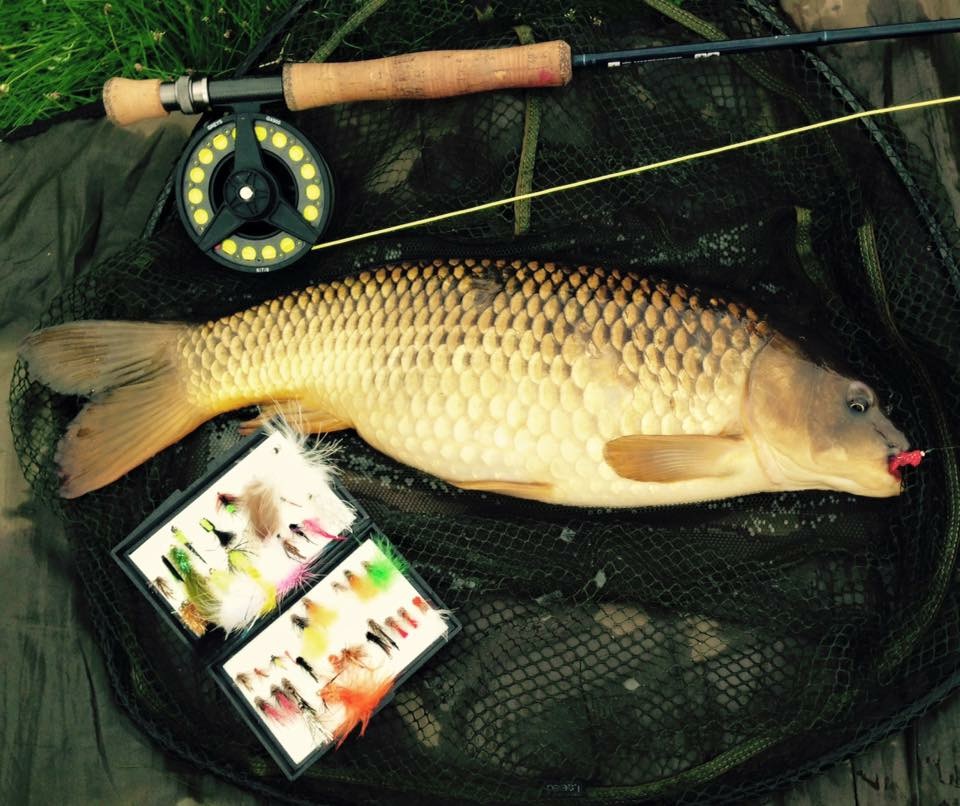 When we think of ‘Fly fishing for Carp’ in the U.K. , we often think – Pellet Flies, G&H Sedge’s and other floating Flies, which can be coloured and fashioned to look like small pieces of Bread or Dog-biscuits.

Now over the years when lure fishing for Pike and Perch using soft plastics, I’ve often had follows from Carp. This usually happens in the months between May and September ( June notably being the best month for follows or signs of interest ). I’ve watched Carp follow twisty tail grubs (which are mounted on small 3gr jig heads) to the bottom of the margin and attempt to suck it up only to spook off when they’ve had a go or mouth at the tail of the lure mid retrieve .

What I had seen and experienced over the years got me thinking and with a bit of research on the internet I stumbled across what Guys in the U.S.A had been doing for Carp. The likes of Barry Reynolds, Jay Zimmerman and many others have been sight fishing for Carp using various fly patterns. Flies tied to look like Goby’s, Crayfish and Shrimps and many other variations of food items that inhabit there waters. 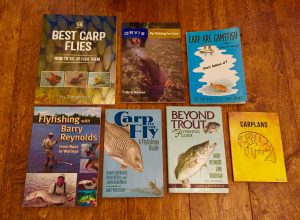 So what if I said Carp can also be caught on lures here in the U.K. !? I use the term ‘LURES’ carefully but I refer to Fly patterns such as ‘ Fritz Goldheads , Blobs and Catswhiskers ‘ and these are well known Trout lures. I started specifically targeting Carp on these types of Lures over 12 months ago, so let me tell you about the day that started it all .

A favourite method of Carp fishing for me has always been stalking and surface fishing – so upon roaving around a local fishery one day I found several groups of Carp cruising just under the surface along with others occasionally rising to sip down whatever was on the top .

I spent the morning trying to get the Carp to take floaters but they just wouldn’t have it. It was one of those warm summers days where the fish were chasing each other and swimming erratically. Now as it happened I had been taking my Fly rod for surface fishing as hooking a Carp on a Fly rod and reel is such good fun, So as I couldn’t get the fish to come to me , I thought I’d go to them ! I had nothing to lose , it was either adapt to the situation or blank and I wasn’t about to give up just yet. 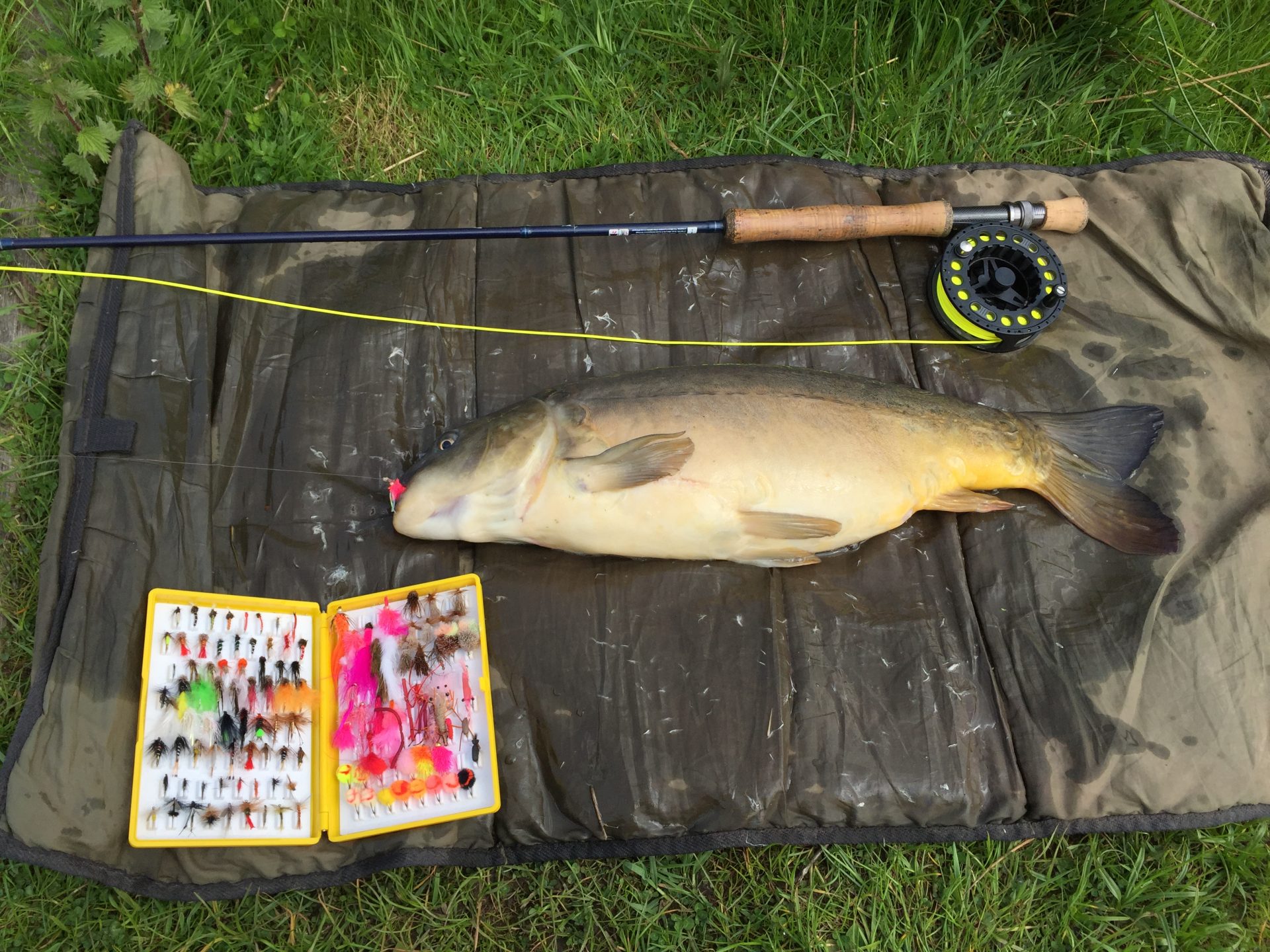 I’ve found Commons usually show more aggression and are willing to take a retrieved Fly more readily, but Mirror Carp can be caught too !

I opened the Fly box and tied on a size 8 Pink Fritz Goldhead,  I wanted something that would be in their face , at their level and hopefully it would be something they couldn’t miss ( note – Pink was a colour I’d had follows on from Carp when using grubs for pike so that gave me something to go off ) . I timed my casts so that the Fly would always be ahead of the Carp as it landed . When the Fly hit the surface I started my retrieve as the Fly slowly began to sink , alternating between short fast pulls and a slow figure of 8, varying my retrieve speed to suit the speed of the fish in front of me at the time . After making lots of casts that afternoon , watching fish follow the Fly on the retrieve only to turn away right at the last minute, a Common Carp nailed the Fly right in the margin .

As I was finishing the retrieve and just about to run out of leader the Carp swimming along the margin to my right suddenly sped up and swam straight for the Fly , It looked aggressive and full of intent – it wanted that Fly . I watched it inhale it before turning away and then bolt off as I set the hook . 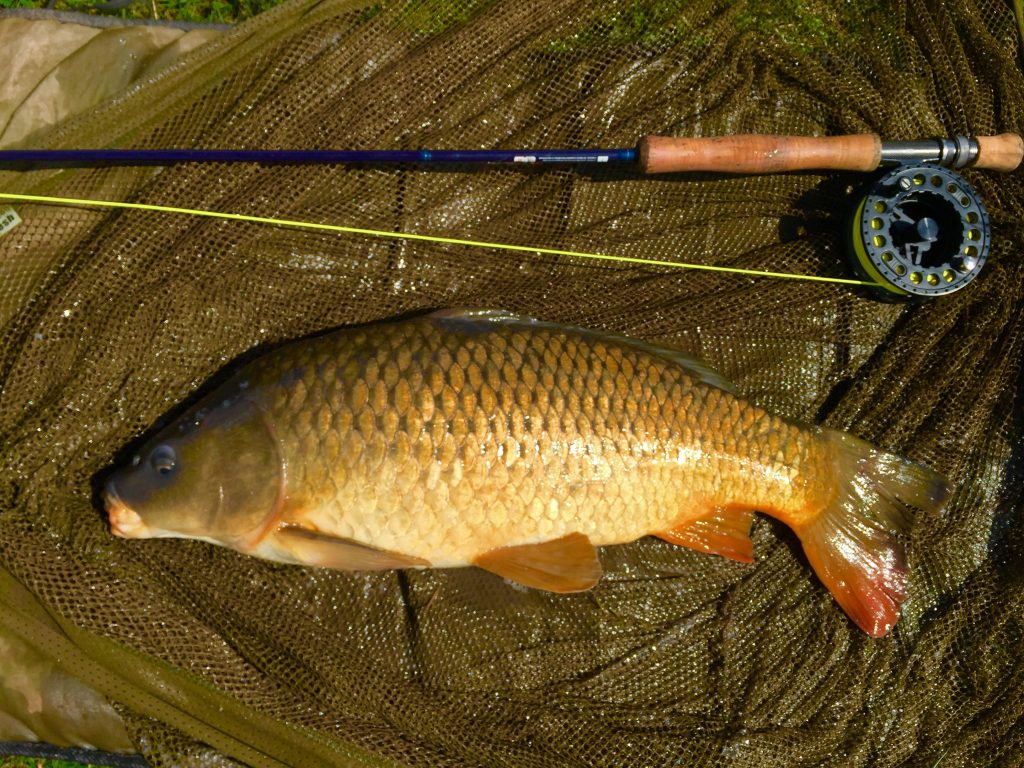 The fight Carp give on a Fly rod is always great fun !

I couldn’t believe it , I’d hooked my first Carp on a retrieved Fly as you would for Trout , Pike or Perch . Luckily for me it stayed on and I netted the Common which was about 7lb. This then gave me confidence to try it again on other sessions and after nearly 12 months of doing it I’m beginning to have some success . There’s plenty of blanks to be had, but I feel it’s very rewarding when you do hook one as it’s such an alternative method .

The gear I use is nothing sophisticated or technical . A 6/7wt fly rod matched with a floating line to suit and a basic Greys reel with plenty of backing on. I tie my Flies directly to 8lb mono varying the B/S to suit the water im fishing at the time and it’s as simple as that .

For me this is a new and exciting way to catch Carp and it’s something I have only just scratched the surface on . My intentions for writing the above is to hopefully provoke people out there, that haven’t done so already, to try this alternative method !

Tight-lines and thanks for reading , Jamie .