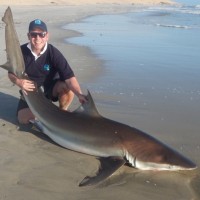 I’m sure like most anglers I’ve got a bucket list of fish I want to catch. For me i’ve always wanted to catch ten species all above the magical 100lb mark. The list so far stands at four which include 360lb Sturgeon, 169lb Wells Catfish, 100lb Stingray & 174lb Common Skate, so six remain and I know which six I want. 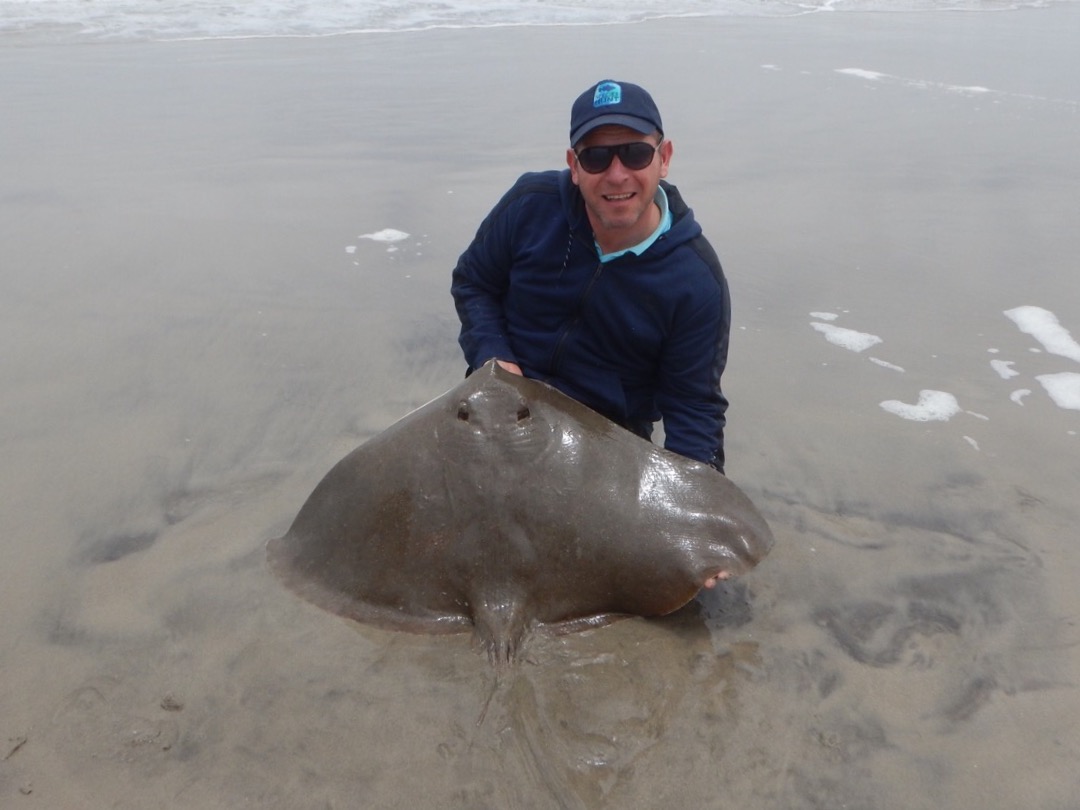 One day I’m flicking through Facebook as I’m sure we all do, when I saw a post from “Sea Ace Fishing Adventures” there was this chap with a big Bronzie on the beach and l knew. So a couple of weeks of messages with Simon McGowan looking at flights etc my mind was made up, I’m going, six weeks later I’m booked on a ten hour flight to Johannesburg with a two flight onto Namibia, sorted. I’m here for 8 days fishing with the sole target of one Bronzie over the 100lb barrier.

On the beach… So to the important info 14ft custom made beachcaster, coupled with Daiwa Saltist 50 loaded with 40lb main line, business end 150lb wire trace with 10/0 pennel rig sunk into big juicy fish bait. Also two other rods out targeting smaller species to keep me occupied until our intended target makes an appearance.

Days 1 & 2 where uneventful two runs that came to nothing, still enjoying it more than l can say, catching plenty of new species on the smaller rods, just being on the beach with  the sunshine, watching flamingo’s & the odd pelican fly by just taking it all in.

Day 3 had been on the beach for few hours when I heard the noise that all anglers love, a screaming ratchet on the Bronzie rod. I ran to the bent over rod lifted it out of the rest, put the rod into my butt pad then I hear Simon “hit it” I strike wind in the slack to keep that all important tight line, then like everybody who has experienced this before and have told me hold on. The first run is long nothing I can do but wait, for the next hour it’s give and take, after being towed down the beach for couple hundred yards and at the  90 minute mark it’s over, my first Bronzie at 156lb , can’t put the feeling of my achievement into words, it may only be an  average catch but for me i’ve ticked another species off over the 100lb barrier. 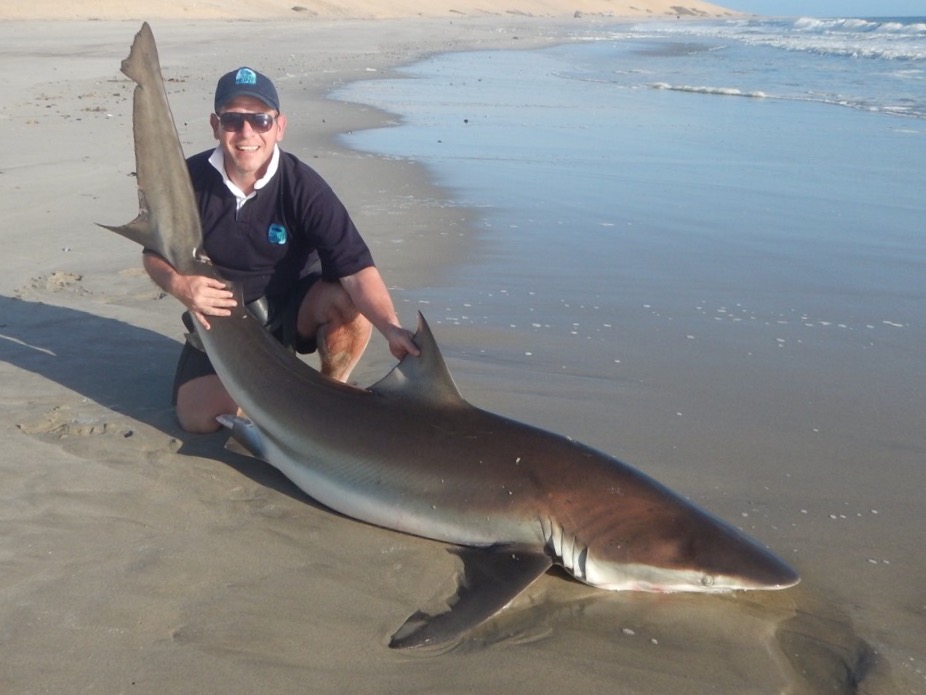 Memorable moments: A couple days later I hooked into a fish that gave me my longest ever scrap. It took 3 hours 55mins to land a female 208lb Bronzie, still can’t tell you why it took so long may be just a stubborn female!!!  Day out on the boat landing 202lb Bronzie, being a boat angler I enjoyed this so much, maybe me wanting easy day after landing them from the beach. 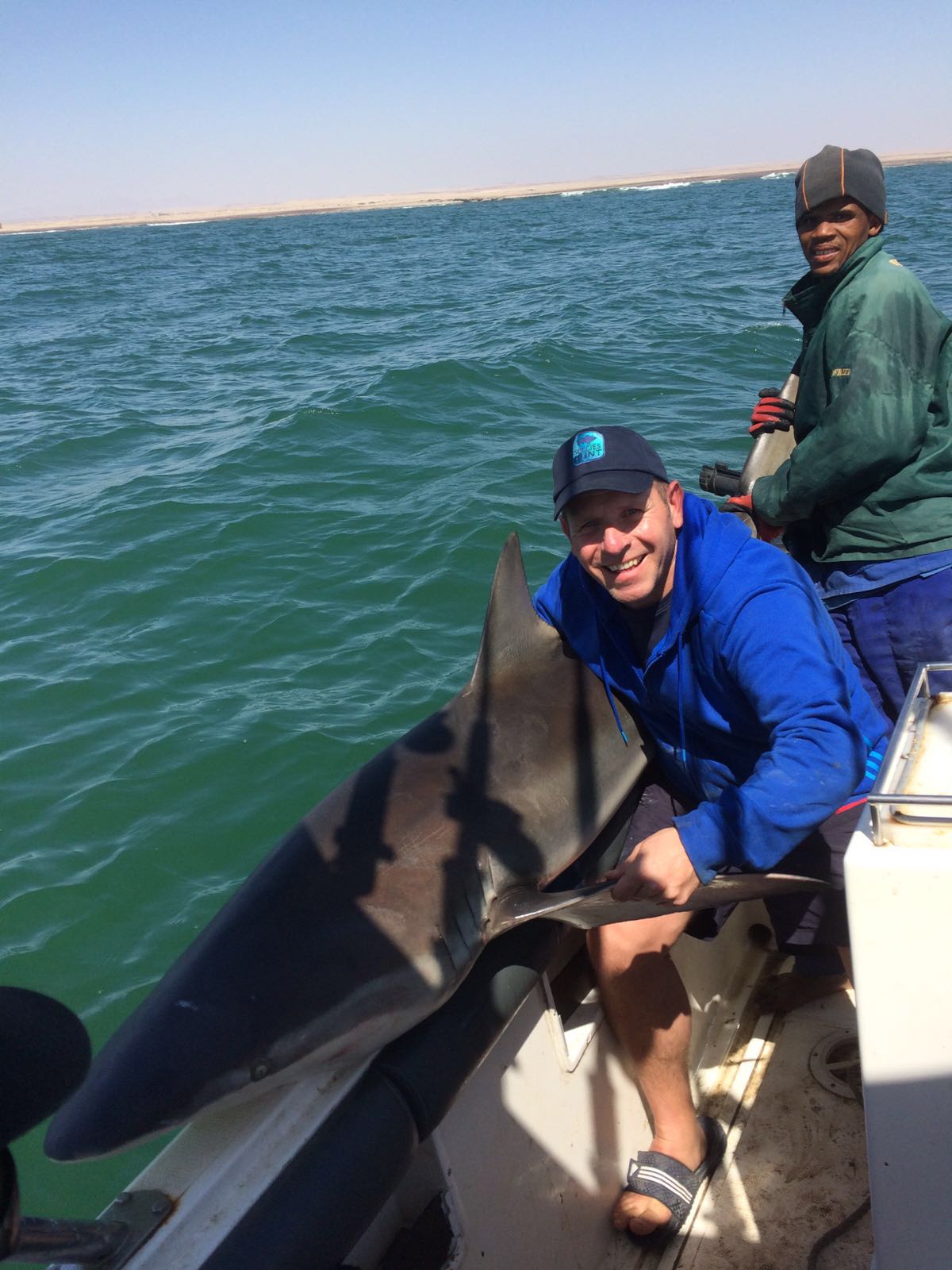 My first male 201lb Bronzie landed from the beach, the highlight for me was it was towards the end of week, picked up few tips by now when to reel like crazy and when to grab rest. Looking back at my weeks fishing 9 Bronzies landed, 11 other species caught on the other rods. Bronze Whaler in my opinion is a fish that doesn’t know how to give in, it’s a battle from start to finish and for all the aches & pains it’s well worth it, I loved it.

Sea Ace Fishing Adventures is owned & run by Simon McGowan who moved over from the UK eleven years ago, you land at the airport and there he is waiting for you. Drive back to guest house run by Simon and his family, wake up to cooked breakfast every day, pack lunch & drinks on the beach all day, after long day fishing,  time for shower before your dinner is waiting for you,  this is all included in the price which isn’t as much as you would think. As a guide we would drive all over to try find the fish, for me the most important part was Simon, who is an angler just like us, he knows his stuff, and in my experience puts you in the right places with the right baits, the rest is up to you.

Truly amazing experience l enjoyed the whole Namibian adventure, you really should try this at least once. Five species down five to go…

All the best, tight lines everybody.