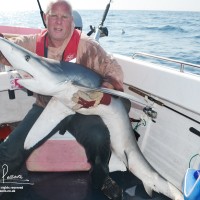 Do you remember the boat scene from Jaws when Chief Brody, Quint and Hooper are out rod and line fishing for the shark and one of the reels clicks slowly for a few turns and then  suddenly screams as line is dragged off it like the rubber burning from the tyres of a donuting boyracer? The zeeez noise of the braid whipping off the Shimano TLD 25 Lever drag multiplier reel took me back to the 8 year old me in 1975 as I watched fascinated at the shark fishing.

In those unenlightened times, the men (yes I know it’s only a film) were out to catch and kill the shark. Today sharks are endangered and anyone who kills one is, in my opinion, a fraction more intelligent than a piece of gum you find on your shoe, but definitely well below the person who spat it out.

Sharks are magnificent creatures and while they instill fear in some, they are a source of fascination and wonder for many, myself included.

As a professional underwater photographer, I have seen my fair share of sharks. I’ve swam with the largest, one of the smallest, the scariest and the most docile. I’ve helped free one from a net and been attacked by the sissiest named (the angel shark). Basically, I love sharks. I love being in the water with them and I also love helping scientists understand more about them. 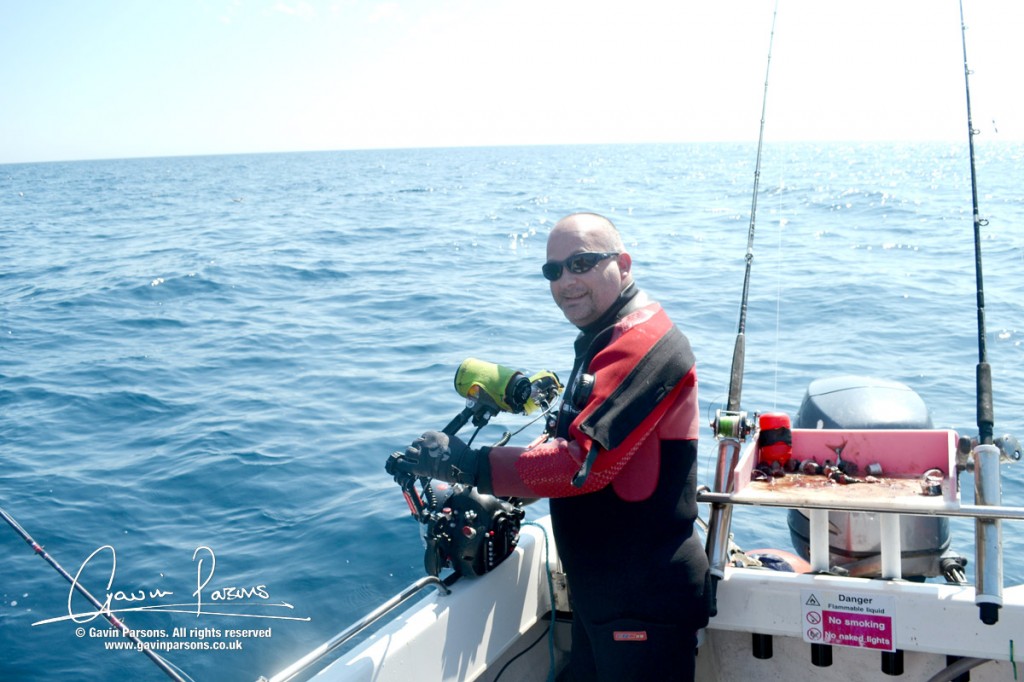 One shark that had eluded me was the blue shark. Known to men in white coats as Prionace glauca, the blue shark is an ocean wanderer. They travel thousands of miles and feed primarily on fish and squid. For divers, the Azores and California are blue shark hotspots, but they are also found off the coast of the south western UK. Cornwall, in fact. Andy Howell, a good friend of mine and owner of Specialised Charters, started blue shark fishing and tagging trips last year and was so successful that he is back again this year and I joined him on one of his first trips of the year to see if the sharks were back. As you can tell they are. 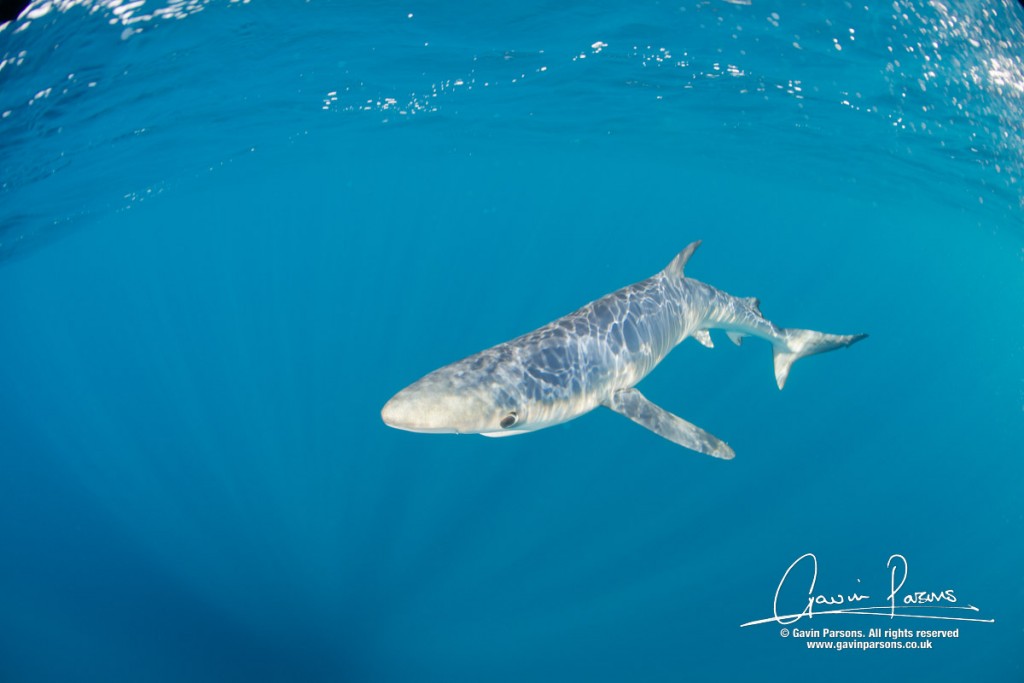 Andy offers catch and release fishing and brings the sharks aboard to measure and tag the sharks. The data is fed back to Dr Ken Collins in Southampton who runs the UK Shark tagging project. Andy pays for the tags, but the excitement and pleasure of catching them more than makes up for the cost. He is also pleased to be a part of helping to monitor the species’ stock levels and contribute to the research.

The system works when the tag is returned. Sadly this is usually when the shark is caught and killed by a commercial fishing boat. Andy has so far, not caught a previously tagged shark. Most are caught in the Atlantic Ocean between 1500 and 2000 nautical miles away from their tagged location. Some travel even further and a few have been caught over 3000 nautical miles away. 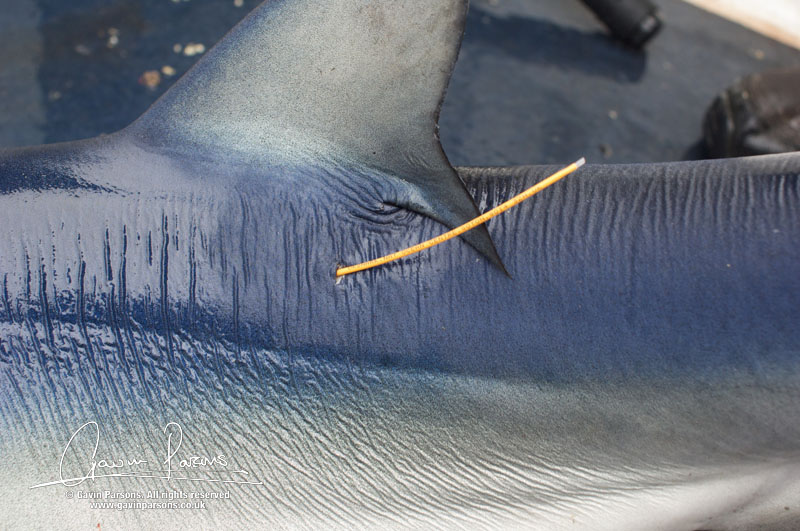 Dr Collins told me this shows the sharks visiting the UK are true ocean wanderers. That statement is backed up by findings made by the Maine Biological Association in Plymouth who satellite tagged several blue sharks and monitored their positions along with longline fishing boats. The two coincided showing the longliners actively target the sharks as they hunt long the dividing lines between cold and warm water. The fishery, unlike tuna and swordfish is unregulated, but should the UK government want to protect the stock it would have to negotiate with the likes of Spain, Portugal, Canada, the US, Brazil, Cape Verde, Gambia, Senegal and any other nation that sends fishing boats into the middle of the Atlantic. It is a list of countries that makes despair strap on a pair of metal toe-capped boots and kick a conservationist in the backside. At present, politically, it is virtually impossible to protect blue sharks in their range. That’s a shame as they are listed as near threatened and are being increasingly targeted by fishing fleets who have slaughtered the majority of the blue fin tuna and swordfish stocks and are turning to sharks to feed the shark fin soup industry in the Far East. 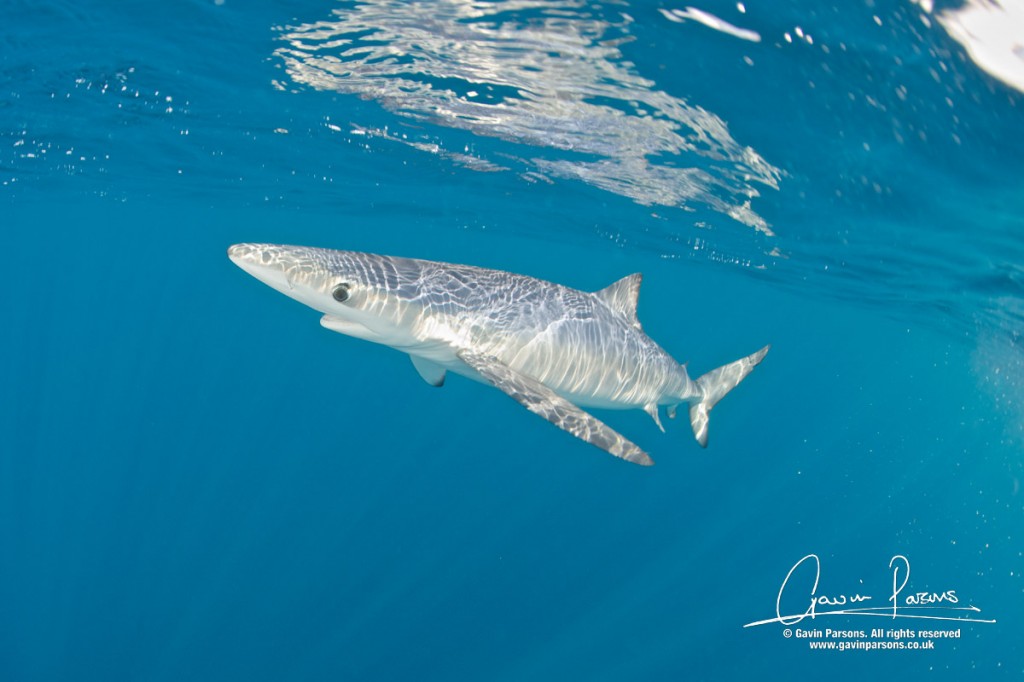 The sharks that do make it to the UK shores arrive when the mackerel start to shoal in June. They follow the current edges which carry the highest concentration of food.

Off some parts of the coast, Blue sharks (and other species) are found miles offshore, but in southern Cornwall, Andy starts less than 10 miles from shore and can be as little of five miles offshore at the end of the drift and still pick up sharks.

The day starts with some light mackerel fishing to gather bait. Then it’s a short run out to the start of the drift and the scent trail is set. The Rubby Dubby scent trail is disgusting to humans, but irresistible to sharks. Imagine a pile of mackerel lying on the beach for three days and you trip and fall into it. That’s what Rubby Dubby smells like. But to a shark it smells like bacon cooking on a Sunday morning. 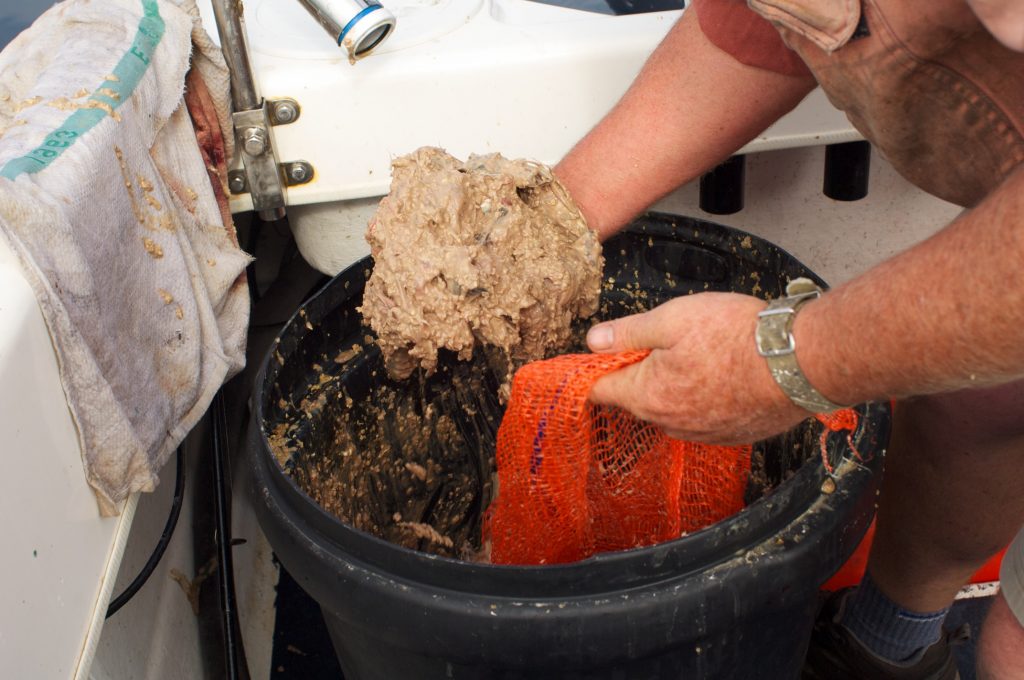 The smell also attracts gulls, fulmars and even storm petrels that hang around right up to the point a shark appears. When the birds take flight, you can bet a shark is close and there will be a bite within five minutes. 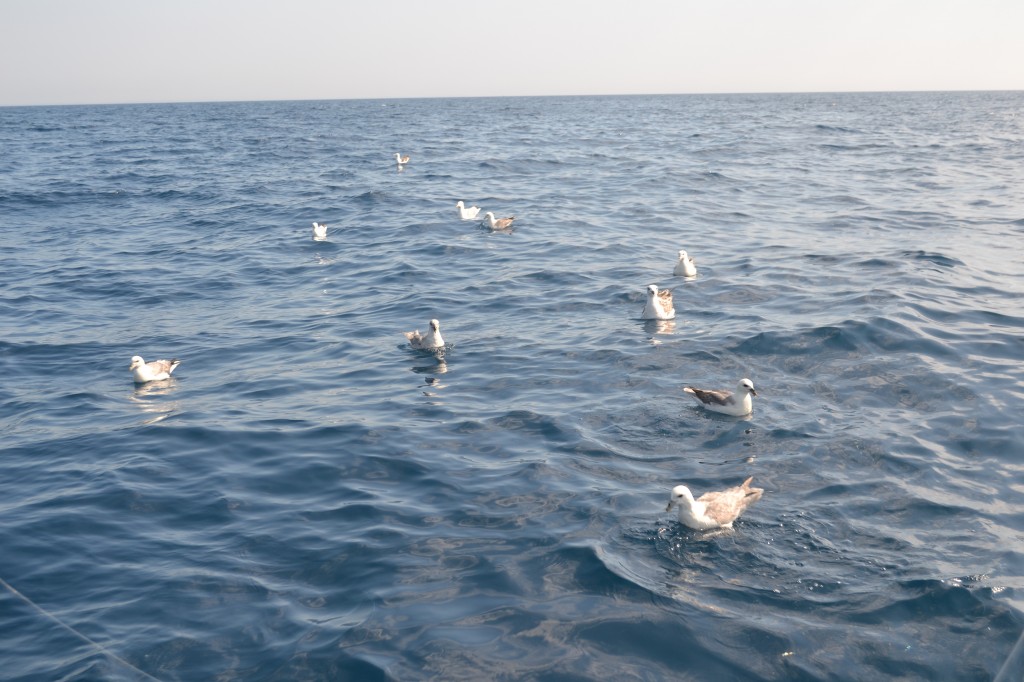 When a shark takes a bait, it grabs the mackerel flapper and often swims like mad. The reel screams as the line is taken. Andy likes to use light gear and is even developing a way to take the sharks on flies. The first shark took the bait on the heaviest rod – a 20-30Lb Shimano travel boat rod with 50lb nylon main line on a Shimano TLD 25 lever drag reel  – which was just as well.

Our plan was for me to hop in the water to film the shark coming aboard, but it had happened so fast I hadn’t had time to get my drysuit on. I hurried into it and flopped into the water like a hippo rolling off a springboard.

As I sorted myself out I glimpsed the shark about 10m below the surface, the water was crystal clear. Andy slowly bought it to the surface, but as it got close it found strength to blast downwards and pulled line with it. As it came up the second time another, smaller, shark joined it and it stayed at the surface.

As Andy’s shark tired he got it to the surface and then it started to roll. This is a dangerous time and I was unable to help. Bobbing at the surface filming with a GoPro I watched as Andy tried to stop the fish severing the line and escaping and grabbed its fin and tail and hauled it aboard. All I saw was Andy disappear below the side of the boat followed by a bloody big shark and I heard a holler. I thought he’d been bitten, but as I climbed aboard I could see he was overjoyed. The shark was almost as large as the boat and once we’d measured its length and girth we used a standard equation to work out it was 118lbs. Andy’s biggest fish. 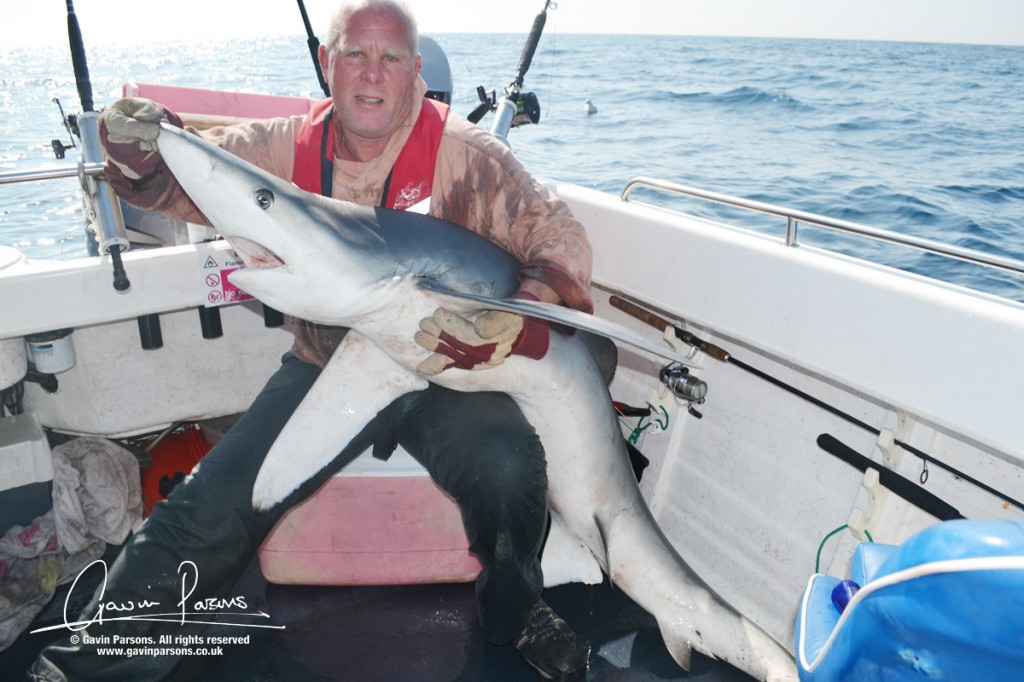 Once tagged, the enormous fish was released and, because the smaller shark was still around the boat I took advantage of its curious nature and photographed it underwater.

We then reset the baits and waited. The gulls and fulmars returned and we settled down to wait for the next shark. It didn’t take long and I thought it was perhaps the small shark I’d photographed taking the bait, but one pull on the Tomaflex Jedi bass rod (16lb) with Abu 10,000 reel and as I pulled back of the line I was convinced it was a much larger fish. For the next 20 minutes I got the shark within sight of the surface, only to have it dive away and take line from me. 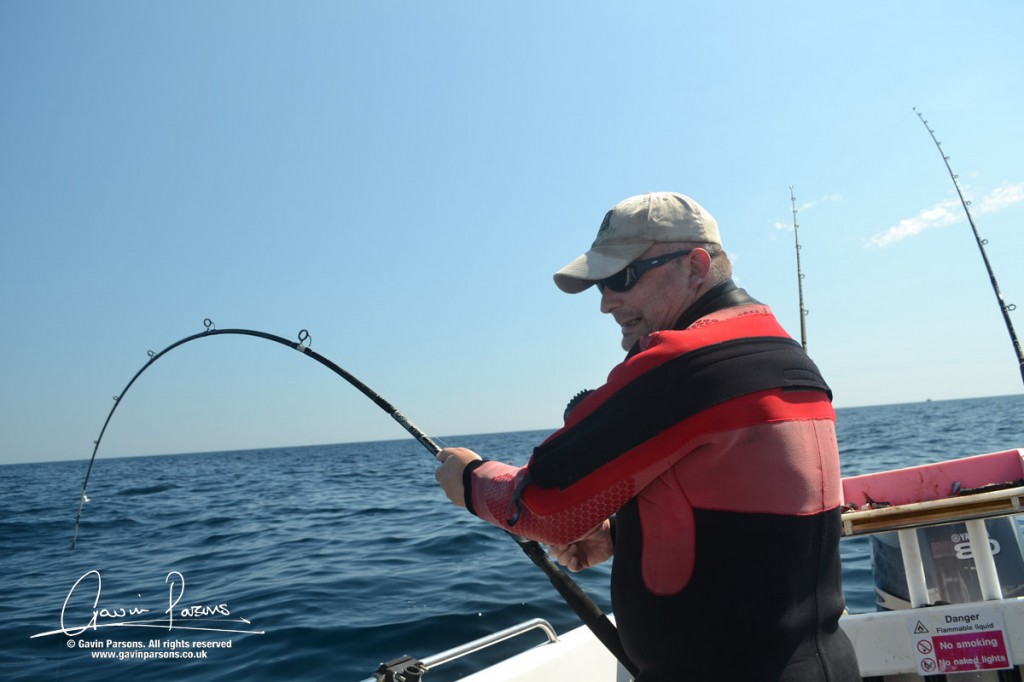 Finally I got to the surface and Andy pulled it aboard and we were confronted with another  female of almost the same size as the first shark. It turned out to be 98lbs.

With it measured and tagged, the shark, which was bigger than I am, was slid over the side and back into the water. I held her tail for a while to ensure she was strong enough to swim unaided although she hadn’t been out of the water long and so she swam off well after less than a minute. 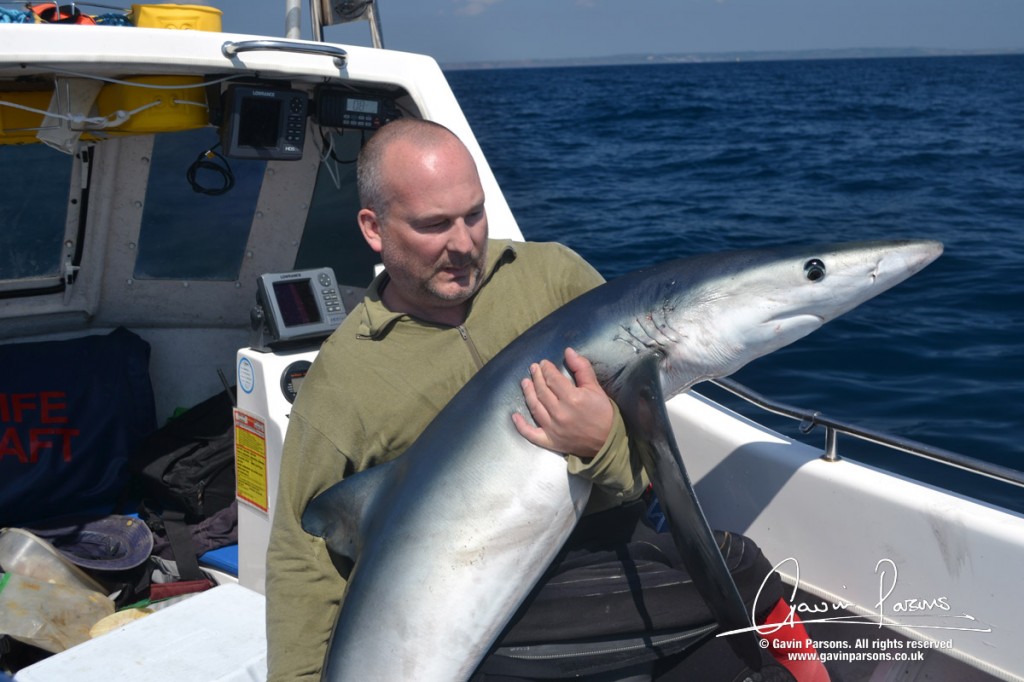 Catching sharks like this is an adrenaline rush. The strength these animals have is incredible. Fighting them on light gear is taxing and a great upper body work out.

The science is valuable, but this is something everyone can do. Specialised Charters runs shark fishing trips like this during the summer whenever the weather is right. Places are limited to two guests per trip, but at £250 for the boat per day, it’s good value for money in my opinion. Especially when you consider the work that goes into finding the sharks, the fuel costs, boat maintenance, the time it takes to prepare the rubby dubby, and the skills learned over many years. This is not an ordinary wreck or reef fishing trip.

One Response to "Blue Shark fishing"