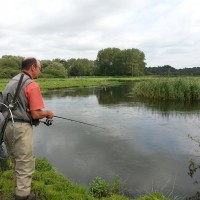 A day on the River Frome

I am not all about sea fishing! I love all types of fishing but to me river fishing on a Salmon river is something special. I was brought up on river fishing in Scotland and it will always be my true love. However the expense of fishing rivers in the South West of England is rather different to that in Scotland. You are more likely to pay more for a days Trout fishing on a chalk stream than a whole years Salmon fishing on most rivers in Scotland. So it was with great pleasure that I accepted an invitation from my friend David Byfield, to fish for Sea Trout on a stretch of the Frome, not far from Wareham.

To be honest given the rain that we had earlier in the week, I was not too confident that we would get anything as the water was still pretty coloured. That was not going to daunt me though, as we tackled up with size 4 silver Mepps to tackle the Sea Trout that start to build in good numbers in the Frome at this time of year. 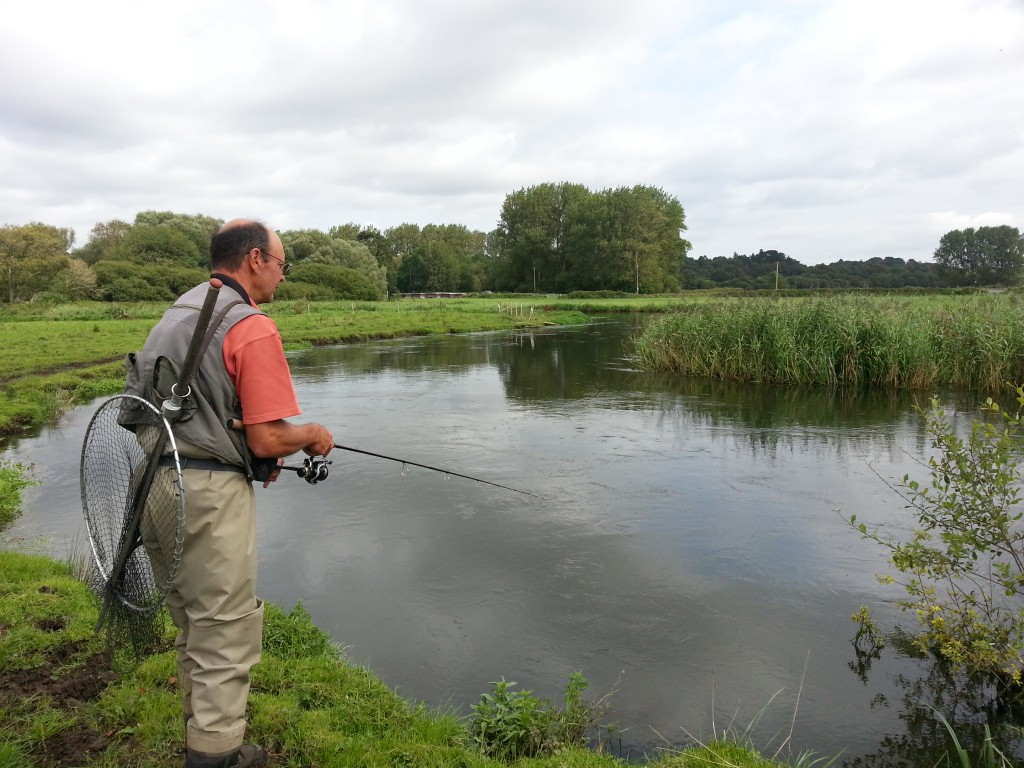 Fishing the River Frome in Dorset

We fished most of our allocated beat all morning and it was not until almost lunchtime that I started to have any success. I think it was a combination of getting used to fishing a Mepp upstream in fairly fast water and changing to a smaller size 3 Mepp that finally seen me into my first bit of action. As I came upstream to a lovely bend in the river that had a deep channel on the far bank with overhanging trees, I was certain there would be fish holding under the cover of the trees. Sure enough as I cast upstream and fished the Mepp just below me a nice Brown Trout showed some interest and followed the lure, turning away at the last moment, leaving me frustrated but excited at the same time. Next cast was slightly further upstream at a point where the water deepened right at the edge of a gravel bar. Almost straight away my by Mepp was hit by a small Sea Trout that took to the air in a dramatic fashion. In true Sea Trout style it had shed the hook within seconds and further enhanced my adrenalin. A few more vain attempts to tempt one of the other fish that I seen take flight when I hooked the other one, were to no avail. I continued moving upstream and after about 50m I found a nice little back eddy at the top of the pool. One cast to the far bank and as I watched the Mepp sink and start to spin, I could see a dark shape move out and hit the lure. Immediately I felt the weight of the fish and lifted into it. The fish headed down stream and David shouted over asking if I had a fish on, as he could see my rod bent over and hear the line coming off against the clutch. He came over to help me net it, but as it broke the surface I could see it was a small Jack Pike. He quickly netted it for me and helped me remove the trebles from its small but very sharp set of jaws. I took a moment to enjoy my first river caught fish for a couple of years before releasing it back into the river. 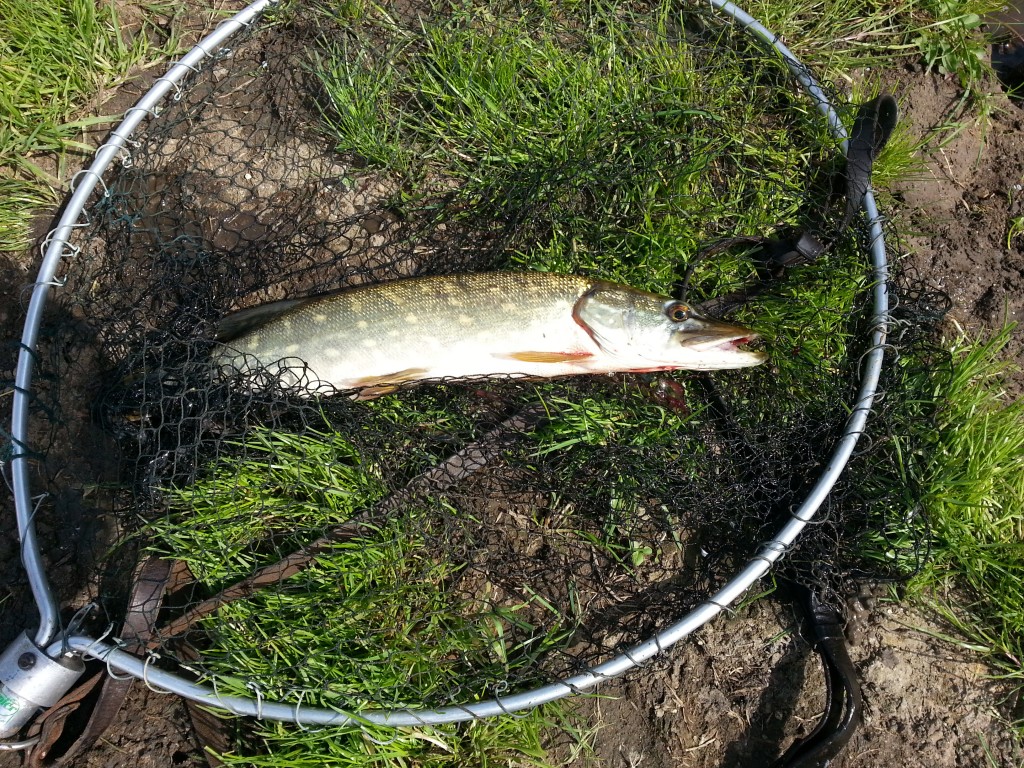 Jack Pike from the Frome on a Mepp

After a very sumptuous lunch and a glass or two of vintage cider I was keen to get back to our beat and see what else I could raise. My plan was to fish the section that I had caught on earlier and hopefully pick out one of the Sea Trout that should have gotten over being disturbed. On the way there we were discussing the stories about the Carp that had appeared in the river recently. I suggested to David that the slack water eddy that we had just passed looked ideal to hold Carp, and that as we had some bread rolls left he should try a few bits of bread to see if there was any interest there. We watched for a few minutes and nothing showed, so we moved on. As we got about 40m away I just glanced back over my shoulder and seen a fish swirl and take a piece of bread from the surface; back we went as stealthily as we could. David set up a 7ft 10-30g Savage Gear Bushwacker, And much to my horror he tied on a size 4 wide gape hook. “Do you not have anything smaller” I asked him. He just grinned at me and said “trust me we will need this”. I put a bit more bread in the swim to keep the fish interested and spotted it for him as he crept closer. I have just got myself a new mobile phone that I wanted for its video recording capabilities. After being an iPhone man forever I decided to give the Samsung Galaxy S3 a go. I was pretty happy with the outcome for a mobile phone; I will let the video tell the rest of the story.

That was a great start to the afternoon but obviously the fight had spoiled that pool, so we moved further down stream in search of the elusive Trout.

After another half hour of spinning through likely looking pools I had still been unable to get any interest from any Sea Trout. As I looked up river from the bottom of a back eddy I noticed two Carp of about 8lb just under the surface. I waved David over and took the little Savage Gear rod from him; it was my turn to have some fun. A few more bits of my roll went on to the surface, but initially the fish took no interest and after a few minutes they seemed to disappear upstream. I continued to fish the swim and just as I was about to give up I noticed at the far end of the swim a Carp slurping the bread of the surface. A quick flick out to get the drift of the bread right and all of a sudden the bait disappeared in the classic swirl that I have come to associate with hungry Carp. The Rod hooped over as the fish panicked and initially head out into the faster water and upstream. It realised that down stream was the way to go and it flew past me heading rapidly down with the faster flowing water, taking line against the clutch. Due to the winding nature of the river there was no way I could allow this fish to have too much line, so I had to set of after it in a run just to stop it taking additional line. As it sped past the first bend under the overhanging trees that I had hooked my Trout earlier, I could see at least 5 Sea Trout scatter to safety.

The fish certainly had the better of me at this stage as it kept heading down stream against the clutch and as much pressure as I dared put on the little rod. The line was singing in protest as I tried to rein in a hard fighting fish. I caught a glimpse of it as I managed to get some line back on the reel and it came up in the water just opposite me. I had greatly under estimated the initial size of the fish, this one was well into double figure and was broad and lean; a classic river Carp. I fought on and gradually lost line to the fish for the next 10 minutes, my main worry was a small footbridge about 3om downstream that the fish was determined to get past. No matter how much pressure I put on the fish was winning. We had to conquer this problem. David got to one side of the bridge and thankfully the fish headed for the far bank giving us just enough of an angle to pass the rod to David and sprint to the other side to get the rod again.

Just a bit further down stream was another bend in the river,  that I knew I would not be able to get over the double barbed wire fences and into the swamp like marsh that bordered the bank. It was make or break time now as I played the fish to the maximum ability the tackle would allow. With the rod arched over from the tip to the end of the but and me controlling the runs in short bursts, I was finally able to get the fishes head up and I could see the lovely flanks in the depths below. Another 5 minutes of ever shortening runs seen the fish come to the surface and thankfully rest on its side. David was quick to carefully net the fish. What a fish it was. We carefully weighed it in the net and it just nudged the magic 20lb mark. A quick photo and the fish was back in the water where we gave it plenty of time to recover before letting it swim away again. 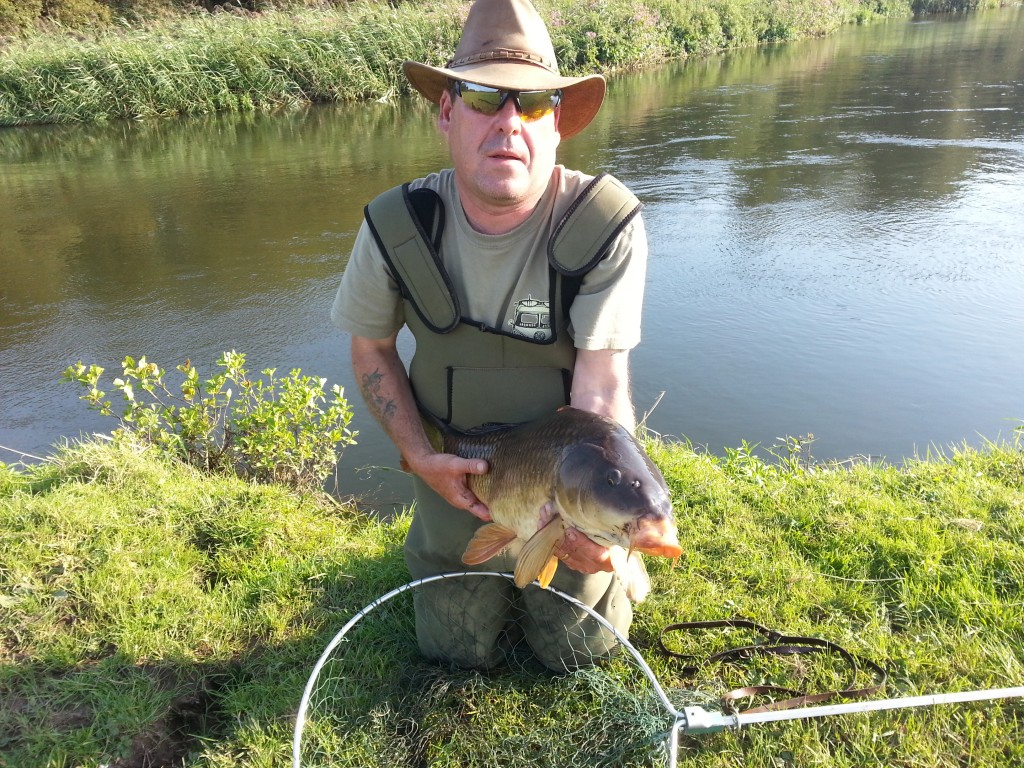 That was enough drama for me for the day. A great days fishing in lovely surroundings and brilliant company, what more can a man ask for?

One Response to "A day on the River Frome"